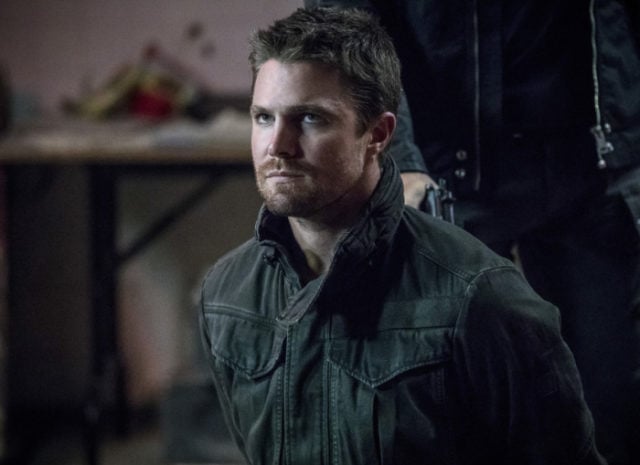 If there’s anything these past episodes of ArrowÂ Season 6 have proven, it’s that a little bit of Slade Wilson goes a long way. When the series first announced that it was going to be doing a Deathstroke-centric two-parter, I was excited because of how much I have enjoyed the character in the past. Despite how much I love Adrian Chase, Slade Wilson remains my favoriteÂ ArrowÂ villain of all-time, so getting the chance to spend more time with him on screen sounded like an enticing offer. Unfortunately, though, neither “Deathstroke Returns” or “Promises Kept” lived up to the hype I had created around them; even with some terrific action scenes (I particularly loved watching Oliver taking down all the members of the Jackals while Slade and Joe had their confrontation) and major reveals (Vigilante is actually Dinah’s partner, Slade has another son, Diggle is getting drugss from one of Star City’s biggest criminals), both of these episodes failed to capture the magic of the best installments ofÂ ArrowÂ and ended up being, overall, quite lackluster.

Easily the biggest problem with “Promises Kept,” though, is just how sidelined Oliver Queen feels in his own show. SomeÂ ArrowÂ fans joke about Oliver being their least favorite character because of how much of an idiot he can be, but no one really wants to watch a show about the Green Arrow without Oliver Queen being front and center. Even though Oliver has passed the bow and quiver on to Diggle for the time being, even though he’s not suiting up as the Emerald Archer to fight crime with the rest of the team, it doesn’t mean he should become a supporting character, and yet, through much of “Promises Kept,” it’s easy to forget that he’s there.

ArrowÂ becomes the Slade Wilson show, as the episode even treats Diggle and the rest of the team as afterthoughts, and maybe, somehow, that could work if this newer, kinder version of Slade had received more development before this two-episode arc. However, because we were only really introduced to him again back in the Season 5 finale, it’s difficult to care about Slade’s conflict throughout “Promises Kept,” as he struggles with the impossible decision of what to do to stop Joe. The only real reason we connect with Slade’s storyline in the first place is because of how it mirrors Oliver’s relationship with William, but even that detail is mostly ignored throughout “Promises Kept,” until, in one of the episode’s best scenes, Oliver convinces Slade that killing Joe is not the only choice he has, reminding him that they came together to save their sons.

The reveal that Joe has a brother, a son that Slade never knew about, does provide this episode with a somewhat interesting twist, which could giveÂ ArrowÂ the opportunity to do a similar storyline to this one in a better way at some point in the future. I’m honestly not sure if I would want the show to try again, though, because even though Slade discovering that it was his own violent actions that influenced Joe at young age should have had an emotional impact on me, it didn’t. Honestly, the only parts of Slade’s story that work in “Promises Kept” are the flashback sequences that showcase his descent into madness, as the effects of the Mirakuru and the visions of Shado (the always lovely Celina Jade) begin to haunt his mind. I’m just not sure how many more engaging Slade Wilson stories there are left forÂ ArrowÂ to tell, and that’s okayâ€”Slade can still come back to Star City to help Oliver or stir up trouble with the team. Just don’t make him the main character for two straight episodes ever again.

SomeoneÂ ArrowÂ could make its main character for a couple of episodes if the writers really wanted to is John Diggle, who doesn’t get as much focus as Slade does in “Promises Kept” but still makes a major decision during the hour. After discovering that the drug he has been using to stabilize his tremor comes from a Star City drug lord known as The Dragon (Kirk Acevedo), Diggle must make a choice: does he allow one drug dealer to remain free so he can get the fix he needs to lead Team Arrow, or does he take him and his organization down and risk losing his position as leader of the team?

Ultimately, Dig makes the right decision to go after Dragon and his men, but during Team Arrow’s takedown of the criminals, he reaches a new low point when he considers running through flames to try and steal as much of the drug as he can before it is destroyed. Of course, Diggle doesn’t actually go through the fire, but his hesitation there serves as a wake-up call, which is why he’s finally honest with not just Lyla (SO GOOD to see Lyla back on this show) but also Rene, Curtis, and Dinah.

While I don’t completely buy the conflict that Diggle goes through in this episode (I just don’t believe someone like John Diggle would EVER consider letting a drug dealer go free for any reason), I am relieved that he tells the truth to Team Arrow. He’s been keeping this secret since the Season 6 premiere, and as we’ve seen before on these DC TV shows, secrets being kept for too long does nothing but create cheap, manufactured drama that no one enjoys.

What’s most satisfying about how this whole storyline plays out, though, is how everyone reacts when Diggle tells them: Lyla is disappointed but mostly concerned, Rene understands that Diggle was only trying to look out for him and the rest of the team, Curtis is enthusiastic to try and help John deal with this problem, and Dinah is more or less indifferent because of the secret that she’s hiding about Vincent. These are all believable, realistic responses to what Diggle is going through. Only one question remains, though: How will Oliver and Felicity react when they hear the news? No matter what their responses are, I’m betting what they have to say will be more entertaining than watching Slade Wilson and his son bicker back and forth.

What did everyone else think about this week’s episode ofÂ Arrow? Were you as disappointed with the Slade two-parter as I was? Comment below and let me know.

Slade and Oliver try to stop Joe and the Jackals, and Diggle is finally honest with the team in a lackluster episode of Arrow.