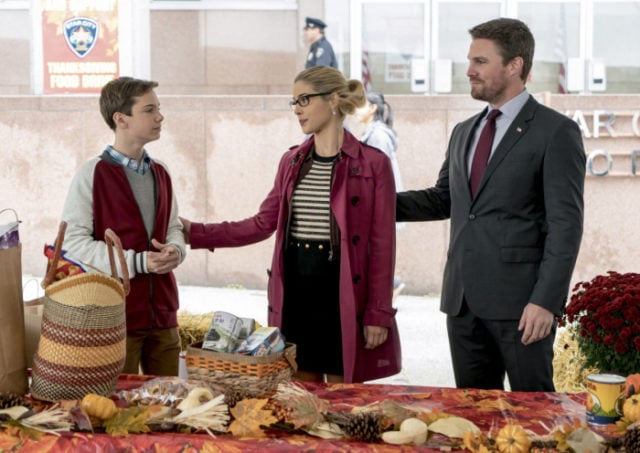 After transforming into the Slade Wilson Variety Hour for the past two weeks, ArrowÂ is finally back to being ArrowÂ in this week’s strong episode, as Oliver’s Thanksgiving celebrations are interrupted in a major way by both Agent Watson and Cayden James. Watson strikes first, arresting Oliver for being the Green Arrow at a Star City fundraising event he attends with Felicity and William. While Oliver is able to get out on bail for the time being (thanks to the money that Felicity was supposed to use towards her and Curtis’s start-up), this fight is far from over, as a huge trial looms in the distance, a trial in which Watson has some type of evidence up her sleeve and no one can seem to figure out what it could be.

At the same time as Oliver’s arrest, Cayden James, along with Black Siren, steals materials used to create a massive bomb that can essentially “pressure-cook” the thousands of people in attendance at a Billy Joel concert at Starling Stadium. By episode’s end, it’s revealed that the bomb threat is all a ruse, simply a way for James to get a face-to-face with Oliver as the Green Arrow so that he can tell him that he cost him his son. When “Thanksgiving” is over, it’s still unclear who exactly James’s son is and what Oliver, and by extension, the team may have done to him in the past. However, James’s plot does serve one other purpose: by releasing footage of Team Arrow taking down his henchmen disguised as police officers, James convinces the people of Star City to vote for the Anti-Vigilante Referendum, ensuring that protecting the streets is going to get a lot harder for the team as Season 6 continues.

Despite how important some of these major plot developments are, though, they aren’t what make “Thanksgiving” stand out as a solid episode of Arrow. After two uneven installments that failed to connect with me (and other fans) emotionally, this week’s hour delivers some of the most powerful scenes of the season so far, and the best part about these scenes are that, for the most part, they include Oliver Queen, who has felt like a supporting character in his own show for the past two weeks. Fortunately, “Thanksgiving” not only puts Oliver back in the Green Arrow suit and throws him out into the field but also gives him some dynamic sequences with the people who are most important to him.

The two standout scenes from “Thanksgiving” feature Oliver and Diggle sitting in Dig’s hospital room when Oliver confronts his best friend after Felicity tells him the truth about John’s nerve damage. The conversations that follow are rich and complex; aside from Felicity and Thea, Oliver and Diggle are the only two characters on Arrow with as much depth and as much history that can discuss these huge issues in such personal and intimate ways. The discussion over John’s health (which worsens throughout “Thanksgiving” due to withdrawal from the experimental steroid he was taking and Curtis’s new implant) becomes a battle over trust and sacrifice between the two longtime friends; Oliver tells Dig that this is the first time he’s ever been truly disappointed in him, while Diggle fights back, saying how he’s risked everything for Oliver and his family throughout the years. “I don’t owe you a damn thing,” he tells him.

After their initial blowout, cooler heads prevail for both Oliver and Diggle. When Oliver returns to the hospital, he apologizes to John for taking him and his loyalty for granted over the years, while Diggle is honest with Oliver about why he really took on the mantle of Green Arrow, referencing the dream world from last year’s crossover. It wasn’t a selfless act he was taking for his friend; Diggle wanted to be the Green Arrow for himself–it’s what makes him the happiest, it’s what makes him most complete. The real reason why he hid his nerve damage for so long wasn’t because he was worried about letting Oliver down–he didn’t want his health to strip him of this opportunity to be the team’s leader, to be the hero of Star City.

And that’s an opportunity that Dig will have again as soon as his health improves. Oliver will begrudgingly be the Green Arrow again until his best friend heals because the team needs a leader, and with Cayden James out for revenge, that’s what’s most important right now. However, family is also incredibly important to Oliver Queen. How long will he be able to lie to his son?

Oliver has made it clear that he wants to be honest with William and spend time with him; he wants to be the best father he can be, and being the Green Arrow doesn’t allow him to do that. Will there ever be a time he can be both? Oliver doesn’t seem to think so right now, but you can tell that he’s not truly sure. Thankfully, though, he’s got a sister who’s pretty good at giving advice, and she has just woken up from a coma. Thea Queen is back, everyone, and I can’t wait to see how she fits into this new version of the Queen family. If that touching final scene in “Thanksgiving” is any indication, I’d say pretty damn well.

What did everyone else think about this week’s episode ofÂ Arrow? Are you excited for next week’s two-night, four-part crossover? Comment below and let me know.

Agent Watson and Cayden James interrupt Oliver’s Thanksgiving as Arrow gets back on track in a strong episode.