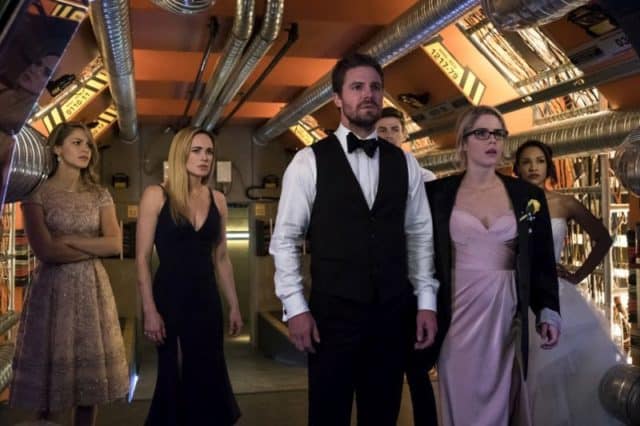 It’s that time of the year again, DC TV fans! Our favorite superheros have teamed back up for an epic, four-part crossover, and tonight’s Arrow, “Crisis On Earth-X, Part 2,” is, as you would expect from the title, part two of that four-hour crossover, following the opening chapter that was tonight’sÂ Supergirl. Oliver, Felicity, Kara, Sara, and many other characters from their respective shows have gathered together for Barry and Iris’s wedding, but the ceremony is violently interrupted by a group of villainous doppelgangers from Earth-X, the 53rd earth in the multiverse, a world in which the Nazis win World War II and now have their sights on conquering other universes as well.

Tonight’s Arrow picks up where the first part of “Crisis On Earth-X” leaves off: Our heroes have fended off the villains for now and have taken Earth-X’s Prometheus captive, holding him in one of the cells at STAR Labs. In a fun twist (one the actually fulfills many ArrowÂ fans’ Prometheus theories from Season 5), this version of Prometheus is Tommy Merlyn, with Colin Donnell returning for a couple of scenes, providing even more emotion to what is already a pretty powerful episode.

And why is tonight’s Arrow so powerful? Well, aside from the amazing action (wonderfully directed by James Bamford) and the never-gets-old epicness of seeing these heroes onscreen together again, the reason why “Crisis On Earth-X, Part 2” works so well is because of the richness of the characters’ relationships. Similar to the depth of Oliver and Diggle’s bond, which we saw on full display in last Thursday’s Thanksgiving episode, there’s a strength and intensity to so many of the connections shown throughout “Crisis On Earth-X, Part 2” and that’s all because of the history these characters share. The reason why that conversation between Oliver and Evil Tommy is so effective is because of howÂ ArrowÂ has depicted their brotherhood in the past and the lasting impact that Tommy has had on Oliver for years, going back to one of Season 2’s very best episodes, “Three Ghosts.” And the same can be said for Oliver and Felicity, who take center stage for most of “Part 2,” along with “Part 1,” as they disagree over whether or not they should get married after Oliver impulsively proposes to her during Barry and Iris’s rehearsal dinner.

ArrowÂ fans have seen Oliver and Felicity clash before in the past, but what makes this conflict so different than many of the ones we’ve seen before is that it is the byproduct of honesty, not deception. The fight that Oliver and Felicity have in “Crisis On Earth-X, Part 2” is not manufactured drama, the result of Oliver lying yet again or Felicity hiding something from himâ€”the two of them are past that and have been since their conversations in “Underneath.” Instead, Felicity’s fear of marrying Oliver, of screwing up the great thing they currently have, comes from traumaâ€”the trauma she endured after being shot when they first got engaged two years ago, the trauma that Felicity still carries with her every day, even though the spinal implant allows her to walk. Although Felicity logically knows that the bullet from Darhk’s men isn’t what caused her and Oliver’s relationship to crumble, that it isn’t what started “the beginning of the end” as she calls it when she talks to Iris, the fear and pain she suffered during that time overwhelms her. Those memories of fear and pain currently cloud her judgment so that she can’t see how different this time is than the last time, that she and Oliver are stronger, better, and more mature now, that no type of lying will ever get in the way of their relationship again because this new foundation they have created between them is entirely built on trust.

And that foundation is fortified even more so when Felicity expresses these worries to Oliver and explains her trepidation about marriage and when Oliver accepts her decision and respects where she is coming from. Is it unfortunate that Felicity then overhears his concern about whether or not she loves him as much as he loves her, a fear that Oliver confesses to Barry and Iris when he believes no one else is listening? Of course it is. But hey, it wouldn’t be a DC TV crossover if there wasn’t at least a little manufactured drama thrown into it. For the most part, though, this episode features Oliver and Felicity at their most honest and communicative, and that’s when these two charactersÂ  (andÂ ArrowÂ itself) areÂ at their best. Hopefully, by crossover’s end, Felicity will not allow her worry to stop her from having everything she desires, from having the dream that she and Oliver talked about after they returned to Star City from Ivy Town. Something tells me that will happen, but we’ll have to wait until tomorrow night’s crossover conclusion to see how it all plays out.

Because right now, Oliver and Felicity have bigger, much more deadly problems to resolve. The end of “Crisis On Earth-X, Part 2” leaves them both in very dangerous positions: Oliver, along with Barry, Sara, Jax, Stein, and Alex, has been transported to a prison camp on Earth-X, as Evil Oliver and Evil Kara prepare to use the prism to help surgically remove Kara’s heart so that Evil Kara can continue to live. Meanwhile, Felicity and Iris are trapped inside STAR Labs with Earth-X guards and need to find a way to not only escape but also rescue the captive members of Team Arrow (Did you see those Nazi bastards putting Rene in a cell?).

Overall, it’s a strong cliffhanger to leave fans off on as we wait for tomorrow night’sÂ The FlashÂ andÂ Legends Of TomorrowÂ toÂ wrap up this sprawling story, and although I thoroughly enjoyed last year’s “Invasion” crossover, I have to admit that “Crisis On Earth-X” has gotten off to an even better start. That’s probably because all of these CW comic book series are at their very best when they’re digging in deeply to the relationships between the shows’ most layered and developed characters instead of simply supplying us with dazzling but ultimately meaningless superhero action. Putting major players like Oliver and Felicity and Kara and Alex and Barry and Iris at the forefront of this crossover storyline has been a smart move so far. Let’s hope they continue to have the spotlight tomorrow night, even when the playing field gets a little more crowded with the rest of the LegendsÂ team joining in on the fun.

What did everyone else think about tonight’sÂ ArrowÂ and the first half of “Crisis on Earth-X” as a whole? Did you enjoy “Part 1” or “Part 2” more? What were some of your favorite moments? Comment below and let me know.

Oliver, Barry, Kara, and more heroes fight against the evil villains from Earth-X in an excellent episode of Arrow.