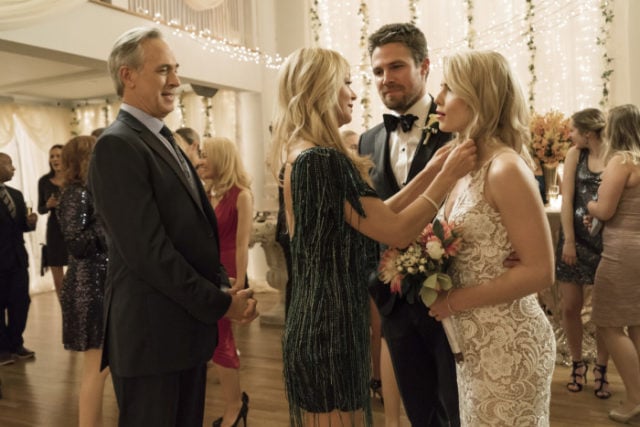 After bouncing back from the two-part Deathstroke arc with twoÂ strongÂ  episodes, ArrowÂ takes another slight misstep again in tonight’s mid-season finale, “Irreconcilable Differences.” There’s a lot of fantastic moments in this episode, most of them taking place at Oliver and Felicity’s wedding celebration, as the two of them are surrounded by family and friends: Felicity’s mother and father walk her into the party as if they’re walking her down the aisle, Dig dances to Pink’s “Raise Your Glass” alongside Thea and William, and Quentin presents Oliver with the watch that his father gave to him on his own wedding day. That Oliver/Quentin scene is easily my favorite moment of the episode, because unlike the manufactured drama that follows the wedding, it’s a moment that’s honest and believable, a moment that has been earned by nearly six seasons of character development. We’ve seen Quentin Lance transform from the man who hated Oliver Queen more than anyone else in Star City to a surrogate father to the vigilante mayor. “Itâ€™s not right you donâ€™t have a parent here tonight,” Quentin tells Oliver, and whether Lance realizes it or not, he does a fantastic job of slipping into those parental shoes and providing Oliver with the family he needs during that exchange. Such wonderful writing.

And even though Rene’s actions later on in the episode slightly taint his emotional speech, the words he delivers are also wonderful and extremely heartfelt.Â He calls Oliver and Felicity the most genuine people he knows, describing how they would do anything and everything for each other and that they are essentially the best representation of true love. However, anyÂ ArrowÂ fan watching doesn’t need to hear Rene’s words to know all of that is true; they just have to watch the performances of Stephen Amell and Emily Bett Rickards, who say so much with barely any dialogue during those opening scenes. For once, Oliver and Felicity find peace not in Ivy Town or on a beach somewhere but in their own home, in Star City, and even though it barely lasts a night, it’s more than enough for them, as one can tell by their beaming smiles and body language.

It doesn’t matter that their superheroes; Oliver Queen and Felicity Smoak are regular ol’ newlyweds, and they enjoy every single second of it because neither of them believed they’d ever have it. Oliver was a broken shell of a human being and Felicity was a lonely IT girl consumed with the fantasy of doing something more,Â  and they found their way to each other, through all the violence and the pain and the heartbreak. They’ve been each other’s constants for the last six years, through Slade Wilson and Ra’s al Ghul and Prometheus, through all the crazy variables that life has thrown their way. They deserve to have this time together, and it’s the closest “Irreconcilable Differences” comes to a happy ending.

Because following Oliver and Felicity’s party, we get thrown into a black hole of unnecessary, BS drama that feels like it only exists to try and “shake things up” rather than push this season’s story forward in real, captivating ways. Pretty much all of this eye roll-inducing conflict stems from the news that someone on Team Arrow has betrayed Oliver and is planning on testifying against him. Ultimately, it’s revealed to be Rene, who comes clean and says that he agreed to help Watson to ensure that he and Zoe would be reunited, but Oliver, Felicity and Diggle deciding to spy on all three of their fellow teammates causes an irreparable rift in the group, one that sees Oliver kicking Rene off the team when he disobeys him out in the field and Dinah and Curtis leaving the team of their own free will because they can’t trust the OTA members anymore.

What bothers me so much about this storyline is that every single member of Team Arrow, especially Oliver, Diggle, and Felicity, has seen how lies have torn the team apart in the past. Secrets held in order to protect others or to protect oneself almost always end up resulting in an explosion of anger and distrust that typically takes weeks, if not months, to repair. Therefore, I object to the idea that Rene wouldn’t at least talk to Oliver first before making his deal with Watson, and I also don’t believe that Oliver would choose to spy on all three of his teammates rather than have an upfront conversation with them. I do like that theÂ ArrowÂ writers smartly brought in Evelyn’s betrayal from last season as a motivator here; it grounds the storyline in a somewhat realistic manner. However, Evelyn’s deceit alone should not be enough to blind Oliver to the potential repercussions of his actions, to the fact that honesty and trust are essential components of the team’s DNA and he’s dismissing them in his anger-charged pursuit.

What makes this whole story even worse is that Team Arrow is being controlled like puppets without even knowing it. The final moments of “Irreconcilable Differences” reveal that Cayden James has been working with some villainous partners, including Vigilante and Dragon, to break the superhero team apart, thanks in large part to the secret camera that Black Siren installed two months ago. This is only the beginning of James’s devious plan, and while the prospect of connecting all these seemingly disparate villains together in one evil group excites me, I’m not sure any fun, future storylines with these evildoers are worth sacrificing the intelligence and integrity of our central characters. Seriously, how have tech geniuses like Felicity or Curtis not realized that a hidden camera has been implanted inside of the bunker?

To be honest, the only good thing that comes out of this whole Newbies vs. OTA storyline is that it provides Thea with the chance to give Oliver some amazing advice, the type of advice that both he and the audience have been missing while Thea’s been comatose the first half of this season. â€œHow can I feel betrayed by someone whoâ€™s done the exact same things Iâ€™ve done?” Oliver asks Thea. She responds by encouraging him to keep looking at the situation through Rene’s point of view so that he can find similarities with Rene’s choice and his own past actions, thus building a path towards forgiveness.

Now that Rene has broken Oliver’s trust for a second time, though, by not listening to his instructions out in the field, is forgiveness still an option? Will Oliver be able to have faith in Rene again? Will we see the former friends fighting crime alongside one another? Since Rick Gonzales is still a series regular onÂ Arrow, all signs point to “yes” and probably before Season 6 has concluded. But I also strongly believe thatÂ ArrowÂ will feel like a much different show for at least a little while when it returns with new episodes in January, a show split between two teams, a show that remembers the old guard while also embracing the new.

What did everyone else think about tonight’s mid-season finale ofÂ Arrow? Were you as let down as I was? What are your thoughts on Season 6 as a whole? Comment below and let me know.

Oliver and Felicity celebrate their new marriage, and manufactured causes conflict with the team in Arrow‘s underwhelming mid-season finale.