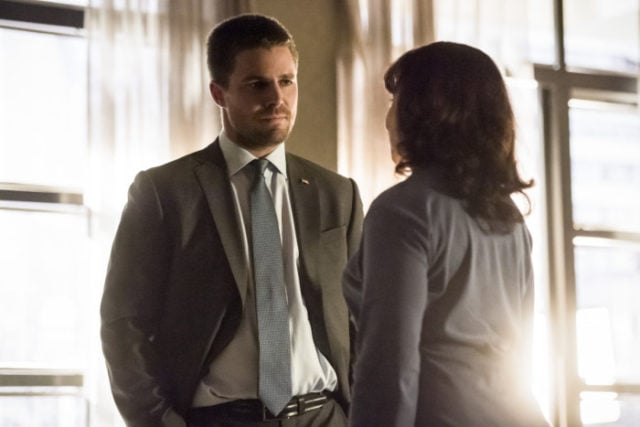 Following last season’s literally explosive finale, the ArrowÂ Season 6 premiere had a lot to live up. Season 5 of the CW superhero drama is considered by many to be one of its best seasons, if not the best, and it reached such dramatic heights by the end of its 23 episodes. There was absolutely no chance that the Arrow Season 6 premiere could keep that same intensity going, and “Fallout” doesn’t even attempt to. Despite the numerous action sequences, from Oliver and Dig taking down henchmen together in the Arrowcave to the two face-offs that Black Canary and Black Siren have, thisÂ ArrowÂ premiereÂ is a quieter, more contemplative episode of television, one that tries to examine how the events on Lian Yu five months ago changed all of our main characters’ lives for better and for worse.

The two men at the focus of this examination are Oliver and Quentin, who both are struggling with the idea of what it means to be a father in very different ways. Oliver questions every single word and action he takes with William, whom he is now the sole parent of after Samantha dies in Chase’s explosion from last season; Samantha uses her dying words to tell Oliver to be a true father to William, but how can he be a source of love and comfort to his son when all William sees when he looks at him is the “bad man” that’s responsible for his mother’s death?

Meanwhile, Quentin struggles with a secret that only Dinah knows: he shot and believed he had killed Earth-2 Laurel, Black Siren, on Lian Yu in order to save Dinah’s life. However, even though he was protecting his friend, Quentin still can’t believe he was able to pull the trigger on his own daughter. As he tells Oliver later in this episode, it doesn’t matter that she’s from a parallel universe; there’s an unspoken, unshakable connection that he feels to Black Sirenâ€”she is still every bit his daughter as the Laurel that was killed by Damien Darhk. That bond that Quentin feels with Black Siren, despite her villainous actions throughout this episode, is what causes him to nearly relapse into drinking and what also stops him from pulling the trigger again on his Earth-2 daughter after she escapes the Arrowcave near the end of the premiere.

Although the specifics of Oliver and Quentin’s situations are entirely different, both men are able to find common ground in their conversations with each other. Neither of them says anything too insightful or profound. Oliver keeps reminding Quentin about how good of a father he has always been to Laurel and Sara and also tells him to not wallow in guilt like Oliver has so many times before. Meanwhile, Quentin tells Oliver to forget about his fears and worries when it comes to William and just show upâ€”just be a father, which is why Oliver tells William that he can feel whatever way he wants to about Oliver but he’s never going to leave him because that’s what a father does, he stays with and stands by his son. By the end of the premiere, neither of them have completely overcome these hurdles; however, they’re making slow and steady progress, and they both have strong women by their side to help them as their journeys continue, as Oliver can turn to both Raisa and Felicity (who serve as symbols of the good man he always was and the better man he has transformed into) and Quentin can lean on Dinah, who in many ways has become a type of surrogate daughter to him, much like Thea was throughout Season 5.

And speaking of Thea, she is unfortunately the main character that suffers the worst from Chase’s evil plan. While Oliver and Slade initially believe she’s dead when they find her on the island, we discover during the final minutes of the premiere she is actually alive but totally unconscious and in Star City hospital. Given that Willa Holland is still a series regular on the show, I’m expecting that Thea will wake up and find her way on the road to recovery sooner rather than later this season. But even when that does happen, it doesn’t take away the pain Oliver must feel over his sister’s condition, which has to also amplify the guilt and worry he feels towards William.

Unlike in past seasons, though, Oliver Queen is handling these challenges in mature, non-destructive ways, a welcome sign of growth given the evolution he went through during Season 5. However, even if Oliver feels like he’s handling his current issues well, he still has to be concerned about how he’s going to deal with the major problem he’s handed at the end of the Season 6 premiere, as crystal-clear photos of him as the Green Arrow are made public on the news. How will Star City’s mayor explain the fact that he’s also the city’s vigilante, an individual that is still considered to be a criminal after last season? I have no idea, and I’m anxious to find out.

What did everyone else think about tonight’s Arrow Season 6 premiere? Are you excited for the season ahead? Comment below and let me know.

Oliver and the rest of the team deal with the consequences of last season’s deadly explosion in the solid Arrow Season 6 premiere.