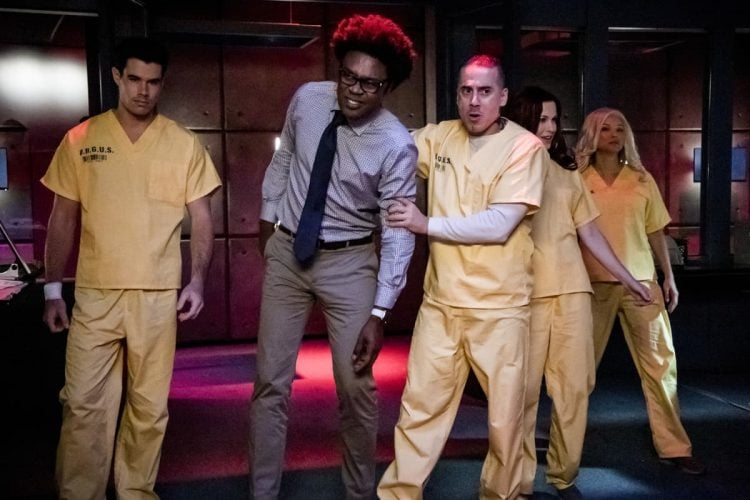 There’s not much to say about this week’s episode ofÂ Arrow, which despite some solid direction from John Diggle himself, David Ramsey, features almost no significant character or story developments, or at least not ones that are as compelling as they could be. And again, that’s no fault of the direction. Ramsey does well in his first time in the director’s chair, especially when he’s capturing the unique, literally electrifying powers of Hackett’s son, Sam, but the lack of meaty, gripping storylines in “Past Sins” guarantees that, no matter who the director is, there’s no saving this lackluster hour.

That’s not to say that there’s no interesting or entertaining ideas in “Past Sins.” While I couldn’t care less about Curtis’s problems with ARGUS tactics (sorry, dude, but you don’t get to take the moral high ground about treatment of violent criminals after you deactivated Dig’s chip last year for stupid, petty reasons), the continued evolution of Black Siren remains a story that I am invested in, mainly because of the enjoyable friendship that has blossomed between her and Felicity. Earth-2 Laurel’s genuine surprise that Felicity had invited her out to a celebration dinner is sweet and charming, and while it’s a bit ridiculous that she’s already considered the most popular D.A. in Star City history, I am open to seeing more stories about her in this new role, featuring both her successes and her failures.

What I’m less open to, however, is the lazy, unoriginal backstory that “Past Sins” provides Black Siren with. It makes sense that she would blame herself for her father’s death given the circumstances surrounding it, but this type of storyline, the spoiled daughter forcing her parent to go out and get her a birthday cake or a birthday present or any other type of item, has been done countless times before in both television and film. And frankly, it’s been done much better than what theÂ ArrowÂ writers presented viewers with this week. Why not try to do something more complicated or creative or just plain different? Because even if that different type of story for Black Siren doesn’t work, it can at least be applauded for being something ambitious or unique rather than same, tired, recycled, Lifetime movie plot.

The most intriguing and emotionally captivating story in “Past Sins” is Oliver’s attempt to reach out to Emiko while also continuing to face the sins of their father. While I don’t think I needed an entire episode dedicated to Oliver reconciling with Robert’s decision to kill Hackett, I do applaud Beth Schwartz and theÂ ArrowÂ writers for tackling this loose thread, which always seems to be forgotten about whenever the series discusses Oliver’s survival on Lian Yu. Oliver confronting this issue head-on is important for two reasons: First, it shows, yet again, that he rejects his father’s selfish, self-centered tendencies (the idea that, as Hackett’s son Sam says, a Queen’s life is more important than anyone else’s). Second, and more importantly, he reaffirms the new approach he has taken not just to his heroics on the streets of Star City but to life in general.

As Oliver tells Emiko, being transparent is about more than simply just not wearing a hood and a mask anymore. It’s taking ownership of your flaws, of your lies, of your, as the episode’s title suggests, past sins, and making an effort to do better. Oliver has done that for the people of Star City, showing his face and joining the SCPD to take criminals down the right way. He has done that with his wife and son, apologizing for withholding information from them and making decisions without their input and reassuring them that they are, in fact, a team that works together. And now he’s trying to live transparently with his newly discovered sister, who, by the end of this week’sÂ Arrow, may not be ready to talk but is at leastÂ thinkingÂ about talking. And no matter how she feels, whether or not she’s willing and ready to dive into this strange, new family dynamic with Oliver, at least she’s being transparent with him as well. The foundation for any good relationship is honesty. Hopefully, the trust between the Queen siblings is beginning to be established, so that they can continue to move forward together without trepidation or concern, without the shackles of their father’s past mistakes holding them back.