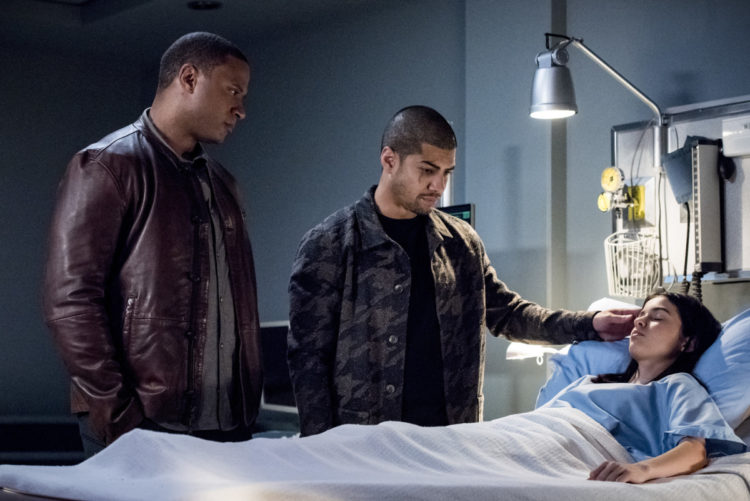 There’s a lot to admire about this week’s episode of Arrow, even if not every storyline during the hour comes together as well as other stories have over the first few weeks of Season 7. For example, much of the conflict between Dinah and Rene feels like manufactured drama, a plot whose sole purpose is to lead to Dinah giving Zoe the Canary pin so that we can be “surprised” when an adult version of Rene’s daughter appears in the flash-forwards at the end of the hour. Still though, even that mostly predictable story still provides “Level Two” with a strong scene between Diggle and Dinah, where the two former vigilantes are forced to confront what kind of people they want to be now that they are no longer members of Team Arrow. Both of them reflect on not just how they can fight for justice and uphold the legacy of Oliver but also how they can emulate other important figures in their lives, such as Dinah attempting to model her new tenure as police captain after the late Quentin Lance.

The same could be said for Oliver’s prison therapy storyline in “Level Two,” which mostly serves as a rehash of the issues that Prometheus made Oliver confront back in the Season 5 episode, “Kapiushon.” Dr. Parker’s methods aren’t as violent or physically brutal as Adrian Chase’s, but they clearly have a mental toll on Oliver. He’s forced to not only relive the death of his own father but also imagine himself in Robert’s role in a fantasy sequence that sees him and William as the father and son stranded on the life raft after theÂ Queen’s GambitÂ sinks.

It’s this particular scene between Oliver and William that acts as the silver lining for this plot; although many of Oliver’s realizations about Robert feel redundant, the words he speaks to William during his hallucination offer something new, something more raw, honest, and emotional than Oliver being told for the millionth time that his father wasn’t a good man. Because during this heartbreaking situation with his son, Oliver uses his final moments with William not to ask that he do anything for him or challenge him to be a better man; in fact, he only has one simple request for William: live. “You’re going to make it through this. You’re going to get off this raft. You’re going to have amazing life because you’re destined for great things,” Oliver says to William before reminding him one last time how much he loves him. These are the words that Oliver wishes he had heard from Robert in their last minutes together, a reassurance that Oliver was good and strong and worthy of love, and if he had heard that message instead of the order from Robert to wash away his sins, perhaps Oliver wouldn’t have returned to Star City with a mission. Maybe he doesn’t become the Hood and, eventually, the Green Arrow. But he also doesn’t meet John Diggle. Or Felicity Smoak. And he probably doesn’t meet and help raise William either. All these people who have helped shape Oliver, who have helped mold him into the person he is today nearly seven years after he finally escaped Lian Yu, may have never been present in his life if it wasn’t for the quest that Robert bestowed upon him. And although Oliver wishes things had happened differently, he can’t just wipe away his identity and become an entirely new person.

Or can he? By the end of this week’sÂ Arrow, it becomes clear what Dr. Parker’s goal is as he has Oliver undergo these “therapy” sessions. He wants Oliver to forget who he is, forget that he’s the Green Arrow, forget that he has a city and family to fight for, forget that he’s Oliver Queen. That’s why the doctor looks so pleased when Oliver states his name as “Inmate 4587” during one of the final scenes of “Level Two.” His “treatment” sessions with Oliver are working; Star City’s hero is forgetting who he is, and if he can’t hold on to that, if he can no longer believe in himself, then prison is a much scarier, more dangerous place than it ever was before. Because if Oliver Queen can’t remember what separates him from his fellow inmates, if he can’t remember that he’s a hero and not a criminal, if he’s not willing to fight back for those he loves, then he’s more lost than he’s ever been before.

Hopefully, Felicity’s quest to take down Diaz won’t lead her down a similar path to what Oliver is currently going through. However, given the extreme lengths she’s willing to go to find him (She tells Rene that torturing Silencer isn’t off the table early on in “Level Two”), I could foresee a situation in which both Oliver and Felicity lose themselves only to rediscover their identities through the help of each other again. (As I mentioned above,Â a lotÂ of this episode feels like Season 5, and that type of Oliver/Felicity storyline would also be reminiscent of what happens between them inÂ “Underneath.”)

For now, though, Felicity has the unlikely ally of Black Siren, and while their back-and-forth bickering is fun, the two best scenes between the frenemies are when they fake a fight that allows Silencer to escape so that they can track her back to Diaz and when Black Siren takes a moment to warn Felicity about the emotional cost of what she’s doing. Similar to her apology to Dinah a couple of episodes ago, Black Siren’s concern over Felicity’s moral conscience feels genuine in a way that almost none of her scenes with Quentin last season did, and this exchange brings some much needed humanity to Earth-2 Laurel without removing any of her snark or bite. This conversation is informed by Black Siren’s personal journey up until this point; she’s been someone who has let revenge consume her, and she understands just how great of an impact it can have on an individual’s soul. She wants to make sure Felicity is aware of the irreversible changes she may be dealing with if she continues with her vendetta against Diaz. Unlike Oliver, Felicity gets to be an active participant in her character’s transformation, as she keeps reaffirming her agency with each and every episode. However, just like her husband, Felicity also risks losing herself in this process to get Diaz; if those she loves can no longer recognize her, then will this mission have actually been worth it? These next few episodes should answer that question for us. I’m anxious to see what happens.