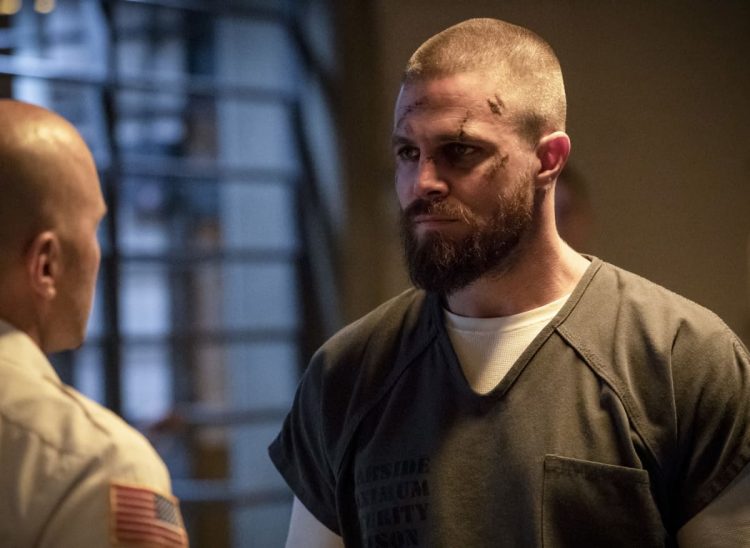 “The Demon” doesn’t break any new ground for Arrow. In fact, much of this episode repeats major themes and even memorable lines that we’ve seen before on the show in seasons past. Talia’s reappearance brings Oliver’s Man vs. the Monster debate from Season 5 back to the forefront, and when the former Green Arrow battles against Dr. Parker and his goons, who repeatedly tell him that he’s nothing more than “Inmate 4587,” he responds with Oliver’s battle cry from the Season 3 finale, the same one that he uttered at Ra’s al Ghul when he insisted that he was Al Sah-Him: “My name is Oliver Queen!” In a way, a lot of this week’sÂ ArrowÂ plays like some of the show’s greatest hits (well, aside from that Diggle/Curtis storyline, which just features Curtis complaining for the umpteenth time), and after Season 6 lost so much focus on what makesÂ ArrowÂ entertainingÂ on a week to week basis, I’m more happy to enjoy some thematic comfort food.

Because that’s really what “The Demon” is. Aside from the new, fun dynamic between Felicity, Laurel, and Dinah (which we’ll get to later), this hour reinforces a lot of the same themes that the series has featured throughout its first six years and especially in its third and fifth seasons. We’ve seen Oliver confront his murderous demons before. We’ve seen him struggle to reclaim his identity when others in power try to erase who he is. We’ve seen him refute the idea that he needs to separate his vigilante alter ego from his life as husband, father, and friend. But we’ve also seen him to do all these things with the help and support of his loved ones, with people like Felicity and Diggle by his side. The one main, key difference thatÂ ArrowÂ Season 7 is illustrating with Oliver’s prison storyline is that he has absorbed the wisdom, love, and help from those closest to him over the years; even if they are not physically with him, they stillÂ  reside in his heart, and he can hear their guiding words leading him to the right choice, even if it’s the difficult choice, as he encounters each new obstacle while in prison.

Additionally, it’s important to point out that Oliver chooses to not deny his true identity when he reunites with Talia, who serves as the physical representation of that initial separation between the man he presented himself to be and the true vigilante he was hiding underneath the facade. Talia is the one who originally taught Oliver to compartmentalize the different parts of himself, and with her reminding him of those lessons throughout “The Demon,” it would be so easy for him to slip back into that type of mindset, into the belief that he needed to deny the Oliver Queen side of himself in order to become (get ready to groan, readers) someone else, something else. However, Oliver never succumbs to her pressures, even when she brings up his father and William. “But if I choose to break the cycle, I’m going to do it my way,” Oliver tells Talia. “Separating the two selves, hiding in the shadows, that was never the answer.” Again, this moment isn’t a revelation to Oliver or theÂ ArrowÂ audience; this is a statement we have heard before, just in a different way. But it’s a reassuring turn of events after last week’s episode made it seem like the superhero series was going down the brainwashing road yet again, and it acts as a sign of Oliver’s incredible emotional growth over the past few seasons that he doesn’t only recognize his claim as the truth but can assert it himself, especially when he’s at his most broken and isolated inside of Slabside.

Former foes become friends for Oliver inside of prison, as he and Talia work together to take down Dr. Parker and the corrupt prison guards (and the two of them fight beautifully together in one expertly choreographed and well-shot hallway sequence). But Oliver isn’t the only one teaming up with a frenemy in “The Demon.” Felicity continues to work alongside Black Siren to not only track down Diaz (who winds up in Moscow with the Silencer to capture Anatoly) but also to attempt to save Oliver in prison. The duo also recruit Dinah to help them, as they try to gather records that will incriminate Dr. Parker and prove that Slabside’s Level Two is an illegal experiment with frequently lethal results.

Ultimately, they receive the evidence they need to take down Parker, thanks to Talia who keeps her word to Oliver (and then delivers her own form of vigilante justice by cutting Parker down as he tries to leave the prison in his car), and while the end result (they believe that they can get Oliver released from prison) is exciting, it’s the small character moments woven within this storyline that make it one of the best parts of this episode. Somehow, some way, the dynamic between Felicity and Black Siren has become one of the best parts ofÂ ArrowÂ Season 7, as their back-and-forth jabs at each other provide “The Demon” with much of its humor, the type of humor that is sorely lacking from the repetitive, one-note Curtis plot in this episode. Additionally, there’s also a sweetness and compassion to their shared storyline, as Black Siren continues to make a genuine effort to redeem herself by not just fighting back against Diaz but also assisting Felicity and Dinah in their efforts to get Oliver released; she even asks Felicity to join her for a pizza, and it elicits of the brightest smiles we’ve seen from her so far this season. As I’ve mentioned before, unlike the failed attempts to redeem Black Siren in Season 6, these moments of kindness and comradery from her in Season 7 have worked extremely well, and that’s a credit to the writing and also to Katie Cassidy’s performance.

And Black Siren is not the only character who gets to show her vulnerable side in “The Demon,” as Felicity, who has been a hardened, determined force so far this season, reaches a breaking point of sorts in front of both Black Siren and Dinah. She opens up to the two of them, explaining how she was initially upset at Oliver’s decision to turn himself into Agent Watson but that she now blames herself for the possibility that he may be irrevocably changed by his experiences in Level Two. “I should have visited him more… I should have been able to prevent this… I thought that the worst thing that could happen was me losing my husband to prison– what if I lose him permanently?” Felicity says.

While I don’t agree with Felicity’s statement at all (Oliver’s desire to fight against Diaz and save his family are what led him down to Level Two, nothing else), the guilt that she is feeling makes sense on a character level. Despite their many differences, both she and Oliver have the unfortunate habit of carrying the weight of the world on their shoulders, and when something goes wrong, whether it’s small or big, they always end up blaming themselves. Given how much Felicity cares for Oliver and given how terrified she is of losing him, she is desperate for some type of reason to explain why this terrible situation is happening. Felicity blames herself because she believes that she is the only one who can fix it. She blames herself because she knows, as Oliver’s wife and William’s mother, she is responsible for her family. She blames herself, because, just like always, she is the person who is most dedicated to protecting Oliver Queen’s life. By blaming herself, Felicity controls the situation, and if she controls it, if she wields some type of power during this seemingly hopeless predicament, you can bet that she’ll find a way to save Oliver Queen. Because Oliver Queen might be Star City’s greatest hero, but Felicity Smoak is his.