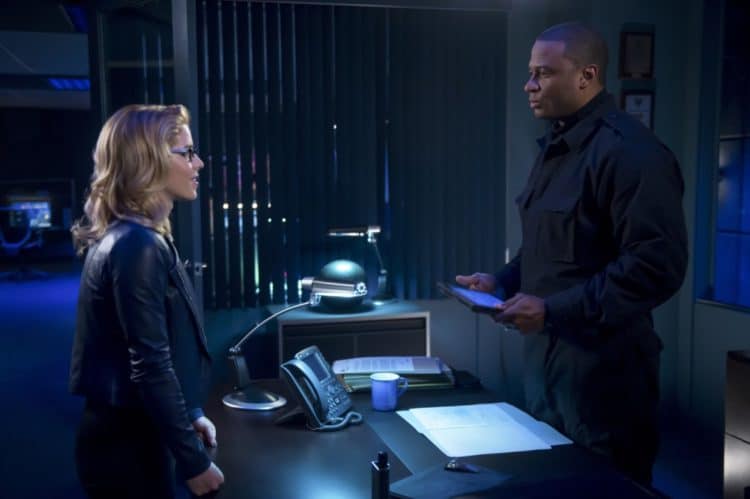 Felicity Smoak comes close to losing her true self in the final scene of this week’s Arrow. She’s been pushed to the edge by Diaz, pushed to the point of wanting to murder him because of everything he’s done to her and her family, and so she shows up in his holding room, carrying a pistol, telling him she’s prepared to shoot it and kill him in cold blood because he’s turned her into someone who is capable of that.

Felicity is usuallyÂ Arrow‘s beacon of light, always inspiring Oliver and other members of the team to be the best versions of themselves with her example of goodness and empathy, but this scene is her darkest moment. For the first time in a long time, Felicity Smoak needs something else, someone else to lean on, and it’s Black Siren delivering the news that, if she keeps Diaz alive, if Felicity doesn’t give into her worse impulses, Oliver will be released from prison. The simple thought of Oliver coming home, the knowledge that she will be reunited with her husband,Â is enough to convince Felicity to put the gun down, because even when she and Oliver are not in the same physical space, the emotional connection they possess is enough for them to be able to save each other. In that moment, Felicity understands that the darkness and hopelessness that’s overtaken her in recent weeks doesn’t have to be permanent, because Oliver Queen will soon be back to fill her life with light, inspiring her in a similar but different way than what she does for him. It’s a reflection of what I said in my review of last week’sÂ Arrow: Felicity Smoak is Oliver Queen’s hero, but he is also hers–the two of them are constantly saving each other, in big and small ways, every day. It’s why they’re partners. It’s why they’re spouses. It’s why they’re equals.

While the last scene of “Due Process” is crucial for Felicity’s character, it’s also incredibly important for the continuing evolution of Black Siren, who has never been better as a character than she is thisÂ week. TheÂ ArrowÂ writers have such a better grasp on who Black Siren is in Season 7, and throughout these first six episodes, but especially throughout “Due Process,” they develop her into a more complex, believable ally for Team Arrow, a person who, as she tells Oliver near the end of the hour, doesn’t want to be hisÂ or anyone else’s Laurel. She will not be confined to a one-label box, a stock hero or a stock villain, and her efforts to not only help Oliver get released from jail but to improve conditions at Slabside and, ultimately, help prevent Felicity from murdering Diaz are believable, earned actions that provide some validity to her claim that “everyone has good and bad inside of them.” IfÂ ArrowÂ wants Black Siren to stick around as an antihero ally for Team Arrow, a person who trades snarky barbs with Felicity but still invites her to go grab pizza, a person who struggles to to conform to the everyday, accepted practices of superheros, even as she tries to do good, I’m here for it. The series just needs to keep up this quality of writing for Katie Cassidy and the character.

Although Black Siren has seemed to find herself, John Diggle remains as lost as ever inÂ ArrowÂ Season 7. It’s as if the writers had to forget how to write an authentic version of Dig in exchange to create a more believable, empathetic Black Siren. The Diggle we’ve seen throughout these first six episodes this year is obnoxiously self-righteous and so unsupportive of both Felicity and Oliver that it has me questioning the six previous seasons of friendship between the three of them. During “Due Process,” Dig tries to claim that Felicity pushed him out earlier in the season, and it’s the most ridiculous argument I’ve ever heard him make. I mean, he’s making less sense than Season 3 Oliver Queen and his convoluted plans that put others in danger. The Diggle of the past six seasons ofÂ ArrowÂ would not act defensive towards Felicity; he would not try to shame her for doing whatever it takes to bring Oliver home. The John Diggle I know and love may have disagreed with Felicity’s methods, but he still would have had her back and supported her in whatever way he could. Maybe that support doesn’t come in the form of ARGUS resources. Maybe it comes from giving her tactical advice, or hell, even just calling her to check in and see how she’s doing. TheÂ ArrowÂ writers do remember that Felicity and Diggle’s friendship has been one of the cornerstones of the show since Season 1, right? Just like Oliver and Diggle’s friendship, a relationship that the writers also attempted to compromise last year with the whole “Dig wants to be Green Arrow” arc.

This pigheaded, sanctimonious, and hypocritical version of Diggle is not the same man who has stood by Oliver and Felicity for more than half a decade. While I am enjoying many parts of Season 7 so far, what is happening with Diggle is nothing short of character assassination, the same thoughtless, plot-before-character type of writing that plagued Rene, Dinah, and Curtis for so much of Season 6. There are still many in theÂ ArrowÂ fandom that won’t give any of those three characters a second chance (I, for one, still enjoy moments with Rene and Dinah and do my best to ignore last season–Curtis and his lames jokes and passive-aggressive comments can disappear forever, though). If theÂ ArrowÂ writers aren’t careful, this same type of mindset may soon apply to Diggle, and frankly, that’s inexcusable. John Diggle deserves better. He deserves more. Hopefully, “Due Process” is his ultimate low point, and the rest of Season 7 turns things around.

What did everyone else think about this week’s episode ofÂ Arrow? How have you been enjoying Black Siren’s character this season, and how would you fix John Diggle? Comment below and let me know.