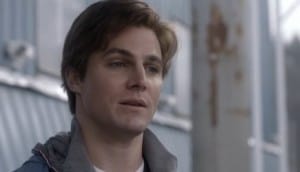 Throughout the first season of Arrow we’ve seen flashbacks to Oliver’s time on the island. In the pilot, we caught a few glimpses of him on the boat with his father before the Queen’s Gambit sunk. But this week’s episode is going to give us the first substantial flashbacks to a time before Ollie was marooned on that island.

In addition to seeing Robert alive and well, we’ll also see a pre-island Oliver, whose hair, I’m happy to say, has improved by leaps and bounds since he returned from his 5 year “vacation”. He shows up at the docks to tell his mother that he’d like to join is father on the sailing trip and Laurel stops by for a goodbye kiss. But what she doesn’t know is that Oliver is planning to meet Laurel’s sister for the trip…and Sarah is only moments away from turning the loving goodbye into a crazy confrontation.

Don’t miss a new episode ofÂ Arrow at 8:00 p.m. ET/PT on May 1 on The CW. You can also watch a preview for the episode here.