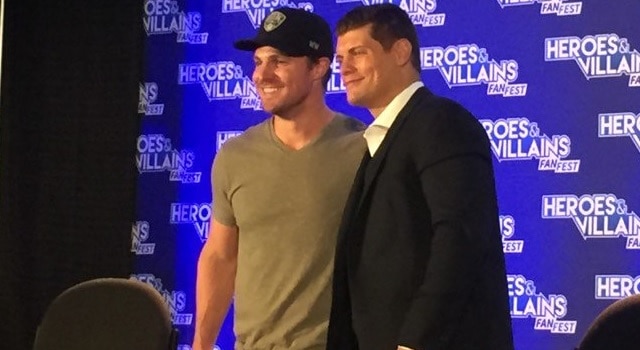 Arrow is introducing several new faces in Season 5 when the show comes back in October and today, the show made another recruitment , someone that WWE fans will recognize. During his panel at Heroes & Villains Fan Fest in New Jersey that is currently going on, Stephen Amell announced that Cody Rhodes will be guest starring this season. Amell said this about Rhodes’ upcoming gig on the series during the panel (quotes via Comicbook.com).

“Before we get going, we have an announcement. We have a new guest star on Arrow this year: Mr. Cody Rhodes. I’m so fired up for this guy; he and I haven’t really had much of a chance to talk about it but we’ve been friends for a little over a year now. I know that Cody has really wanted to get into the acting business. He went to LA, he read for a part, and his deal closed yesterday and the dude is going to be on Arrow and I’m so fired up.”

Rhodes is best known as Stardust from WWE and last year, he and Amell faced off at SummerSlam in a tag match. Recently Rhodes requested to get his release by the WWE which he got and now he will be reuniting with Amell on screen again, in the third episode, via tweets that came during the panel. While his role wasn’t revealed during the panel, Rhodes did hint that Oliver Queen will definitely be fighting his character. Season 5 is set to start production very soon in Vancouver, Canada, along with their fellow CW DCTV shows such as The Flash, Supergirl and Legends of Tomorrow.

Arrow Season 5 is set to premiere on Wednesday, October 5 at 8/7c on The CW. Who do you think/hope Rhodes is playing in episode 3 of Season 5? Let us know in the comments below.