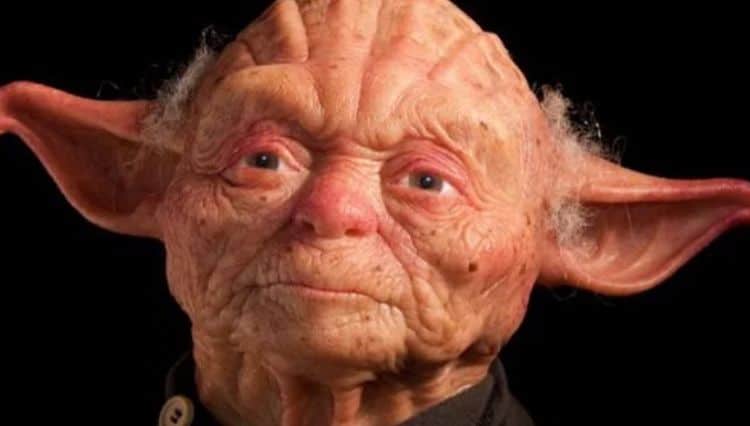 And that’s how nightmares are made folks. It’s fair to say that Kevin Burwick of MovieWeb might agree since giving Yoda human skin is something that a lot of fans didn’t really need to see or possibly want to see unless they were needing something to cure the hiccups or keep them awake at night. Just keep in mind though that what you see in front of you is bad enough without Yoda being made to open his mouth since if anyone can recall, Yoda doesn’t have human teeth, he has the sharp, pointed teeth of a predator that aren’t nightmarishly long or sharp, but are just scary enough to give this picture a little more oomph had Olly Smith, the originator of this piece, been inclined to go that far. Thankfully Olly kept some of the mystery but really this is something that might even push the limit for Star Wars since the creep factor is something that might belong, as Kevin says, in the Dark Crystal or perhaps somewhere even crazier like in a remake of Labyrinth. Yoda has certainly looked better in his 900 years and he’s definitely a lot more appealing with his regular green hue.

Out of all the characters that make up the entirety of Star Wars, Yoda is undoubtedly one of the favorites since from the beginning in The Empire Strikes Back he’s been seen as something of an eccentric character that turned out to be a very wise mystic. In the original trilogy no one saw him as a great warrior despite the fact that Luke made mention of it. We had to wait until the prequels to see Jedi Master Yoda really take on a challenge and get serious. It wasn’t even until near the end of Attack of the Clones that we saw him tangle with his former apprentice Count Dooku, who thought that he was the high and mighty master that could take Yoda down. It was actually pretty amusing to watch Yoda defeat one attack by Dooku after another as though he was schooling the man yet again, and when he summoned his lightsaber to his hand I can still remember at least half of the theater gasping in anticipation right before he took to the air and became a green blur that kept Dooku at bay and looked like nothing less than a small green buzzsaw as his lightsaber flashed here and there.

The battle with Darth Sidious was even better since it pitted two genuine masters against one another and still allowed Yoda to get one up on Palpatine at a crucial moment. Of course in the end he had to retreat since he realized the real battle wasn’t going to be won there, but it was pretty satisfying to see Yoda match Sidious’ power and remind the Sith lord that he wasn’t the top dog that he thought he was. That’s the greatness of this character however, he’s been able to do more with a gesture and a few words than many Jedi have done with an entire lifetime spent fighting. It’s true that Yoda has had centuries to gain the kind of wisdom he possesses, but he’s used it in the movies and the books to such an extent that people can’t help but think of him as both wise and cunning in a way that sets him apart from a lot of characters. There aren’t a lot of individuals in the Star Wars universe that have really been able to top Yoda and thinking of him coming back to the big screen during the High Republic era is a little humbling since he’ll still have been training Jedi as long as 400 years before the original trilogy, but he’ll be a much different character given that four centuries is a lot of time in which to gain wisdom and temperance. It’s not certain when this era of the Star Wars galaxy will be released or even when production will begin but the mere idea is kind of nice since it takes things back to a time when the Republic was very different and when the Jedi and the Sith were still very different. In fact it’s a wonder as to whether we’ll see Yoda in action again or if the coming movies will focus on someone else entirely.

Darth Revan is a big name that’s been kicked around a bit but the thing is that Revan’s time was long before the time period that’s being discussed according to the timeline. Of course that hasn’t really stopped Disney from doing what they want, but given what’s already been stated in the movies it would behoove the Mouse House to keep Revan and others thousands of years in the past where they originated in the story. As for Yoda, there’s plenty of room for him in the coming movies, and there’s no doubt he’ll be anticipated. Matt Patches and Petrana Radulovic of Polygon have more to say on this matter.