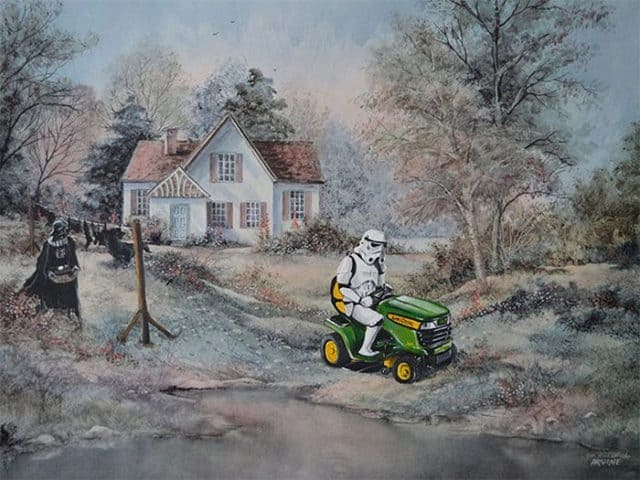 You know those old thrift store paintings you see every time you go to a Goodwill or similar store right? An artist decided to take a bunch of them and spruce them up a bit with Star Wars characters to see how it would work. Honestly they look a little more interesting now, though some of them obviously had a lot of heart put into them. It’s kind of sad really since most of the times pictures like these sit on a shelf and go unnoticed for a long, long time before a kind soul comes along and thinks that they’d be perfect for a room in their home. With this makeover though I’m betting a lot more people might find them even more endearing. 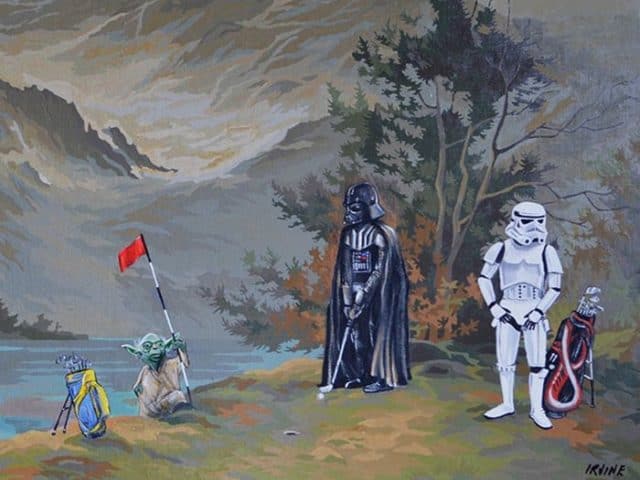 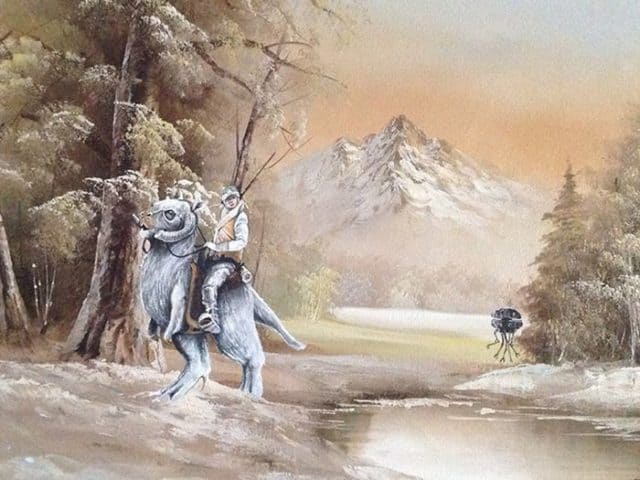 I don’t know if he’d have to worry about Wampa’s in this terrain, it’d be more likely that a grizzly might come looking for a snack. 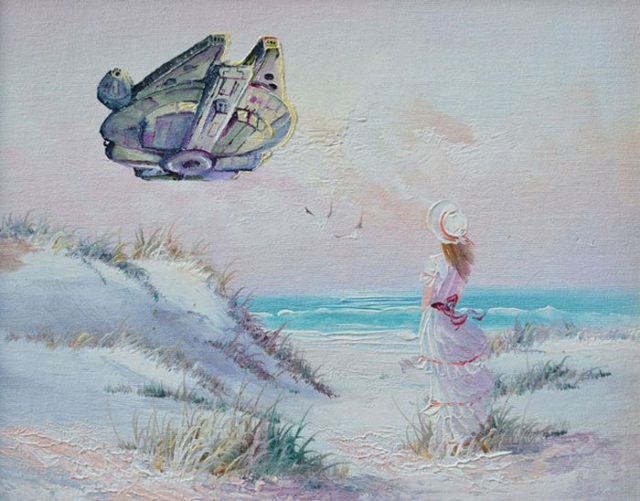 That might be something you wouldn’t see every day. 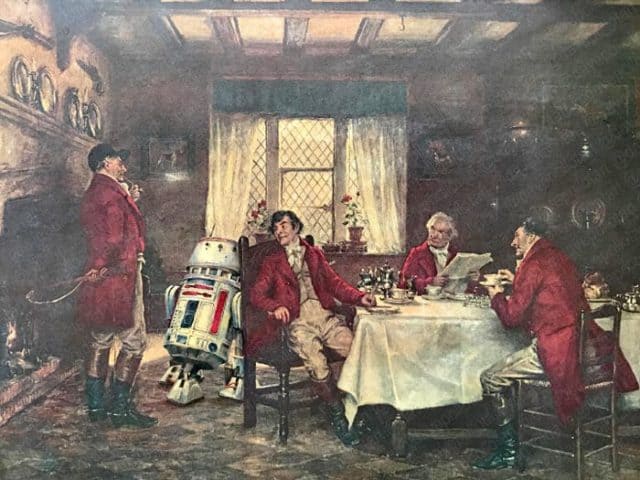 Imagine how many English Lord would have loved to have a trusty droid around for their convenience? Of course back then it might have been construed as witchcraft. 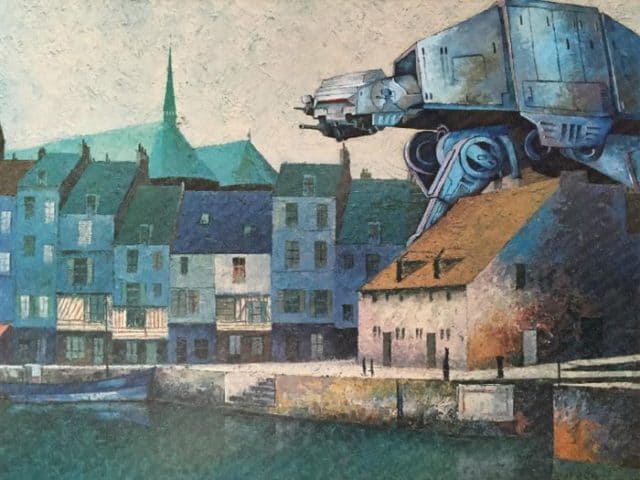 Just out on patrol, nothing to see here. Stay in your homes folks. I’d hate to see what just one of these would do if it brushed up against a building. 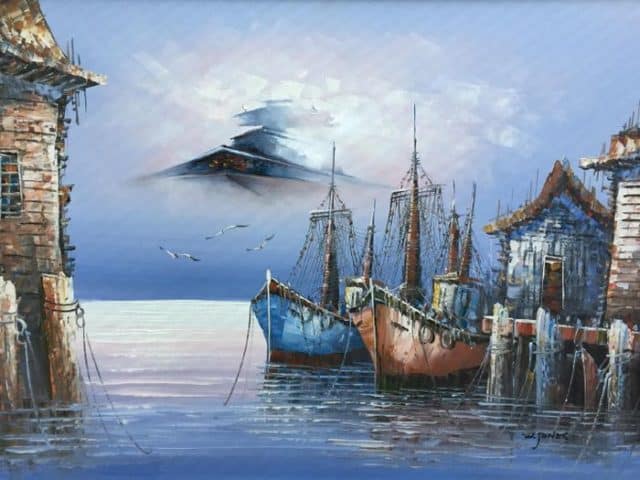 It’s like the Empire sent a Star Destroyer back in time. Or it’s like a vision out of Independence Day. 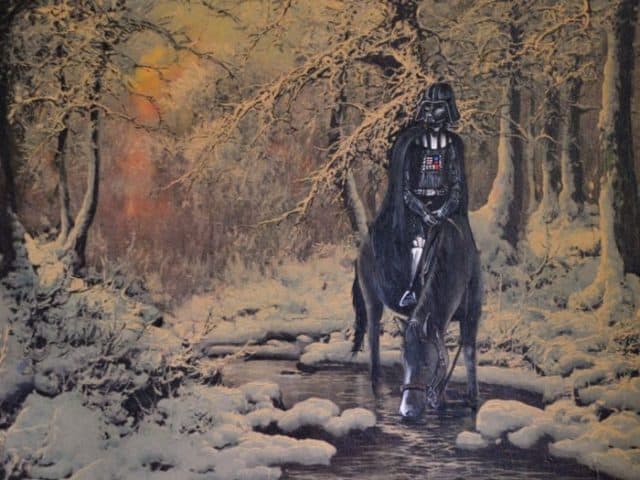 That horse would have to have nerves of steel to carry a Dark lord of the Sith, or just not care who was on its back so long as it was being fed. 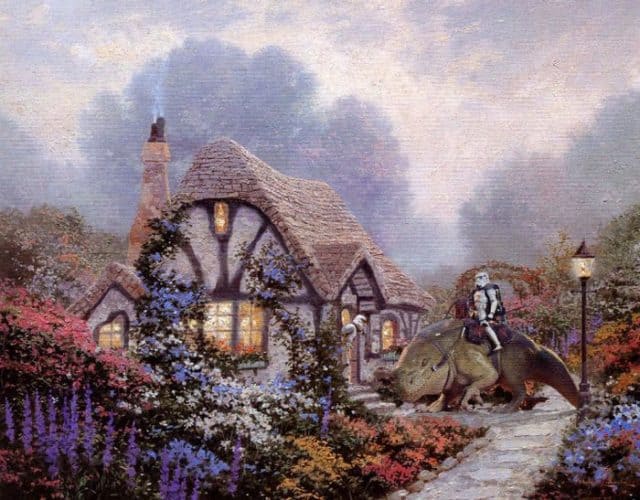 Another version of a carpool maybe? 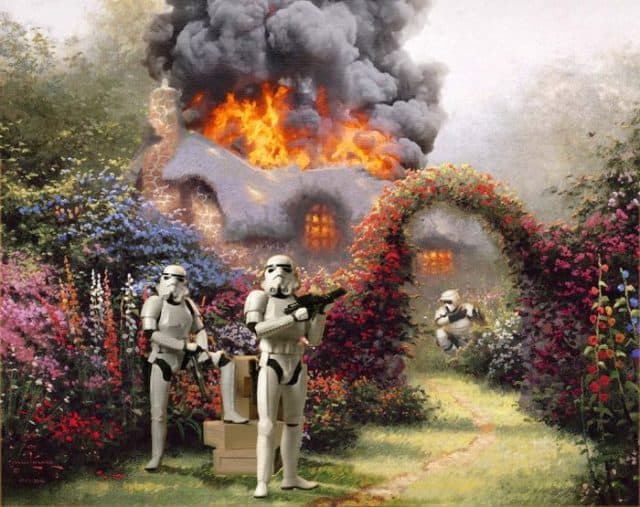 Join the Empire! Blow stuff up and burn down peoples homes for no reason! 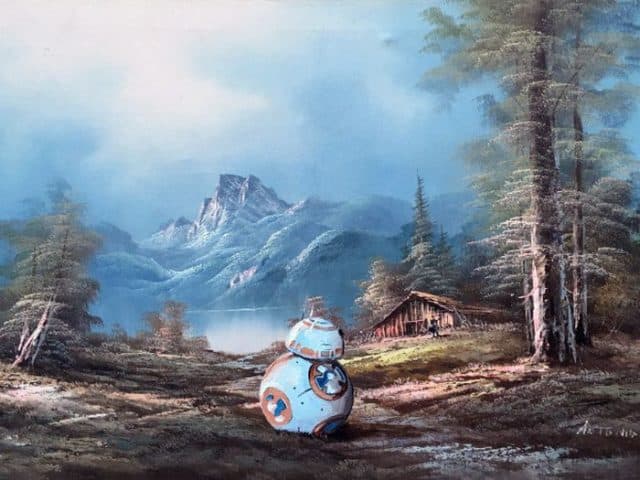 I wonder what kind of traction BB-8 can get in mud. 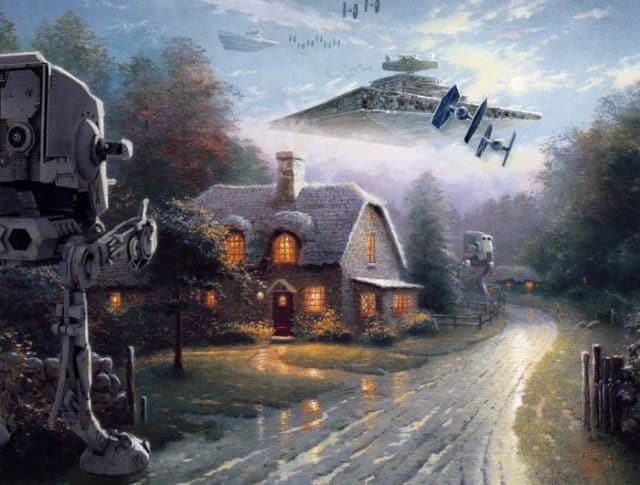 When the Emperor comes for dinner. 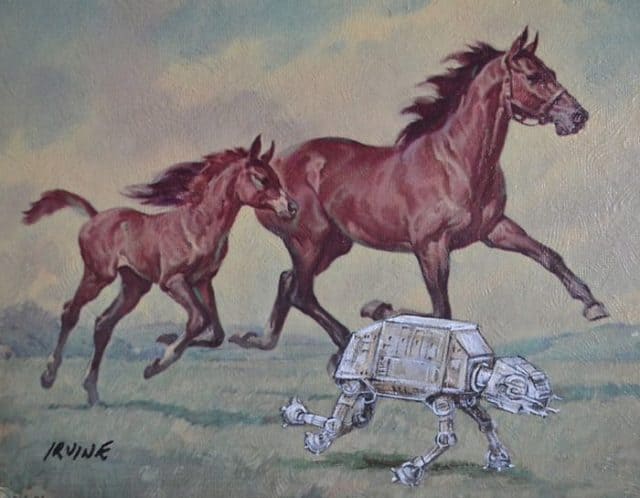 So AT-AT’s have to learn to run before they can walk? 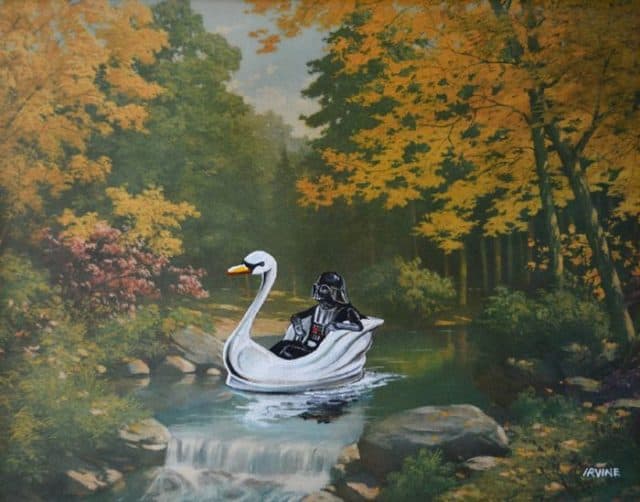 The softer side of the Dark side…..oy vey. 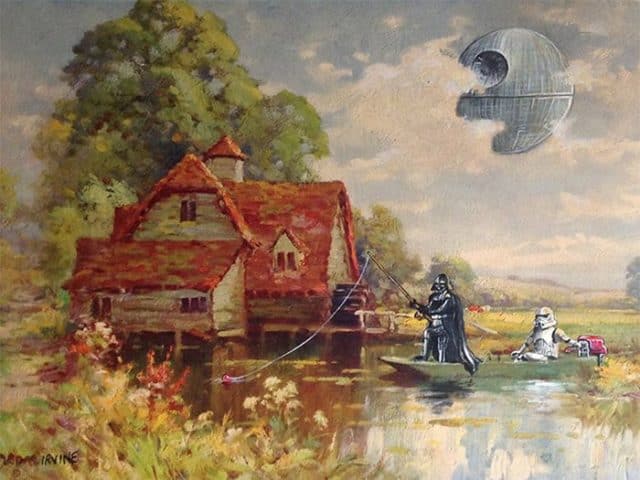 Taking a break from terrorizing the galaxy and just doing some nice, quiet fishing out on the lake. 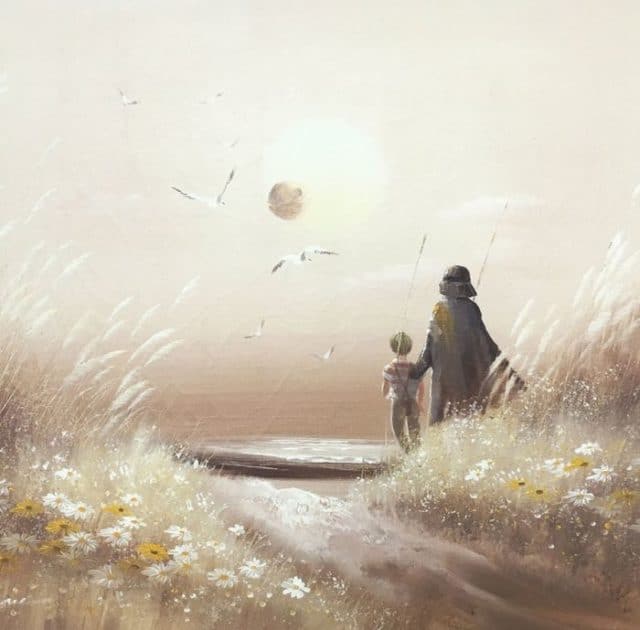 No no son, that’s not the moon. That’s the big, planet-sized space station that’s going to turn this world to rubble soon. 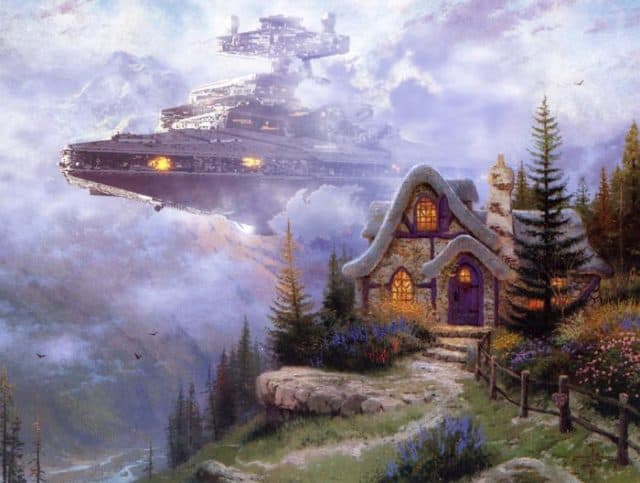 I swear every picture with a Star Destroyer in it just looks so ominous, like it’s some great, mechanical beast forcing itself out of the mist just ready to blast at anything in sight. Well, wait, that sounds about right really. 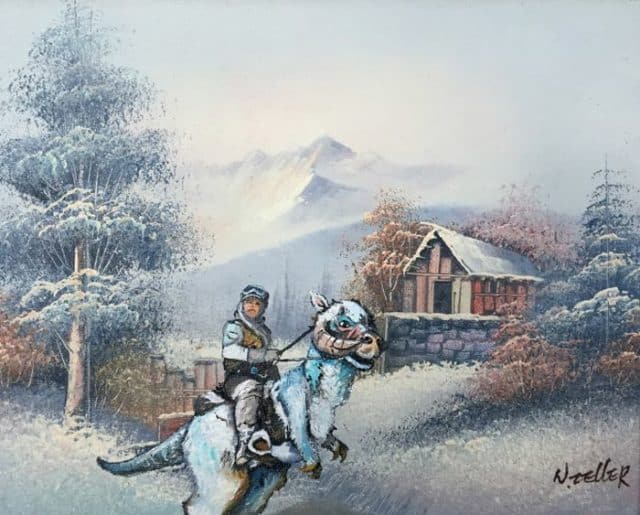 This artist certainly has a set number of characters and objects that they like to draw. Tauntauns seem like they’d be kind of difficult, but the artist seems to have little problem doing it.

These pictures turned out pretty cool really. It’s obvious that the artist is a fan of Star Wars and might lean towards the Empire.