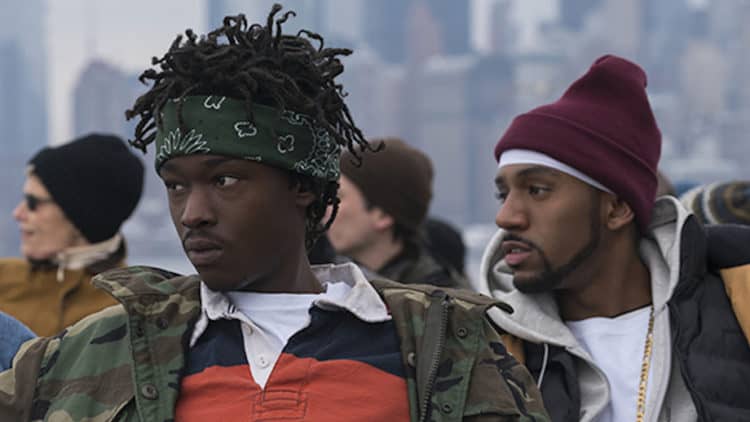 Ashton Sanders has a magical quality about him that makes it almost impossible to look away every time he’s on the screen. He got his first big break in 2016 when he was cast in the hit movie Moonlight, and it was clear that he had the potential to become a star. A few years later, he got another huge opportunity when he earned the role of Bobby Diggs AKA RZA in the Hulu series Wu-Tang: An American Saga. His portrayal of RZA has gotten him lots of attention and it’s helping to further cement his place in the industry. If Ashton keeps going the way he is now, he might become one of the most respected actors of his generation. Keep reading to learn 10 things you didn’t know about Ashton Sanders.

Ashton is doing such a good job of playing a New Yorker in Wu-Tang: An American Saga that some people may have a hard time believing that he isn’t really from there. Ashton was actually born and raised in the Los Angeles area and he’s very proud of his West Coast roots.

2. Wu-Tang: An American Saga Is Just His Second TV Credit

Ashton is a natural in front of the camera but he doesn’t have as much experience as people may assume. Although he has had several film roles, the Wu-Tang series is only his second TV role. Hopefully, though, it won’t be his last. That said, it’s unclear if he plans to focus on TV, film, or both.

3. He Studied At DePaul

By the time Ashton was in high school, he knew that acting was something he wanted to do on a serious level. After graduating, he enrolled at DePaul University where he planned to earn a bachelor’s of fine arts in theater. However, he decided to leave school early so that he could really focus on his career.

On top of his work in TV and film, Ashton has also gotten a glimpse of what it’s like to be in the music industry. Ashton was in the video for Chloe X Halle’s song “The Kids Are Alright“. The video currently has more than 3.7 million views on YouTube. He was also in the video for “I Dare You” by The XX.

As a creative person, Asthon understands the importance of self-expression. However, acting isn’t the only way he likes to express himself. While talking to Interview Magazine, Ashton said, “Style, or the way I dress, has always been an extension of who I am, whether it’s wearing the same jeans everyday or wearing a kilt. I’ve always felt comfortable with how I dress.”

6. He Has A Strong Support System

Sometimes when people choose a non-traditional career path over something more stable, it can cause a rift with the people closest to them. Luckily for Ashton, the people who love him have always been supportive of his aspirations of becoming an actor. Having a strong support system has definitely helped make his journey easier.

7. He’s Mindful Of The Kinds Of Roles He Does

Since roles can be hard to come by, there are lots of actors who will take anything that is offered to them. That isn’t Ashton’s plan. He puts a lot of thought into the opportunities he takes advantage of. At the same time, though, he understands that as a Black man he may have fewer options than white actors.

8. He Likes To Stay Low Key

Ashton is thankful for all of the good things that have happened in his career. At the same time, however, he isn’t someone who is obsessed with constantly being in the spotlight. From what we can see, he enjoys his privacy and prefers to keep all of the attention on his work.

9. He Got Really Wrapped Up In His Role In Moonlight

Getting into character can be such a consuming experience that some actors have a difficult time drawing the line between themselves and the person they are playing. This is something Asthon dealt with while filming Moonlight. He told Issue Magazine, ” I was kind of lost in playing Chiron, so it’s crazy to be outside of the character now. Every time I see the film, I have to watch it for what it is, like, “Yo, that’s not me.” It’s surreal.”

10. He Would Love To Play A Vampire

Ashton has already gotten the chance to have some incredible experience, but there are still some things he’d like to do before it’s all said and done. One of those things is play a vampire if they were to ever do a remake of the movie Blade. Hopefully, he’s able to see that dream come true one day.