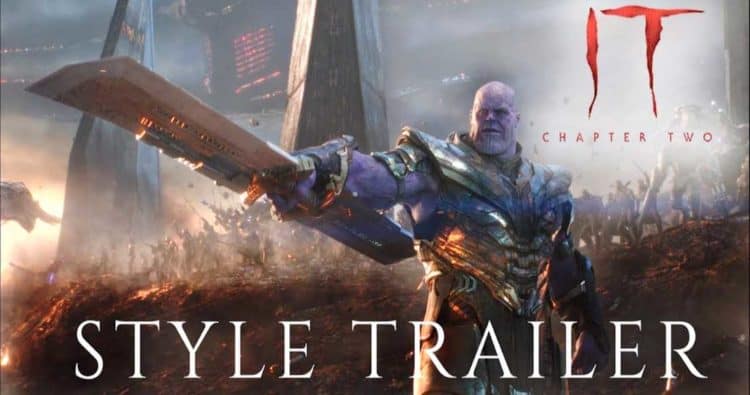 Even styling Avengers: Endgame as a horror in the likeness of IT doesn’t seem to make it any less of the action epic that it was since the strength of character in the movie is a little too powerful for fear of that magnitude to take hold. Think about it this way, Pennywise feeds off of fear, he makes it impossible for those that he targets to feel anything but afraid, desperate, and so hopeless that they become an easy meal that he can devour without pause. Thanos on the other hand might make people feel afraid and hopeless, but he also inspires anger due to his arrogance and unrelenting determination that his way is the right way. Plus, he’s going up against superheroes that have already tasted defeat and gone through their own world-ending trauma and felt the need to dive back into the fray even if it’s for the last time. There’s fear there, but it’s only a small thread in the surge of righteous anger and absolute certainty of their cause, which is why the IT-themed music is impressive in a way but not bound to create the same effect.

With IT: Chapter 2 coming to theaters soon though it’s understandable why so many mashups and crossovers are being attempted considering that the music for the trailer is pretty creepy and does work on more than one level. But calling Endgame a horror isn’t entirely inaccurate since if you can imagine living through a tragedy such as The Snap that happened in Infinity War then it might be absolutely horrifying to think of what might await the people that disappeared once they’re returned. A few good points have been made concerning what might have happened to some of them when they did pop back into existence, since if you think about it Thanos wasn’t likely to be focusing upon every sentient being in the universe when he erased half of them. What were some of those folks doing when they simply disappeared into ash? Some might have been in the middle of performing an act of some sort that might have caused them serious bodily injury if they snapped back into the same place once Bruce reversed the effect. Say a person was on a plane or in the middle of the ocean sailing or anything that might be similar. Would they appear in the same place? Or would movie magic make it okay since they would be whisked away to some safe spot that allowed them to enjoy being alive again? The odds of the latter happening are pretty good since Disney doesn’t likely want you obsessing about it too much.

But the continued horror of it all would be that for five years those that lost someone would have to deal with it in their own way, and there’s a good chance that the suicide rate would take a serious jump simply because the phenomenon couldn’t be easily explained. Even if it was, how many people would blame the Avengers for ‘letting’ it happen? As a lot of us might guess, there isn’t a lot of room rational thought when someone simply disappears and it’s discovered that something could have been done about it. The Avengers might become Public Enemy #1 if that was the case. Then imagine the people snapping back into existence only to find that their loved ones had committed suicide or moved on without them. Imagine the loss and the utter confusion they would feel when it came time to realize that even if they felt as only moments had passed, it had been five years since they’d been able to walk around and go about their lives. The horror in this is quite cerebral as it would take a massive amount of adjustment and an even greater effort to reconcile with all that had happened. The happy ending that the MCU gives is something of a deus ex machina, something that doesn’t need explanation but just is because Disney willed it to be so.

As far as Thanos and his army are concerned there’s plenty of terror there, but not quite the level of horror that people might want to claim since once again, he’s standing against seasoned heroes that have seen some truly horrible things in their lives and stood against them no matter what. Each hero on the field was trained and tested when it came to combat and were more than well-versed in how to handle themselves on the battlefield. The horror that might be inspired by the IT-themed music is more akin to the winding feeling that comes right before a major battle, when you simply know something epic is about to go down and understand that the tension has to be built to a certain level before being unleashed. It’s terrifying in a way, but not truly horrifying.