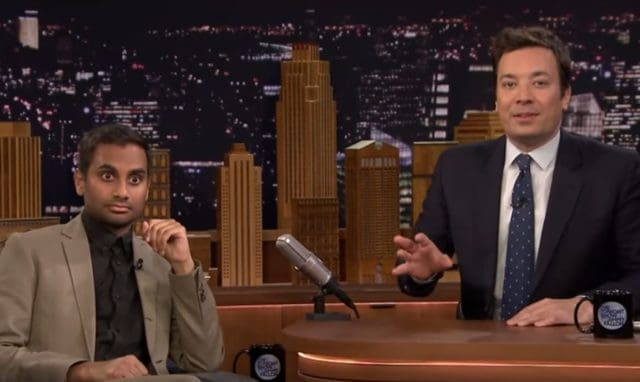 There’s a segment on The Tonight Show with Jimmy Fallon called “Dramatic Yelp Reviews” and if you haven’t seen it then Aziz Ansari is a fantastic guest to start with.Â Â  I’m not sure it compares to Jimmy Kimmel’s “celebrities reading mean tweets” but I have to admit that it’s pretty solid.Â Â  P.S. here’s yet another reason why I love The Tonight Show.Â  It’s just so much more original than people give it credit for.Â Â  The Late Show is just straight up politics and interviewing.Â  Colbert definitely gets into the funny skits and segments once in a while but he’s leap years behind Fallon when it comes to random stuff that’s funny and entertaining.

So let’s get back to Aziz Ansari who was a guest on last night’s show.Â  Ansari almost feels like he’s been off the radar doesn’t he?Â  I think it’s because Parks and Recreation isn’t on the air anymore.Â  However, Ansari is as busy as he’s ever been and you don’t have to look very far to see what he’s up to these days.Â Â  In addition to doing stand up, hosting SNL, having a hit series, he’s also working on some films.