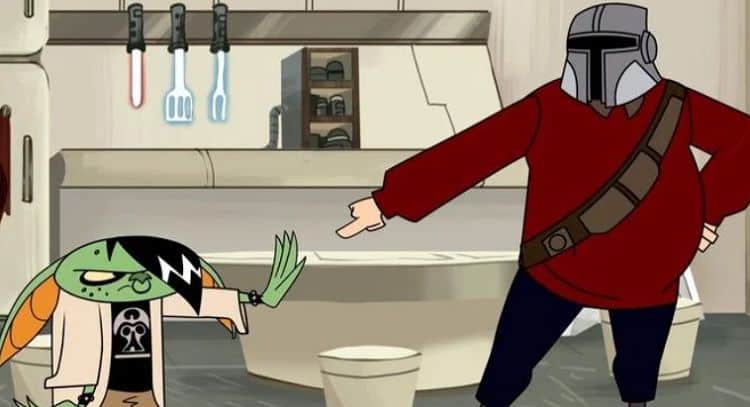 Kevin Burwick of MovieWeb manages to give us the rundown of this particular parody as we can see what might have become of Din Djarin, aka Mando, and Baby Yoda, now Teen Yoda. As much as the little guy has been compared to Groot from Guardians of the Galaxy there are a few notable differences even though the creator of this parody had to have taken some kind of inspiration from Teen Groot at some point. Thankfully though Teen Groot didn’t have the Force to work with, as an angst-ridden and angry Teen Yoda would likely be a handful to deal with considering the fact that with a gesture he could do almost anything he wanted by dint of being able to disarm or dismantle those that opposed him. Teen Groot at least has some kind of a heart as we did see him help out Thor in Infinity War despite his continual attitude the rest of the time, but Teen Yoda just appears to be all anger, but won’t take it out on Din at least since perhaps there’s still a soft spot there that won’t allow the little guy to vent his anger fully on the only father figure he’s ever known. Or maybe the animator just didn’t want to go that dark, it’s hard to know really. In any case he did choke out a neighbor, so it’s fair to say that he gives Din a lot of contempt and attitude but won’t go as far with him as he does with others.

If anyone was noticing there is a part in the clip that kind of hearkens back to Stranger Things when Eleven used her powers to slam the door in Hopper’s face, but then again that could have just been seen as a natural reaction to someone that can use telekinesis and has a serious attitude problem, so it could be my overactive imagination drawing a comparison between the two. Jamie Jirak of Comic Book has something to say about the matter as well. Still, on can’t help but think that there is a connection of sorts that’s kind of funny since any show or movie with teenage characters in it would appear prone this kind of behavior at some point given that those stuck in this time of their life with hormones raging and their identity changing every so often knows what it feels like to be uncertain about one thing and then dead certain about something else in the next instant. Come on, a lot of us should be able to remember back when we were teenagers. Some of us thought we knew everything and were irritated by anyone treating us like children, while others thought they knew it all and somehow managed to get along. Then there were those that just wanted to get along and obviously didn’t know it all.

A Teen Yoda though does sound like a dangerous proposition since trying to get such an individual to do anything or stop doing anything doesn’t sound like it would be particularly easy. Mira Jacobs of CBR has something else to add to this topic. What’s to stop such a teenager from just picking up their parent with the Force and dropping them to show them who’s in charge? That’s why the familial bond between Din and Teen Yoda is so important since it would indicate that while this phase is definitely less than pleasant there’s still a line that the green teen won’t cross, at least until he figures out just how powerful he is and how far he can really go with his Force abilities. At that point it might be wise to start thinking of ways to dampen Teen Yoda’s Force abilities just a bit since it could save a lot of headaches down the road. There are way to counter Force users after all since they are living, breathing beings that need certain things to survive, though it’d be interesting to see if Din would ever take that step and try to dampen Teen Yoda’s abilities or if he would just play the game and do what he could to keep the kid on the straight and narrow. After all it’s kind of obvious that Teen Yoda hasn’t gone full dark side yet, but choking out the neighbor is a good indication that he might be able to cross that line and not look back. Plus, the idea of the storm troopers showing up at the end of the clips makes it clear that Teen Yoda wouldn’t have much of a chance to be peaceful since what remains of the Empire would still be trying to acquire him, and the fact that Din put on a few pounds and might not be quite as quick would be an issue.

All in all, dealing with a Teen Yoda might be something of an ordeal since dealing with a Baby Yoda was almost enough to get Din killed on more than one occasion.