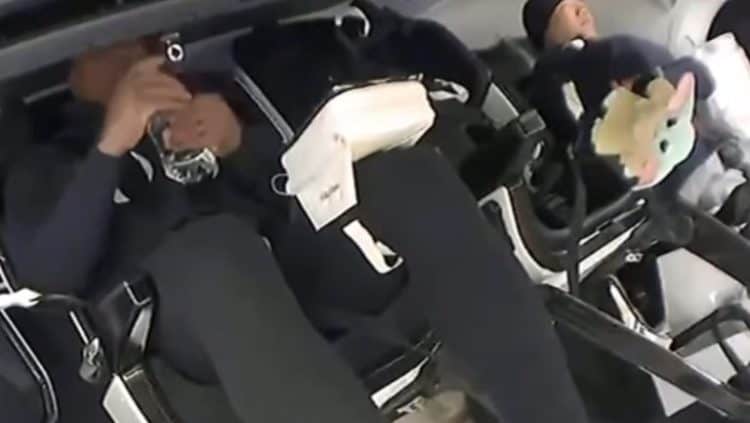 Baby Yoda is making the rounds it would appear since he’s been seen helping firefighters and now he’s been seen with the SpaceX crew just hanging out and chilling. One could say at this point that the little guy has been doing his part to represent the Star Wars brand no matter where he goes and provide a bit of inspiration and whimsy along with it. That’s essentially why the crew chose Baby Yoda as their go-to for this mission since it’s hard not to smile when this little guy is around since so many people happen to think that he’s undeniably cute and is capable of lifting the spirits of just about anyone. The SpaceX program is something that many people have been talking about for a while and there are plenty of reasons for it, but one of the most important is that the ability to launch people into space on a commercial craft is a big step forward for space travel and it’s become a goal to bring the human race into space once again for a number of reasons that a lot of people are willing to talk about. Space travel has been a big part of human imagination and reality for a while now, but the limitations that have been placed on it have been due to a number of different reasons that are hard to get around. After all, traveling into space isn’t quite as easy as traveling across a continent, since it’s fair to say that if it was, people would have done it in great numbers by now and we’d be discussing the weather on Mars or would be able to Google how long it takes to get to Jupiter from one city or another. Obviously I’m joking, but the point is that if space travel was easy it wouldn’t require the decades that have gone into reaching the limits of our atmosphere and beyond.

The SpaceX program is, in a sense, the attempt of humanity to get back into space and find a way to make it marketable for further exploration and possibly go far beyond that. The success of the program is something that’s going to need further discussion at this point since getting people into space has so far proven to be kind of difficult due to the expenses that are needed, and it’s fair to say that even someone like Elon Musk doesn’t have the kind of money that it’s going to take to normalize space travel. Plus, when it comes to space, humanity’s imagination is still light years beyond the reality that a lot of people are looking to make possible. At this time, trying to normalize space travel is something that might require another century or two at the very least unless a few new breakthroughs are found that can accelerate the process in a manner that will allow people to leave their world as easily as they leave a state or country.

Baby Yoda’s part in this is to be an inspiration for the most part since the small green character is one of the many pop culture icons that people have been using for the past year to help themselves get through tough or momentous times since he is pretty cute and for one reason or another it is kind of hard to think that anyone could possibly stay negative around him. There is a reason why The Mandalorian is so popular, and he’s one of the top reasons since his appearance has helped the show immensely. The idea that he might one day have to go away is something that a lot of people aren’t ready for but some have actually realized will happen sooner or later. But if there’s a link to be drawn between Baby Yoda and people heading into space, and there are probably quite a few that people could think of, it’s best to let those with the wit take care of this and laugh at whatever they dream up, or nod in resolute understanding. But the idea of sending people into space to see how far humanity’s influence can be spread is something that is easily going to be debated since the subject has been brought up more than once in the past couple of decades, and ever since the moon landing people have no doubt been wondering just whether or not we can keep pushing forward and eventually send people into the deeper reaches of space to see what’s really there.

It would be kind of a kick to one day learn that humans have found other life in the universe and that our culture might be looked upon as an oddity by another species. We might not be around to see it, but the thought is intriguing.