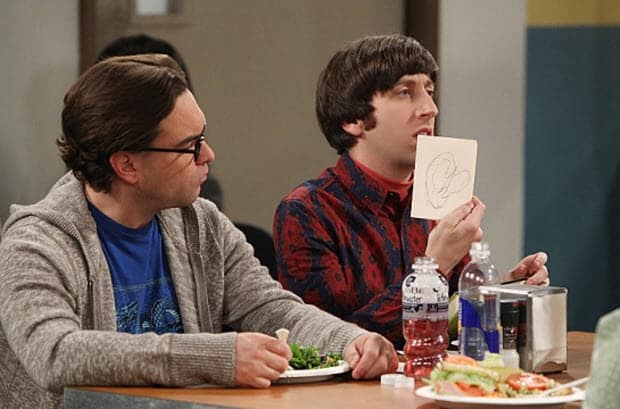 As in the past, Sheldon’s enthusiasm does not equal to that of his friends at the exciting news of one of the biggest scientific breakthroughs of their lifetime this week on The Big Bang Theory. Turns out, Sheldon is jealous because he is no closer in his string theory work then when he started. To add salt to the wound, Kripke sets Sheldon up by getting him excited that some breaking news in string theory happened also. It didn’t, of course, and Kripke laughs at the thought that Sheldon will believe anything. There have been some good scenes throughout the seasons that involve Kripke, but I am growing a little tired of the speech impediment humor and I would not be saddened if they were to write is character off completely.

I am always happy to see when there is a scene with just Penny and Sheldon. These interactions always remind me of times with my now 10 year old-niece, but where I purposely say things to get under her skin. Sheldon, with his Spock-like emotions, doesn’t quite realize that the things he says can be rude or hurtful, even though there is a lot of truth to what he says. Penny I think really hit it on the head when she said that she understood what Sheldon was saying, maybe not all the “jibber jabber” words that Sheldon said, but could get a sense of what he was feeling and then she explained it in the genre that fits her better…relationships, as her lactose intolerant, asthma attacked boyfriend walks into the room.

We are reminded how far Raj has come, from not being able to talk to women at all to now dating two different women at once. We then are reminded that Raj still has a lot to learn on relationships when it is revealed that what he says to Lucy was definitely not what should ever be said to any woman.

Sheldon is taking his “breakup” from string theory very hard. This is something he has been working on for most of his life. To help him with ending this “relationship” he has started reading Cosmopolitan for tips. Sheldon has always been one to use any and all resources for his studies. As I watched this episode, I thought that Sheldon rarely gives up on anything and I guessed by the end of the episode he would have an epiphany and want his lady love, string theory, back again.

Raj and Howard, along with Bernadette have planned a double date to include Raj single girlfriend now, Emily. I am feeling that this may not end well. Raj has the same feeling because he is worried that Howard will crack jokes at Raj’s expense.

My feelings about the double date were proven to be right, but not for the reasons I thought. It looks like Howard definitely knows Emily from the past but Emily only thinks that Howard looks familiar. Can Howard keep it that way throughout the entire dinner date? My bet is no.

Sheldon’s one liners come through again. His friends are trying to suggest other scientific areas that he could start working on. His funniest come back was when Amy suggested his new studies be the calculation of nuclear matrix elements and his response was, “Oh please, if I wanted to take up a fad I would get a tramp stamp.” I had to rewind because I was still laughing and missed what the next suggestion was!

I would say that our collective hunches were correct in thinking that Emily would finally put things together and remember how she knows Howard, as he begs her not to share the story but she continues to do so. He interrupts her so that he can finish the story and maybe feel less embarrassed. Howard and Emily were set up on a blind date and as Howard reached her apartment it is assumed he was hit with a little IBS and asked to use her restroom. Things did not go very well for Howard and in a panic decided to climb out of her bathroom window. So now Howard has gone from his astronaut nickname of Fruit Loops to his new nickname of Clogzilla! Some bathroom jokes ensue and Howard is not amused as I know I wouldn’t be either. How humiliating!

After Sheldon took Penny’s idea of letting his next work find him, they all celebrated and drank wine. The funniest scene to me was after Amy walked a drunken Sheldon to his bedroom. We find Sheldon waking up the next morning horrified with what he saw in bed next to him. I of course first thought it was Amy. It is revealed that an open geology text book is lying on his outstretched arm. Sheldon had explained to Penny that geology was the Kardashian’s of science. Sheldon then has to take his walk of shame. He also later finds out that he had drunk dialed and left some messages on Stephen Hawking’s answering machine, where he eludes to geology being fun, does an impersonation of Stephen and reveals that he kisses girls now.

I have yet to be disappointed in a TBBT episode and that still holds true after this episode. I am looking forward to writing more reviews/recaps of TBBT and with the show getting signed on for another 3 years, I should have a lot to write about.

“Hey, I’ve got a good job, I could buy salmon, you don’t know” — Leonard to Penny