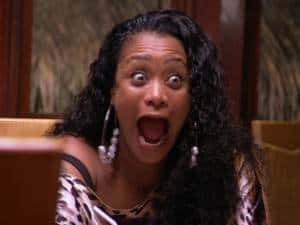 Before I get into the torrential downpour of horribleness that was the season finale of Basketball Wives, let me take a hot second to give Royce some love. Aside from the incident with her father recently, Royce has been my favorite pretty much all season, focusing heavily on her career and keeping her nose out of the drama that plagued her first three years on the show. And when she did get dragged into something with the other girls, she made clear, accurate points and held her own without resorting to typical Basketball Wives-ian tomfoolery, which is why I loved her so much tonight. Rather than bow down and kissing Tami’s feet like most of the other members of this cast do, Royce checked her Tahiti behavior like a real friend would do; it’s become clear that certain Basketball Wives associate friendship with being a yes man and unquestioned allegiance and honestly, that’s not real, tangible friendship. That’s a mob mentality, a group-think, a brainwashing that belongs moreso in a George Orwell novel than a trashy VH1 reality show.

Tami’s worn her “realness” on her sleeve from day one, but the second that somebody steps out of line and calls her out over how ignorant she acts, she gets pissed off and shuts down. Royce never came at her poorly, never raised her voice, never hit back with an insult at Tami for the Kesha quips and I respect that immensely. That’s the personal growth that Basketball Wives needs and the kind that it is terrified of broadcasting, so it was nice to see somebody acting like a voice of reason, unafraid of the wrath of “the circle”. Every girl gets so intimidated by them, but Royce has never backed down, which is the main reason I think she’s such an “outsider” on the show. It’s also the main reason I enjoy and appreciate her presence on the show, a tiny bit of balance in perspective.

But as much as I liked Royce standing up to Tami, the rest of the episode couldn’t keep me from becoming extremely irritated, particularly when it came to the final 10-15 minutes. Was I the only one insulted by them addressing-but-not-really-addressing the controversy? Because the (obviously recent) footage was beyond inane, to the point that my eyes nearly popped out from rolling so hard. If the show had wanted to explicitly include the public response, I think it could have worked in small doses; but having Shaunie have some type of “crisis of faith” and go to a pastor? Come. the hell. on. Don’t get on my television and act like you’ve reached this conclusion on your own, that you’ve been harboring all types of guilt and negative feelings about your association with the show. If she’s that torn up inside, why are there plans for a Basketball Wives movie? Granted, there have been rumblings that this’ll be “different” from the TV show, but it’s still a part of that brand and when people hear the phrase “basketball wife”, they associate it with the show. You’re continuing to make money on this thing that you’re distancing yourself from and to me, it feels like playing both sides of the fence. If you have no problem with the violence and the shade, that’s fine – just don’t come on television acting like Mary Martyr in the process. Don’t put yourself above these women when you’re A) joining in (e.g. the shade about Jennifer’s lip gloss line having 4 shades), B) laughing at their insults, and C) cashing the checks that their behavior is bringing home to you.

If there’s an actual moral conflict, why doesn’t she give the money she made this season to charity? Or create an anti-bullying PSA? Or, for that matter, actively denouncing the behavior that she permits on her television show?

It’s not like Shaunie was alone in killing my soul, though. Evelyn is still ginormously pressed over Jennifer’s radio interview from last season, which she had supposedly forgiven her for. I’m all for the idea that not everybody has to be best friends and friendships change shape constantly, but this is immaturity at its finest. For one, Evelyn comes at Jennifer and slut shames her for basically the first half of the episode, which is petty, childish, and hypocritical. Didn’t you nearly kill Kenya for insinuating that you were loose? But it’s totally cool to talk about a guy that Jennifer banged in Vegas why? Because you don’t like her talking about your relationship when, spoiler alert, you have a reality show coming in the fall strictly about your relationship? You can’t exploit your relationship for your own personal gain and not expect people to comment on it, good or bad. The world does not work like that, boo boo. You can’t put that much of your private life into the public sphere and not get instant, visceral reaction to it. Evelyn can’t have the good that comes from having a public relationship without having the bad that comes along with it, so I’m not here for any of her drama queen crying spells or ridiculous logic when it comes to Jennifer’s mildly negative comments 500 years ago.

If you’re going to accept an apology, accept it and move the hell on. Accepting an apology and still holding this intense of a grudge is just stupid and proof that this bum needs to get herself to some type of therapeutic institution pronto.

Thoughts, Quotes, & Observations:
-Meeka responded to Wendy Williams’ dismissal of the former Basketball Wife’s bullying charges.
-Evelyn threw shade at Star Jones because of course she did. The two have since reconciled.
-Royce, Tami, and I blogged about the last episode, should you want to relive the foolishness.
-Life coach S. Tia Brown on how to identify adult bullies.
-Kenya’s estranged husband Charlie wants her to support him financially.
-Tami’s back on Twitter, if you’d like to follow that ol’ stunt queen.
-Eric D. Graham of blackathlete.net wrote a strongly-worded piece on the image that Basketball Wives gives black women.
-I was living for Jennifer saying that Evelyn could have talked to her in private if she really wanted to. Thank goodness somebody said it.
-Did anybody else catch the kind-of goodbyes that Tami and Jennifer got in? I think we’ll see more cast turnover going into season five.
-Evelyn’s black dress with all the cut outs was incredibly tacky. Hooker on a budget.
-I’m not going to be covering part one of the reunion, unless something unusual happens, but expect a reunion recap/season retrospective after part two airs. Keep it 100 in my absence, y’all.
-Next week on Basketball Wives: Evelyn cries and takes a lie detector test at the reunion. Meanwhile, Shaunie’s still self-righteous and Tami makes excuses for her behavior.