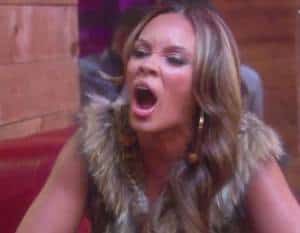 When Basketball Wives creator and “producer” Shaunie O’Neal gave an interview mentioning the possible firing of three ladies, it was the turning point for the controversial reality show. After a season of viewer outcry over cast member bullying and constant assurances of upcoming “balance”, picking off at least one member of the circle in order to show that priorities were indeed changing would have gotten the heat off the show. Additionally, it would have given Basketball Wives some nice forward momentum, sending the message to fans and critics alike that behavior like we saw in season four would not be tolerated. All the lip service done by O’Neal, VH1, and various cast members about how “troubled” they were about the direction the show took and the upcoming veer into positivity couldn’t have been for naught…right?

According to TMZ, Royce, Jennifer, and Kesha are all but officially off of Basketball Wives, though VH1 refused to confirm or deny the story. If true, it will leave the circle (Tami, Evelyn, Shaunie, and Suzie) completely in tact, with Kenya the only remaining member of the cast. It doesn’t really surprise me, as Royce was reduced to a very minor footnote in season four, Kesha has been (rightfully) badmouthing the show for the way she was treated, and Jennifer has yet to drop her lawsuit against Nia or Nia’s wig, respectively, but I’m disappointed nonetheless.

All the sanctimonious hand-wringing and faux apologies that Tami, Evelyn, and Shaunie have been doing since the controversy erupted have been proven to be merely for show. I’m all for a redemptive arc and giving someone a chance to prove themselves, but the fact that nobody was “punished” for their actions during season four is shameless and something of true cowardice and ignorance. O’Neal could have won major points had she taken a real stand against that kind of behavior and put her show’s integrity over her friendships with the other women; alas, the Basketball Wives mother hen has shown through her actions that she completely co-signs every word, every action, and every truly heinous action of her cohorts.

For all her posturing about being a family woman, a businesswoman, and a woman of God, O’Neal has proven that she is, in her words, a “hot ghetto mess”. And judging by the make-up of the show going into the fifth season, it seems that birds of a feather do, indeed, flock together.