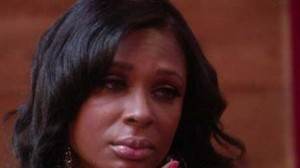 On Sunday’s season premiere of Basketball Wives, we saw the downfall of Evelyn and Jennifer’s 14 year friendship over a blog that Jennifer wouldn’t claim responsibility for. While it was a little sad to watch two what-we-assumed-to-be close friends duke it out, it was an exclamation point on an entertaining opener and promised that Basketball Wives was undergoing a major shift in season four.

However, the show isn’t losing one of its main selling points, judging by the sneak peek for episode two. Alliances may be changing, but the Basketball Wives still love to talk about any and everybody, including their former friends. You just knew that the Evelyn/Jennifer would become instant cannon fodder for the other ladies and who each ran to afterwards may give indication of where loyalties lie. Evelyn spends her time in the video alternating between being exasperated at and making fun of Jennifer, joined by Shaunie and President, Founder, & CEO of Team Tami, Tami. Jennifer, meanwhile, has gotten closer to Suzie; if the battle for Basketball Wives supremacy comes down to a numbers game, the future Mrs. Ochocinco may have the advantage.

Especially since Royce couldn’t give a you-know-what about either of these two chicks, choosing to focus on her burgeoning career rather than the fight. Royce is in a rather interesting position going forward, new friend Kesha on the scene and former “enemies” breaking up their friendship. She went from being the pariah of Basketball Wives to having a little bit of power now that the hive mind of the circle is no more. Royce could easily lay low and not fool with any of these drama queens, but with some real back-up and a fractured group of wives scrambling to find a new team to play for, I think she may be able to cause a little trouble and I cannot wait to see it.

Basketball Wives airs Monday nights at 8:00 on VH1. If you missed the premiere, you can check it out online or read thoughts on it from myself and Royce.