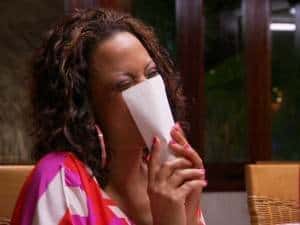 In July 2011, Basketball Wives producer Shaunie O’Neal penned a now-infamous article for CNN defending her show, talking about the fact that she strove for “a positive message despite the drama” and emphasizing the need for balance. At the time, I agreed with O’Neal (I know, right?) regarding her quest for positivity, though ultimately expressed hope that the show could bury its negative attributes and highlight the positives by becoming less fight-heavy and more mindful of each woman’s journey. As season four draws to a close almost one year later, has the show made any strides toward balance? And if not, can it ever become a more positive show?

At this point, I don’t see Basketball Wives ever becoming a positive show and you can look no further than the interviews, personal statements, and Twitter accounts of the main culprits in making this assumption yourself. Part of making an immense change in attitude, disposition, or lifestyle is accepting your responsibility for the things that have went sour and becoming accountable for your actions; you can’t become better without fully understanding what made things worse, nor can you begin the type of personal evolution that Evelyn, Tami, and Shaunie have talked about while continuing to give excuses or qualifiers for your behavior. Rather than admit full culpability, each of these women have made subtle (or not so subtle, in some cases) things to let the audience know that their collective heart just isn’t in this kumbaya business. For example, each woman has tweeted (or retweeted) various things about “haters”, how successful they are, and an endless array of compliments and insults to the “haters” while never really addressing the issue at hand. Everything they have to say that’s apologetic or remotely remorseful for their actions this season comes in carefully worded publicist statements and personal blogs where even then, they’re not fully coming clean about how poor their behavior is and how they’re going to change.

Either they talk about their frustration that other reality shows don’t get the same scrutiny, they atone for only part of their wrongdoing (e.g. Tami and her “I’m sorry for my actions but not my words” garbage on the reunion), or, in the case of O’Neal, they get extremely defensive about a property that they’ve tried to dissociate themselves with as recently as the finale. If she was truly sorry and not simply trying to do damage control on a brand that may be evolving into a feature film in the near future, wouldn’t she not have to qualify every statement she makes about the bad behavior on the show? Wouldn’t she actively condemn the actions of Tami and Evelyn, the two women that have been at the center of the major fights this season on Basketball Wives? Wouldn’t she be doing her best to make amends with Jennifer and actually film with Royce? If Shaunie can put on her holier-than-thou church hat and talk about how awful the fourth season got in terms of drama, why can’t she do something about it rather than (implicitly) co-signing every move that her two cohorts make? Instead of actually making a stand for something, she’s a merely figurehead of a producer, content to not do a damn thing and suddenly take credit for the mere possibility of actual change on Basketball Wives.

Every word they say about their poor behavior and how they want to make a change in yourselves is undercut by the fact that Basketball Wives is coming back for a fifth season and Evelyn has a spin-off coming out in the fall with her fiancee. It reeks of half-stepping damage control, in that the outrageousness has kept them solidly as VH1’s #1 reality show* but they want to make people think that they’re making an effort to become better in the future. The future, as in “hey, if you want to see us act like we have half a lick of sense, please watch next season, but don’t worry, it won’t get too normal”. If change isn’t accepted and fully integrated into one’s life, backsliding is all but guaranteed, regardless of how much “anger management” Tami goes to or how badly Evelyn wants to “show another side” of herself. With every qualified apology and insincere attempt at covering the wounds that the show suffered in season four, I get more confident that any attempt at change will have unraveled by around the fourth episode of next season, particularly if the show keeps on the people that continually butt heads with the circle.

Can Basketball Wives become a more positive show? If it does, don’t expect it to last or to be the least bit genuine, considering the cast behavior at the reunion and on various internet platforms both during and after the season. To make change, you have to want to change and I don’t believe for half a damn second that “the circle” wants to be anything other than the catty, conniving group of hens that they have been all season long. They’ve not shown any genuine remorse or understanding for why what they did was wrong and why the viewers have reacted so strongly; to them, it’s all a matter of people being “haters” and not understanding the role that editing plays in reality TV, which is the type of sad delusion that comes with believing your own hype. It’s not hating if you actively want people to do better, nor is editing to blame for putting fish in Kenya’s room, stealing Kesha’s purse, or ending a friendship with Royce over not getting your behind kissed enough. It’s up to “the circle” to accept personal responsibility and accountability for the actions of themselves and to hold their loved ones to the same standards. Until then, I’m afraid that Basketball Wives will be the type of trashy, lowest common denominator that even I as a fan of reality TV cannot even defend.