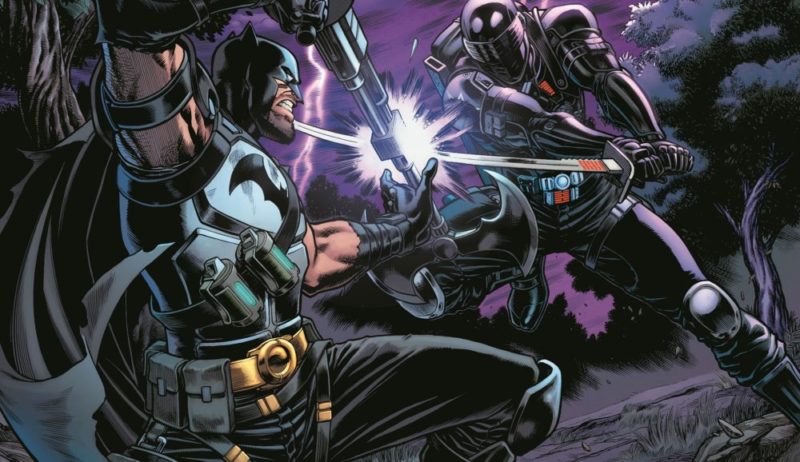 So, Batman/Fortnite: Zero Point #3 starts off with an “Interoffice Memo” from Loop Observation to something called “PsyOps” with the subject line “I’m worried about the Batman.” The whole premise of this issue of the comic seems to be a one-sided conversation between whoever is on the Loop Observation end of whatever this is (my best guess would probably be Agent Jonesy?) and then whoever they are communicating with, unfortunately, we don’t actually get to see any of the replies from the person on the other end of the memo. Basically, Loop Observation has noticed that ever since Catwoman (known as asset: Catwoman) has escaped the Loop, Batman has “displayed a single-minded determination to follow her, bordering on mania.” While this Batman doesn’t retain any memories of his past life, it definitely falls in line with Batman’s character in the regular DC comics, as he actually ends up marrying Selina “Catwoman” Kyle, so it makes sense that he would feel an overwhelming sense of connection and need to find her. While it is physically impossible for any asset in the Loop to retain any conscious memories, it is more than possible for those assets to retain emotional memory, which is why Batman is able to continue to improve his odds against the other assets time and time again. This is personal to him.

Time For a Crossover

Whoever is running Loop Observation continues to throw as much as they have at Batman, to the point where they eventually send in Snake Eyes. Yes, that Snake Eyes. The absolutely deadly dude from G.I. Joe, the one who doesn’t say a word – that guy. The two continue to fight over and over again, to the point where whoever’s up in Loop Observation says that they “should start selling popcorn.” Eventually, the fights between Batman and Snake Eyes have become so deadly and entertaining, that even the rest of the assets have entirely stopped fighting, just so they can stop and watch Batman and Snake Eyes beat the hell out of each other. After a while, the whole retaining emotional memory argument resurfaces again, forcing Loop Observation to wonder if respect is an emotion, because it is clear that the two fighters have fought so much that they have a mutual respect for one another even after so many different iterations. The longer Loop Observation watches Batman and Snake Eyes, the more they start to worry about them, because they’ve started to work together to take down other assets that are interrupting their own fight.

In the final battle between Batman and Snake Eyes in Batman/Fortnite: Zero Point #3, Snake Eyes ends up nearly falling off the edge of a mountain when Batman reaches out and grabs his arm to prevent Snake Eyes from falling. They then start to communicate in a sign language that is entirely unknown to Loop Observation, and it looks like they have finally come to an understanding. Snake Eyes marches to the edge of the storm, turns around, and salutes Batman as he allows the greatest detective to exit the loop once and for all.

Out of the Loop

Once Batman finds his way out of the loop, he lands on a hard surface outside, as he hears a voice say “Don’t do anything stupid.” He turns around to see Catwoman being held hostage by none other than…Deathstroke! Then the issue ends with the classic “To Be Continued…”

I have to say, I didn’t have very high expectations for this comic series going into it, but the more I read, the more I’ve found myself enjoying it more than I thought that I would. I was definitely not expecting to see Deathstroke in a Fortnite comic. Tune in next time when we go over Batman/Fortnite: Zero Point #4!