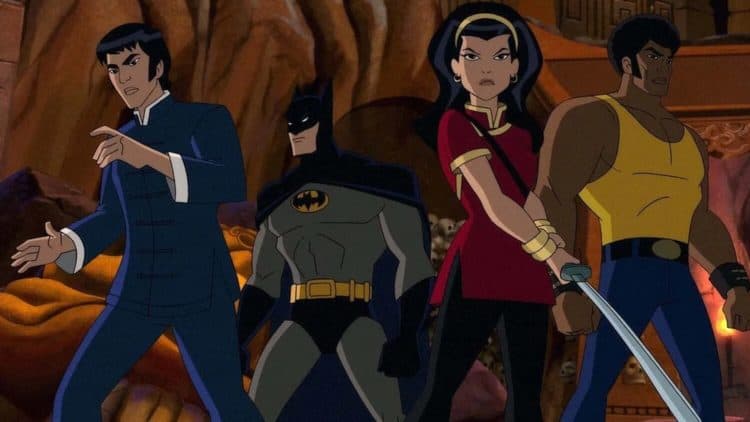 It’s kind of funny how the animated Batman movies can appear to get an R-rating and the live-action ones can’t, isn’t it? In Batman: Soul of the Dragon it’s kind of obvious that it’s not taking off any comic and that it’s bringing up a story idea that’s going to be kind of fun and is also going to use some impressive voice casting to make it work. Kelly Hu takes on the role of Lady Shiva while Mark Dacascos takes on the role of Richard Dragon, while Michael Jai White voices the part of Ben Turner/Bronze Tiger. David Giuntoli will star as Batman/Bruce Wayne as James Hong takes on the part of O-Sensei, making this a great cast to see for an animated feature and also the type of voices that will bring rise to the time period that this movie is set in. It would appear that the heroes will be meeting up as they train and will have to join forces years later when a shared enemy arises to threaten them. The animated movie won’t be hitting the scene until January of 2021, which isn’t too far off, and it already looks like it might be kind of interesting if only because being R-rated it doesn’t have as many limitations as any other animated movie might. One shouldn’t be looking for too much out of the ordinary though since this is Batman and it’s not too likely that things will go that far apart from swearing and a good deal of violence.

That’s a big part of what Batman is known for though, being violent towards criminals and being able to take on just about anyone. It’d be fun to see him take on Lady Shiva in the movie though just to see where they stand in terms of sheer toughness and their martial arts skills. A lot of people would say that in a fight to the death that Batman would take Lady Shiva out simply because…he’s Batman. But considering that Shiva has beaten him in the past, it’s fair to say that she’d stand a pretty good chance if she could get around all his gadgets, since the fact that he wears armor isn’t really an advantage when fighting someone like Shiva, who can kill with her bare hands and punch through stone. But in this movie they’re allies it looks like and they’re out to team up with one another as they take on a common enemy and employ their skills to stand together stronger as a group than as individuals. The 70s theme for this movie is kind of interesting since it takes things back to a time when a lot of people believed martial arts was almost magical since those that practiced it appeared so strong, quick, and capable of taking down just about anyone.

A lot of the Batman animated movies have been wildly popular over the years but it’s fair to say that not all of them have taken off of the comics as much as some people might have expected, which is either great or irritating depending on who you’re asking. Some people do like to see the stories that are put onto the small or big screen take after the source material that spawned them while others are impressed by just about anything that has a basis in the comics but is still original enough that it becomes something else when released to the public. In the case of Batman, there are so many different stories and so many different ways that he’s been shown in the movies that trying to pin down just one version and calling it THE definitive canon is next to impossible since fans are bound to stick close to the version they enjoy and won’t hear of anything else being labeled as canon. There are definitely elements of the dark knight that have remained the same over the years, but many others have changed so often that it’s difficult to say which one is the most popular. It’s usually wiser to state that people have their preferred vision of Batman and call it good.

This version sounds as though it’s going to be a story that doesn’t conform to anything that’s been seen yet apart from the characters being easy to recognize by the fans that have been following them for so long. That has a big advantage since the story should be fresh, innovative in its own way, and able to snare the interest of a lot of Batman fans that happen to enjoy seeing anything new that can keep them entertained for an hour or more. It’s also bound to be worth it since anything with Lady Shiva is pretty interesting as well, given that she’s one of the few that can give Batman pause.