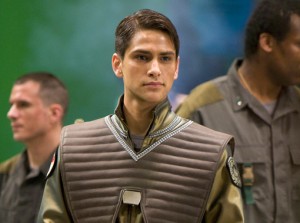 Remember when there were rumors that Battlestar Galactica:Â  Blood and Chrome was under consideration to be upgraded from webisode format to full-blown series?Â  Well the fact that it didn’t happen means nothing in weighing the success or failure of BSG: B&C, according to David Eick.Â  “I’m so happy to have such a great and comprehensive cross-section of the press today because I feel like there’s a certain record to set straight which was a little bit frustrating to me a few months ago when I saw the headlines that the Blood & Chrome project had somehow been rejected or was a failed pilot or wasn’t going to make it on the air.”

“I think where the confusion is that for a moment the network after seeing the script said, ‘Gee, we don’t want to rule out the possibility of just advocating the online venture altogether and throwing this up as a pilot for a traditional series to Syfy.'” Eick explained further.Â  The fact remains: Battlestar Galactica: Blood and Chrome is now what it was always intended to be, even if for a moment there was a glimmer of hope that it would be more.

While on the subject of more, though, can we expect more Battlestar Galactica in the future? As far as Blood and Chrome goes, the answer seems to be ‘maybe’.Â  “… as an exercise, which is not uncommon with these things we, myself, Michael Taylor, David Bradley and – I’m sorry, kind of David Weddle and Bradley Thompson got together and with Jonas Pate, our director, hatched a next mission. Sort of what the next leg of this character study would involve and should we be fortunate to go forward. There was absolutely the kind of very organic kind of evolution of where we leave the characters at the end of this story and what we would pursue as our next tale. And I’m very hopeful and optimistic that we’ll be doing that soon.

One matter that was touched on with kid gloves by Eick was Syfy’s handling of Blood & Chrome‘s distribution.Â  The project has had various on-again off-again release scenarios, but Syfy ultimately went with the ambush approach:Â  announcing a few days in advance of the release that it would be released.Â  Eick answered criticism that Syfy did not give Blood & Chrome the respect it deserved by highlighting the fact that online distribution is nothing like television.Â  “We won’t know if the launch was insufficient until we see the results, but, to my way of thinking, or in terms of how I understand the online world, it just doesn’t work in the old-fashioned way. You’re not going to see billboards and a bunch of commercials; it’s all much more, as they call it, viral.”