The BBC Press Office has announced that their new Sherlock Holmes re-imagining from Doctor Who showrunner Steven Moffat and Who writer Mark Gatiss is to air some time during Week 30, 24-30 July 2010. The currently “unplaced” 3-part drama, starring Benedict Cumberbatch as Sherlock Holmes and Martin Freeman as Dr. John Watson, has been given a contemporary update to “ground the forthcoming tales in reality, and appease ardent fans of the classic tales”. Each episode is 90 minutes long, and have been written by Steven Moffat (Doctor Who, Coupling), Mark Gatiss (The League Of Gentlemen, Doctor Who, Crooked House), and Stephen Thompson (Whipping It Up, Mutual Friends), and directed by Paul McGuigan (Lucky Number Slevin, Gangster No 1, The Acid House) and Euros Lyn (Doctor Who, Torchwood). 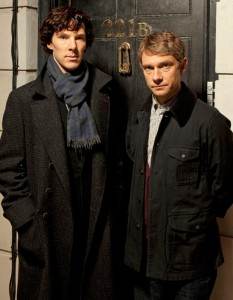 The world’s favourite detective has emerged from the fog. With sparkling scripts and unforgettable performances from the two leads, Benedict Cumberbatch (Sherlock) and Martin Freeman (John Watson), this is Sherlock for a new generation.

Sherlock Holmes was always a modern man. It’s the world that got old. Now he’s back as he should be: edgy, contemporary, difficult — and dangerous — in three new dramas on BBC One.

Watson, a doctor, soldier and war hero, is fresh from military service in Afghanistan. A chance encounter brings him into the world of Sherlock Holmes, a loner, detective and genius. The two men couldn’t be more different, but Sherlock’s inspired leaps of intellect, coupled with John’s pragmatism, soon forge an unbreakable alliance.

A woman in pink lies dead in a derelict house, the fourth in a series of impossible suicides. DI Lestrade is the best Scotland Yard has got, but even he knows he can’t compare to the young man who can tell a software designer by his tie or an airline pilot by his thumb.

Sherlock has a unique analytical mind, earning his living and staving off boredom by solving crimes. The weirder and more baffling the better…

Across three thrilling, scary, action-packed and hugely entertaining episodes, Sherlock and John navigate a maze of cryptic clues and lethal killers to get at the truth.