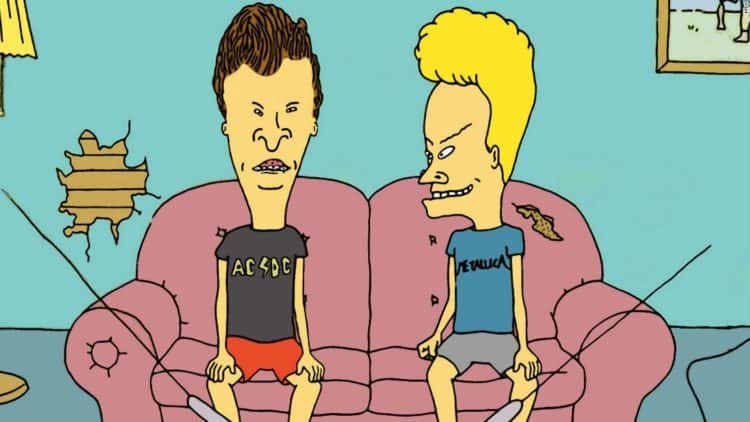 It’d be easy to say that the 20s are all about R&R, remakes and reboots, but this practice started well before the 20s came around so it’s fair to say that it’s a continuation of the same old, same old that’s coming to Paramount+ since the transition from CBS All Access is going to be done with a great deal of material that’s being rolled out, which consists of a fair amount of material that’s been seen before and is going to be given another chance not only at being shown as a series but also as a movie. How many people remember Beavis and Butt-head Do America? It’s easy to think that a lot of long-time fans would, but if not then it sounds as though the pair will be getting another movie, AND they’ve been given a two-season approval at Paramount+, which is to say that we’re going to be seeing a lot more of them since apparently the demand is still there and the memory of these two is great enough that people want to see what might happen when they’re given a chance to make new ones. So it’s time to brush off the old sofa and prepare for the chuckling and sniveling of two of the most memorable characters to ever come out of the MTV era.

It’s not much of an insult to say that these two were kind of a joke when they were still popular since they were among the dumbest characters ever made, yet they were somehow still counted as two of the most popular as well, at least when it came to the audience. In their own show, they were among the most reviled characters around since no one could stand them and they often found themselves on the horns of one dilemma or another. One thing that did occur during their show were music videos that they would sit and ridicule in various ways. But the point is that it still pushed the idea of music videos, which should make a lot of people wonder what’s going to happen now that they’ve been approved for two seasons. Are they going to show reality TV shows now or clips of them? That might be kind of funny but also awkward since the idea of the duo learning about streaming, YouTube, and how to access music videos or anything else they might want, is something that might be kind of interesting, but it’s also kind of beyond the realm of what should happen since the two are morons and don’t know much other than to turn on the TV and grab a soda from the fridge every now and then. Heck, in their first movie they had to figure out that the TV was missing before they went on their road trip.

Thinking about these two and how their series is going to go is enough to roll your eyes and think that it’s going to be hilarious but it’s also going to be intentionally dumb as hell since that’s how the whole thing stays funny. But it is interesting to wonder as to whether or not there will be an appearance by various characters that the two have interacted with over the course of their show since Tom Anderson, the inspiration for Hank Hill, was a part of the show at one time, as was Daria before they both were given their own programs. Seeing them return would be kind of interesting if that was to happen, but at this point, it’s not even known what the whole thing is going to look like when it’s all said and done, so trying to tack on extra characters at this point is bound to be something that the creators aren’t even thinking about. It’s funny to think of what the storyline might look like at this point since it’s been so many years between then and now, but one has to think that things might have at least been pushed forward a few years since otherwise, the two are still going to be dim-witted teenagers that are still utterly clueless about life. It’s also fun to think that the drifters who were obviously their fathers from the first movie might actually return, but then again, it’s not even certain that the series and movie are going to coincide with each other, which is kind of odd really since one would assume that this would be the case.

The whole idea of bringing Beavis and Butt-head back is one that likely has some people cheering and some of them groaning since the series is one that is utterly brainless, which is what some folks like. But we’ll get a chance to see what’s going to happen when it finally gets here, and then we can judge whether or not it was worth the effort.