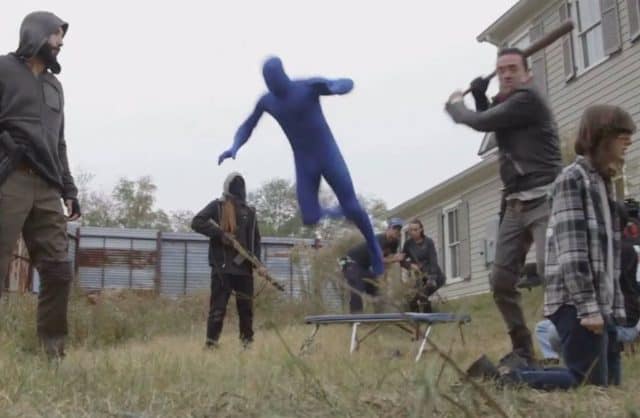 Numbers just came out today on the Walking Dead Season 7 finale and they weren’t great. While most shows would kill to have the ratings that The Walking Dead has, the season 7 finale actually ranked the lowest in the last 5 years. Â  Still though, most fans who did see it liked it.Â  The battle may have only been 10 minutes of screen time but it was worth the wait.Â  Perhaps the most talked about scene from the entire episode was when Ezekiel’s pet tiger Shiva went into full attack mode.

Surely they couldn’t have filmed this with a real tiger right?Â  Of course.Â Â  And as you can see in the photo above it looks a lot funnier when there’s a guy who reminds you of Charlie Day’s “Green Man” from Always Sunny in Philadelphia.Â Â  After the finale, actor Chandler Riggs tweeted a photo (the photo you see above) from filming the episode.Â  AMC shared a behind-the-scene video of the actor (Scott Hunter) jumping off a trampoline to get the air and attack like a real tiger.Â  Must be pretty interesting to have a job where your sole purpose is to attack people like a tiger.

Check out the full video and fascinating effects it took to create this scene below: