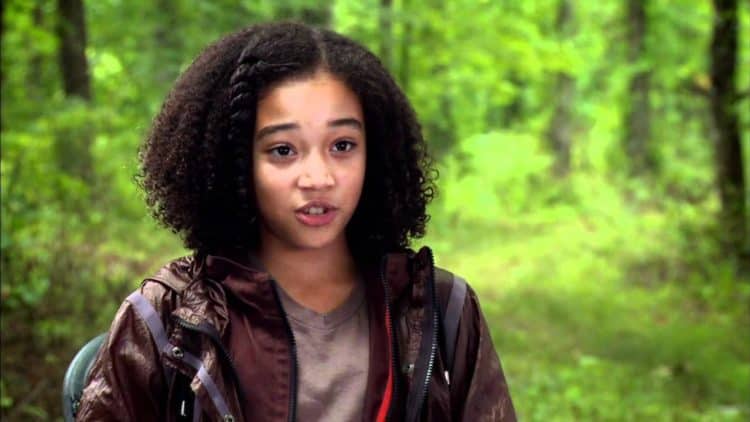 Amandla Stenberg has been around for a while since by the age of 4 she was doing modeling gigs for Disney. It’s fair to say that she’s moved beyond that point in her life and has been getting bigger and better gigs since, though so far a lot of what she’s done has kind of gone under the radar in a way since she hasn’t become a household name quite yet. Those that have watched her movies though would likely differ in their opinion since they’ve seen her complete a few roles that were nothing less than heart-wrenching due to the circumstances under which they took place. You could say she’s kind of made for dramatic, very heartfelt movies that paint her as someone that either needs to be taken care of or at the very least needs a bit of help now and again since she’s not a fully capable human being for one reason or another. She’s a strong character on screen, but in terms of her characters, a few of them are in need of a lot of help at times.

Obviously Cataleya isn’t entirely unschooled when it comes to getting away since after watching her parents get gunned down she makes her escape shortly after stabbing the hand of the man responsible for their deaths. You might have guessed that Rotten Tomatoes gave this movie a pretty horrible score but the fans were a lot more forgiving since it did feature a lot of action and got right to the point quite often since it’s a revenge story plain and simple. The main character had to take some time to grow up and learn the business of killing so obviously the time jump was necessary, but once she got rolling there was no stopping her after a while.

Rachel Simon of Bustle points out that this movie could have just as easily been set in 2016 but the idea that it was set in the 90s makes it even more intriguing since it takes risks that back then might have seemed kind of over the top in a big way. Mark and Jack are completely smitten over one another but it’s a love that kind of has to be kept secret for the most part since it’s a bit obvious that a lot of people simply wouldn’t understand. When Mark starts dating their mutual friend Sarah however Jack becomes a bit unhinged and resentful and things just tend to go downhill from there as you can imagine.

To think that it is entirely possible to suffer from under-exposure to the outside world is something that a lot of don’t tend to think about since from the time we’re born many people are exposed routinely to a lot of things this world has to give. But Maddy’s mother, who was keeping her away from the world out of a slightly warped sense of love and desire to keep her close, was almost the end of her daughter since when Maddy left the house for the first time she became exposed to the world as it is, not as her mother would have it, and the process nearly undid her. Eventually however the story does have a happy ending as Maddy’s immune system finally gets the workout it needed and she finds her way out into the world where she belongs.

Sentiments against police aren’t always false unfortunately and shooting incidents that are over nothing tend to happen a bit too often for peoples’ liking. When Starr is a witness to such a crime committed by an officer however she stays quiet for so long before it’s revealed that the officer is not being indicted for his actions. At that point her neighborhood erupts into a frenzy of peaceful protests and riots that threatens to tear it apart. Starr stands her ground and does her best to speak out against the violence as she and her neighbors seek to find some way to get justice for her slain friend and to keep their homes in one piece.

Alanna Bennett of BuzzFeed reminds us that there was actually a racist backlash from the character of Rue being taken up by a black girl as opposed to a white girl as was written about in the book. This seems pretty silly to be honest since the part of Rue was played so perfectly by Amandla that it shouldn’t have mattered in the slightest what color her skin was. After all this was one of the most emotional and meaningful deaths in the entire story that it kicked off the idea of Katniss standing for the people since she was the one that saved Rue in the first place before she was taken out of the game.

She’s had an interesting career thus far, it’ll be fun to see how it continues.