Home
Friends
The Best of the Best Friends Season 3 Episodes 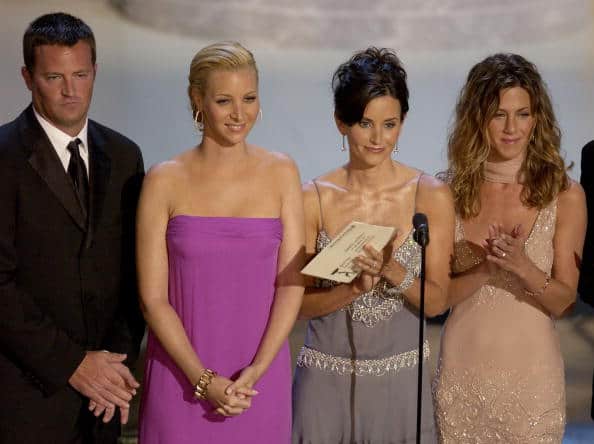 It is hard to believe that it already week three in our countdown of our favorite Friends episodes. This week will feature our three favorite episodes from season three. Wow, that is a lot three’s! The third season ofÂ FriendsÂ featured the break up of Ross and Rachel, Phoebe meeting her younger brother, and Chandler and Joey adopting a baby chick and duck. Though season three was not one of the better seasons of the comedy, there will still a few classic episodes. Here are our top three picks:

The One Where No One’s Ready, original airdate September 26, 1996

ManyÂ FriendsÂ fans would select this second episode of the season as their all-time favorite. Unlike most episodes, this one takes place in the exact amount of time the episode airs and only includes Monica’s apartment for the setting. Ross is attending an important banquet at the museum and he has invited the entire gang. He arrives at the apartment ready to go and wants to make sure every is ready to leave. Phoebe later shows up ready as well. Rachel is getting ready but still needs to decide what to wear. Chandler and Joey are relaxing in the living room and only need to go put their tuxes on. Chandler gets up to use the bathroom and Joey ends up stealing his seat. The two spend the remainder of the episode arguing over who’s seat it really is. Joey accidentally throws hummus on Phoebe ruining her dress. She becomes distressed and needs to pick out a new outfit. Monica has arrived home and is still hung up on breaking things off with Richard at the conclusion of season 2. She ends up leaving him a creepy phone messageÂ and then ends up letting the gang listen to it to see if she is “breezy” enough. While hacking into his account, Monica here’s a message from Richard’s daughter, then gives her a call explaining what she had done. In the end, Monica tries to leave another message, which ends up becoming Richard’s new outgoing message. Phoebe is able to findÂ a gaudy Christmas present bow to cover up the stain and is now ready. Chandler steals all of Joey’s clothes and to get back at him Joey wears every single thing Chandler owns. Ross yells at Rachel, who in turn decides she is not going. In order to get her to agree to come, Ross almost drinks a glass of fat that some of the gang confused for juice earlier in the episode. In the end, everyone is ready to leave. It is hard to imagine all of this took place in less than thirty minutes, but it did!

Monica: Maybe we could call the phone company. Maybe they could change the message. Maybe they can change his number.

Phoebe: Yeah, after this, I think he’ll be doing that himself.

The One with the Race Car Bed, original airdate November 7, 1996

Could you imagine ordering a new bed and then come home to find a child’s race car bed sitting in your bedroom instead? That is exactly what happened in this seventh episode ofÂ FriendsÂ season 3. The gang is watching TV and a commercial for the Mattress King appears. He has slashed prices because he is so upset that Janice is leaving him for Chandler. Monica and Phoebe head over to the store to purchase a new bed. Later, the bed arrives and Phoebe and Joey are in the apartment. He is up for a new soap opera roll onÂ All My Children.Â The character is Nick the Boxer, so Phoebe asks to see Joey’s skills. He playfully taps her and she fires back with a punch to the nose. Once it starts bleeding, Phoebe leads Joey into the kitchen to take care of the injury. Neither of them notices the race car bed going into Monica’s room until it is too late. When Monica goes to complain at the store, they refuse to make the exchange. Joey requests to see the Mattress King and finds him making out with Janice in his office.

Elsewhere, Joey is teaching an acting class for soap operas. He finds out that one of his students is also up for the role of Nick the Boxer. In order to get an upper hand at the audition, he suggests that the student play the role as gay. The producers of the show end up loving it and cast him, much to Joey’s dismay.

Phoebe: (to a child sitting in a race car bed) You know, in England, this bed would be on the other side of the store.

The One with the Football, original airdate November 21, 1996

Who does not like aÂ Friends’Â Thanksgiving themed episode? Â This classic was the ninth episode ofÂ Friends’Â third season. The gang decides to play a fun game of football while waiting for their Thanksgiving turkey to cook. Ross and Monica decide to be team captains and pick their teammates. Phoebe and Joey join Monica and Ross picks Chandler and ends up being stuck with Rachel as she is the last one selected for a team. The game gets pretty heated between Ross and Monica, especially when Monica shows him The Geller Cup. He thought the family trophy had been destroyed years prior, but Monica dove into the lake to retrieve it. At halftime, Monica’s team is winning and she bets Ross that she can still take the victory even if she trades Joey to Ross’ team and takes Rachel. The guys’ team end up tying the girls’ team. The girls try to do whatever it takes to win, including have Phoebe flash Chandler to intercept the football. In the end, Rachel catches the game winning throw, but ends up making the touchdown too early. Ross and Monica fight over the ball and refuse to let go.

There is also a small “B Storyline” where Joey and Chandler fight over a girl named Margha. Joey assumes that Margha will like him more than Chandler, but she actually picks Chandler. Chandler over celebrated the win, which annoys Margha. She ends up leaving the park with neither guy.

Chandler: No, no, no. Losers actually rhyme.