Home
Friends
The Best of the Best Friends Season 4 Episodes 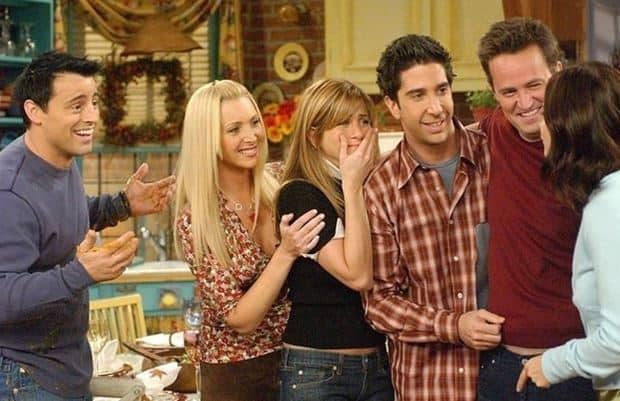 It is already time for TV Overmind to list our three favorite episodes from the fourth season of Friends.Â  If you did not already know, in honor of Netflix carrying all 10 seasons beginning January 1st, we have included our top episodes from every season to watch in case you are not able to sit through 200+ episodes of the series. Though we do recommend you re-watch every single one because they are that good we wanted to provide an article every week with our favorites.Â  Here are the picks for season four:

I must admit, the 4th season of Friends is probably my least favorite of all. Why you ask? This was the season that featured Kathy who not only cheated on Joey, but Chandler too.Â  Then there is Emily, a person who is even more irritating than Ross. The storyline between them was pretty unbelievable. Thankfully, there are still a few decent episodes of Friends featured during this season and the first one is actually about the holiday where we give thanks.Â  It is Thanksgiving time and Monica is cooking dinner for the gang. This year, the gang decides to participate in Secret Santa for Christmas because Monica and Phoebe are low on money.Â  Monica accidently gets ice in her eye and is taken to the doctor. She does not want to go because Richard is her optometrist, but he is out of the office and his son is filling in for the holiday. Monica is attracted to him and invites him over for dinner.Â  Monica ends up kissing Richard’s son and is instantly weirded out.Â  The gang is also disgusted but preoccupied because Chandler must sit in a box and think about letting Joey down when he stole Kathy away.Â  At first, Chandler is cracking jokes to pass the time, but Joey says he is no longer allowed to talk. Kathy stops by to see Chandler and tells him she is going to break things off with him because she does not want to be the cause of him and Joey’s fight.Â  After she leaves, Joey opens the box and forgives Chandler.Â  Just another Thanksgiving on Friends. I think this episode is one of my favorites because of it being holiday themed and a majority of the episode takeing place in Monica’s apartment and that usually means the episode will feature just the core six characters.

Monica: How cute is the on-call doctor?

Rachel: So cute I’m thinking about jamming this pen in my eye!

This episode of Friends may be on many fan’s favorites list and for good reason.Â  The episode starts with Chandler and Joey trying to guess what is in a grocery bag of Monica and Rachel’s.Â  They are able to guess all the items inside. Monica asserts that that does not mean that the boys know the girls better, so they decide to play a game to find out who really knows the others the best.Â  They ask Ross to create the questions and also host the game.Â  The stakes of the game continue to escalate with Monica agreeing to give up her apartment if they lose, but Chandler and Joey must get rid of the chick and the duck ifÂ the girls are the overall victors.Â  However, during the lightening round the girls are unable to figure out what Chandler does for a living and lose the game by one point. Â The end of the episode shows the girls unpacking in their new place and finding something living in one of the drawers in the kitchen. On the flip side, the guys love all the closet space they have!

Phoebe was involved in her own storyline.Â  She is getting Frank and Alice’s five embryos implanted inside of her. She is also alerted to the fact that there is only a 25% chance that she can get pregnant and that the procedure costs $16,000.Â  By the end of the episode, Phoebe takes a pregnancy test and it is confirmed that she will be having a baby.Â  Phoebe is my favorite character on Friends, but her storyline cannot compete with the awesomeness of the trivia game over the two apartments.

Ross: What was Monica’s nickname when she was a field hockey goalie?

Have you ever liked someone so much that you decide to throw a pretend party just to spend time with them? Well, I have not either but Rachel Green does this on the 16th episode of Friends fourth season. Â Emily is going to be heading back to England, so Rachel takes advantage of this and decides to throw her a going away party. She is using the party in order to get closer to her client Joshua because he is finished buying new clothing for the season. She invites him over to the apartment and he gladly accepts.

While at the party, Rachel tries to think of different things she can do in order to give Joshua a kiss. Monica suggests that the gang all play spin the bottle. During the game Joey and Emily have to kiss three times, which Ross puts a stop to. When it is Rachel’s turn, she lands on Joshua and is about to have her dream come true when Phoebe feels the triplets kicking.Â  Rachel then proceeds to put on her old cheerleading costume because she was always able to get whatever guy she wanted when she wore it. She creates a cheer to wish Emily a fond farewell then cartwheels right into the wall in her bedroom. At the end of the party Joshua admits that he has liked Rachel for awhile and all is now right in the world, aside from Rachel’s fat lip she got from her fall. This episode is one of my favorites of the season because it really shows off Jennifer Aniuston’s comedic talent.

Ross: Yeah, she’s got to go back to London. But you know what? I’ve been prepared for this from the start. We both knew we had two weeks together, and then that’s it. You know?

Joey: Hey, that’s what all my relationships are like.

Chandler: Yes, but in Ross’ case, they both know in two weeks that’s it.

What is your favorite episode from the fourth season of Friends? Let us know in the comments section below.Â