Home
Friends
The Best of the Best Friends Season 7 Episodes 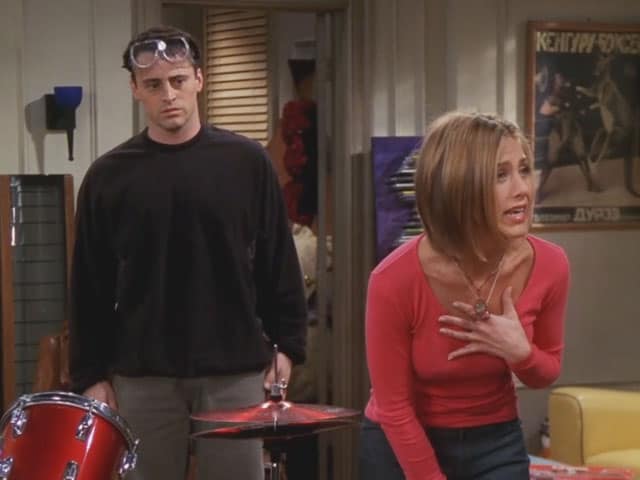 In case you did not already know (and I am not sure how you would not know with all the advertising devoted to it),Â Friends is finally on Netflix streaming for your viewing pleasure. Now you can relive such awesome moments like when Ross said Rachel’s name at his wedding to Emily, the blind date with Mike that Joey set up for Phoebe, or when Chandler tried to find out what Monica was hiding from him in the locked closet.Â  We at TV Overmind have been watching the classic sitcom for the last few weeks to help our readers pick out the top episodes for each of the glorious ten seasons. We are now up to season seven which was when Monica and Chandler got married, Rachel turned 30, and Ross and Joey took a nap together. Check out our three favorite episodes from the 2000-2001 television season. Season seven is by far my favorite of Friends. The writing was sharp and witty and the season was full of many great guest stars. It was hard to pick just three classicÂ episodes, so if your favorite episode is not on the list, I probably still loved it.

“The One with the Nap Partners,” original air date November 9, 2000

Monica and Chandler have recently become engaged, so she decides to take the girls out to brunch to celebrate. She informs the two that they must decide between themselves who is going to be Monica’s Maid of Honor. The good news is that each girl will get their turn to be a Maid of Honor because they will rotate the duties once Phoebe and Rachel find the man of their dreams and get hitched.Â  In order to become the Maid of Honor, Phoebe lies to Rachel and says she has never held the title. Rachel agrees to let Phoebe be Monica’s because she feels bad for her. That is until Joey breaks the news that Phoebe was lying. In order to settle this, they hold a competition that involves several very hilarious Maid of Honor scenarios with Ross and Joey hosting. Phoebe becomes the victor, but after Rachel shows her all of the items she has been saving for Monica’s big day, Phoebe agrees that Rachel is the best woman for the job.

You may be wondering where the title comes from for this episode. Well, Joey and Ross end up falling asleep on the couch together while watching Die Hard. They both admit that it was the best sleep they have ever had in their lives. Joey keeps trying to coax Ross into another nap. When Ross finally agrees, they wake up to the rest of the gang watching them.

Joey: You want something to drink?

Ross: Sure. What do you got?

“The One with All the Cheesecakes,” original air date January 4, 2001

Aside from this being a ridiculously funny storyline, I think this episode is one of the greatest of the season because of the interaction and comedy of Matthew Perry and Jennifer Aniston. Very rarely is there a storyline between Chandler and Rachel, but after this outing you would have thought the writers would give them more chances to showcase themÂ together because they play off one another so well. The duo end up stealing a neighbor’s cheesecake and cannot get over how good it tastes.Â  They cannot help themselves when they see another sitting at their neighbor’s front door. They take the cheesecake back up to the apartment and end up splitting it in half so they both can enjoy it. Rachel ends up tripping and dropping her half on the floor. Â Chandler begins mocking her and because of this Rachel knocks his piece on the floor too.Â  In the final moments of this episode, the two are eating the cake off of the floor. Joey walks up, pulls a fork for his coat, and joins them in the feast.

Speaking of Joey, he and Phoebe meet for dinner on occasion to discuss the rest of the gang. He ends up standing Phoebe up because heÂ wanted to meet a girl. Phoebe lectures him on the importance of friendship and the two reschedule.Â  Phoebe runs into David, as he is in town for one night. She tries to get through dinner with Joey, but he finds out about her plan and tries to prolong the meal. In the end, he realizes that Phoebe truly loves David and agrees she should go see him. There is a very touching moment at the end of the episode when Joey comforts Phoebe after David leaves. This is why their friendship is one of the best to watch on Friends!

Chandler: Thank you for lunch.

Rachel: What? Wait a minute, I didn’t pay, I thought you paid!

Chandler: So apparently we just don’t pay for food anymore

In a month, Chandler and Monica are going to be getting married.Â  Phoebe and Rachel have forgotten to throw Monica a wedding shower, so they quickly try to put one together. Phoebe ends up stealing Monica’s address book to get a guest list and then also takes some cash to pay for the festivities.Â  The only problem is Rachel and Phoebe forget to invite Monica to the shower. When she arrives, they tell her all the guests have left. Monica says she only cares about the two of them and then everyone comes out from their hiding spot.

Elsewhere, Ross and Monica’s cousin has stopped by for a visit.Â  Denise Richards plays Cassie and whenever someone looks at herÂ the camera shows her running her hands through her hair in slow motion.Â  Chandler was ogling over her, so she is forced to stay with Ross.Â  When she arrives at his apartment, he is strangely attracted to her as well and tries to put the moves on her. She is definitely not cool with this.Â  In the end, she goes to Phoebe’s apartment and she is also very attracted to her.Â  A very funny Friends storyline!

The third storyline involves Joey and Monica and is a little too adult for this website. You will have to watch it on Netflix to find out what happens.

Cassie: (Phoebe is staring at her): What?

Phoebe: (to herself): Say something. Say anything! Ask her out she’s not your cousin.

What is your favorite episode from the seventh season of Friends? Let us know in the comments section below.