Home
Friends
The Best of the Best ‘Friends’ Season 8 Episodes 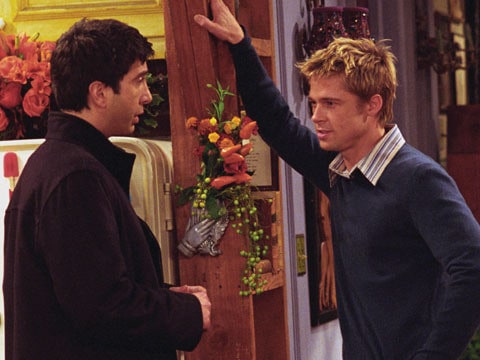 It has been over two weeks since Netflix began streaming every single episode of Friends for fans to binge watch.Â  Could you BE spending any more time watching this successful sitcom?Â  Well, if you have a job that is getting in the way of you watching Friends for hours on end, we here at TV Overmind are here to help.Â  For the last few months, we have been selecting the top episodes from each season of the series and showcasing them in an article each week. We are currently up to season 8.Â  This would be the season that Friends would finally take home an Emmy win for Outstanding Comedy Series and when Jennifer Aniston would receive her win.Â  Here are our picks for the greatest episodes from the season when Rachel gave birth to Emma, Chandler figures out that he likes to take baths, and Monica buys a really expensive and uncomfortable pair of boots.

Not only does this episode center on a video cassette, it also makes you realize that you are old because you know what a video cassette is as opposed to just Blu-Ray or DVDs. It is amazing to think how much technology has advanced in less than 15 years. The gang wonders how it came to be that Ross and Rachel hooked up and got pregnant. Rachel claims that Ross came on to her, while Ross says it is the other way around and he has the proof on videotape.Â  Everyone wants to view the tape, including Rachel so everyone can see that Ross was hitting on her.Â  The episode flashes back to Ross and Joey discussing the dry spell Ross has been having with the ladies.Â  Joey gives him a story to use that will make any woman want to sleep with you.Â  He lends Ross his video camera to practice rehearsing the story. Later, Rachel comes over and needs help addressing envelopes to Chandler and Monica’s wedding. Rachel ends up using the same story that Joey has told Ross, which is why he starts to kiss her.

Elsewhere, Monica and Chandler have just returned from their Honeymoon. They met a real nice couple during the trip and wanted to call them to hang out. They find out that they were “fake numbered” by the couple when the number they call keeps going to a Deli.Â  Chandler and Monica play the blame game as to why the other couple did not really like them.Â  Personally, I think it was both of their personalities that turned them away.

Chandler: Did you do it on our invitations?

Ross: Not on the ones we sent out.

Chandler: So just the ones you gave back to us and we had framed?!

Wouldn’t it be awesome if you could hire someone to do all your cleaning for you?! Well, that is exactly what Chandler did in this episode. He and Monica have become too busy to keep the apartment tidy, so he has hired a maid (played by the always hilarious Arden Myrin). Monica believes that the maid is stealing clothes from her because she is wearing her jeans. They have a stain on them near the crotch so Monica tries to find it.Â  When she tries to look, she gets stuck between the maid’s legs while she is cleaning the top shelves in the kitchen.Â  Monica now believes she has stolen her bra as well and makes Chandler try to investigate. We find out that Monica is wearing the bra she thinks was stolen and Rachel has the “stolen” pants.Â  The maid rushes out of the apartment and says she is done working for the Bings.

Elsewhere, Phoebe is trying to date Eric (Sean Penn), but he is having a hard time trying to get over Ursula especially because Phoebe looks just like her.Â  Later, Phoebe finds out that Eric has hooked up with Ursula, mistaking her for Phoebe. Phoebe is disgusted and decides to break things off with him. This story very closely resembles the one from the season three episode, “The One with the Jam,” featuring David Arquette.

Monica: You have to do this! We’re in this together!

Chandler: I’m afraid a jury will see it the same way.

Another Friends Thanksgiving episode has topped the list as one of the best episodes of the season. This outing features Brad Pitt, while he was still happily married to Jennifer Aniston.Â  Pitt plays Will, a guy that Monica, Ross, and Rachel went to high school with in the past. Monica has invited him over for Thanksgiving dinner because they were “thin friends.” When he arrives, everyone notices how much weight he has lost. It is love at first site for Phoebe and she proceeds to flirt with Will for the remainder of the episode.Â  Rachel also finds him attractive and does not remember who he was from high school. It then comes to light that Will and Ross were part of a “We Hate Rachel Club.”Â  They spread a rumor that Rachel had both male and female parts to get back at her for being mean to them in high school.Â  Rachel is very upset, but Monica reminds her that she made up a rumor that Ross made out with their 50-year-old librarian.Â  However, that actually happened and Rachel walked in on them going at it behind the card catalog.

During the day, Phoebe discovers that Chandler is pretend watching football because he does not want to help prepare the food. Phoebe decides to get in on this and as a result, she and Chandler play a very small part in this episode. And then there is Joey.Â  Monica has announced there was not going to be a turkey for dinner this year. Joey becomes upset and promises to eat the entire thing if Monica prepares it. He ends up wearing Rachel’s maternity pants she got from Phoebe and devours the entire bird.Â  He is completely full.Â  That is until he sees there is pie for dessert.

Chandler: When you were in high school you made out with a 50-year-old woman?

What was your favorite episode from the eighth season of Friends? Let us know in the comments section below.