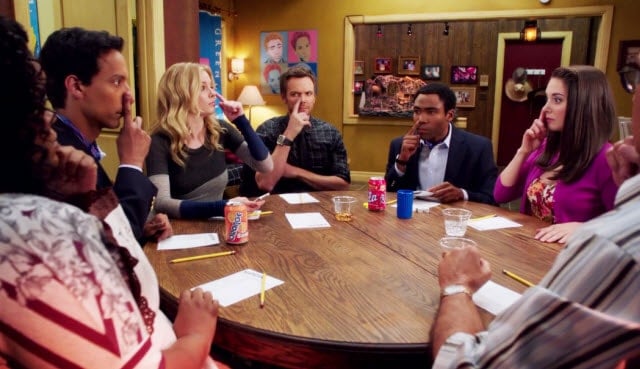 Community appeared at a time when it was easy to lose hope in sitcoms. Comedy shows had all become different versions of the same thing. Like listening to 200 bands all play Stairway to Heaven. It may be a good song, but you get sick of it, real quick. But Community offered something very different: the idea of a non-stop barrage of jokes buried within running jokes and pop culture references.

The only show that was anything similar was Arrested Development (and these two shows would go on to make little nods to one another for that exact reason), which are two shows that I truly believed saved TV comedy in many ways.Â  I thought we could comb over some past episodes of Community that prove it to be one of the greatest comedy shows of all time.

A Fistfull of Paintballs (every paintball episode)

From the brilliant opening shot of the first paintball themed episode, to the Mad Max jokes made in later ones, Community was at its absolute best when it was at its absolute most ridiculous. The paintball episodes were like some alt world version of the show we had all become accustomed to by this point, and they showed us just how far off the rails this show was willing to go.

But it also showed us how far off the rails it could go and remain awesome.

Would it be fair to say this might be one of the most insanely well-written episodes of any comedy show ever? Yes, it is up there with anything brilliant Seinfeld did (like the backwards episode). The Remedial Chaos Theory episode from season three showed us what WOULD happen had this group fallen into different timelines. It also introduced us to “Dark Abed”. That may sound racist but fans of the show know, that is all about the mustache.

This episode changed the way I looked at who answered the door for the pizza guy forever.

The Dungeons and Dragons Episodes

I could not pick one. It was too hard. The first one, based around the bullying of Fat Neil? Or the Bob Cross episode which focused on a messed up family and did it in typically astute fashion (with hilarious results)? The truth is, both episodes are not only love-letters to fans of the show, but love letters to Dungeons and Dragons and all tabletop nerd games from the 80’s, which makes them extra awesome.

When pop culture meshed with Community, only magic thing happened. In the case of these episodes, we mean literally.

When shows go stop-motion for an episode, you know the world is balanced. This season two mind-blower featured the gang in a old-school, clay-mation style Christmas episode that was both nostalgic and very original, all at once. Also, let it be known that Starburns from the show has quite a bit to do with the actual stop motion from these episodes.

Also known as the Halloween episode from the first season. This is the episode where Abed was Batman, and Jeff blew off Annie’s party, only to show up later and save Peirce who ate LSD to be cool and ended up freaking out because he realized he was old. It was the first time the characters really felt like the characters they would go on to become, and it was for many, including myself, the moment we fell in love with this fantastic show.

This is where I say it’s “streets ahead” and you all laugh. For Community fans, that joke will never die.