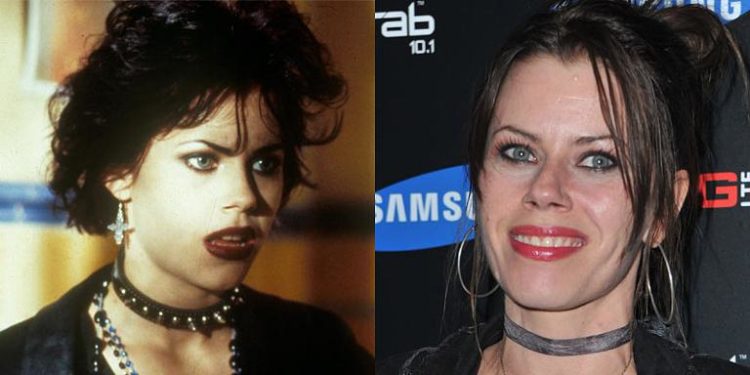 For quite a while Fairuza Balk was known as one of the ‘bad girls’ of Hollywood and the label stuck for a long time. It’s not so much that she’s done anything wrong and it’s not because of a poor attitude, it’s simply a reflection of the many roles she’s taken on during her time in the spotlight. If you recall she actually played the part of Dorothy Gale in Return to Oz. The fact that she usually looks so intense though is a big part of why she’s had the label affixed to her for so long, though as she’s gotten older she has definitely taken on different roles and been seen as someone slightly different than she was in earlier movies. But back in the day she was the kind of woman many men looked at and figured would be something of a hellion largely because she donned the dark makeup and had a very wild look to her. As you can see these days though that act did allow her career to blossom for quite a while.

5. The Island of Dr. Moreau

Now before you roll your eyes and proclaim that this movie was a walking dumpster fire in just about every version it’s ever been made in, which it is unfortunately, the idea of it still raises a lot of moral implications that are quite interesting when it comes to thinking about the story in general. Fairuza’s part as the only real human-looking child of the deranged Dr. Moreau was downplayed quite a bit but she did her best to make it work in a movie that was already doomed from the start. In fact if not for her, Val Kilmer and yes, even David Thewliss, this movie would have been just as obscure as the island was supposed to be in the movie.

She played a small but important role in this movie since it was her character, Sapphire, that finally got Russell to realize he’d been something of a prick to William and needed to make amends. It’s definitely one thing for a journalist to lose their integrity and side with the subject of their piece over anyone else, but it’s another thing for those that are being protected by the same journalist to turn on that person and sell them down the river. In the world of journalism there is such a thing as morality and those that practice it are sometimes vilified by just about everyone, even when they try to do the right thing.

Vicki is borderline psychotic, there’s no other way to say it, but as a character in this movie she’s absolutely perfect since she has nothing but love for Bobby and a great deal of faith that he can be someone special. The fact that she’s way over the top in her methods and her behavior is kind of forgiven since she is a crucial part of Bobby Bouchet’s eventual development into a man and at least part of the reason why his mother comes to understand why he wants to belong to the world in a much bigger way. In her own manner Vicki turned out to be the catalyst of something that made this movie work.

Sometimes it takes a monumental shift in one’s ideals to really change who they are and who they want to be. Derek had to undergo a radical change to his way of thinking to realize that the life he was leading wasn’t what he needed. But his girlfriend Stacey was simply in too deep like many of those that had fallen under Cameron’s sway, and couldn’t accept that the man they’d looked up to for so long, Derek, had changed his mind when it came to his worldview. In fact Stacey was one of those calling for Derek’s death shortly before he wrested the gun that his old friend Seth had brandished, turning on him in a way that offered little to no explanation and really didn’t need any.

Out of all the young women in this group Nancy was the most tragic of the bunch since she simply couldn’t think of another way around her life predicament. Her mother was too wrapped up in her own life and she had no one to turn to for a positive influence. But with the desire for power running unchecked and the influence she held over her friends rarely ever questioned, gaining even a little bit of power was a huge negative in her life since it seemed to absolve Nancy of all morality when it came to her actions. Thankfully Sarah turned out to be a naturally gifted witch and was able to defeat Nancy pretty soundly.

She’s played the bad girl for a number of years, but you have to admit she’s quite good at what she does.