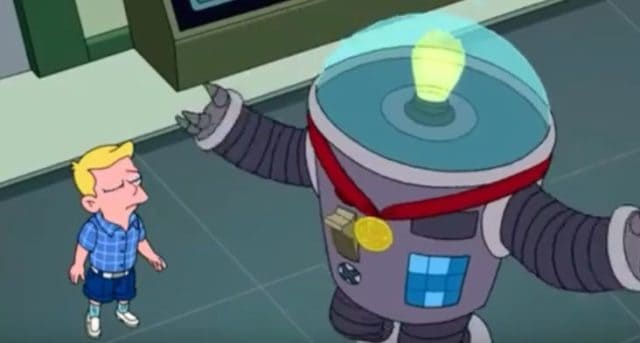 While many see Futurama as a “spinoff” of sorts to The Simpsons or even a “copy” those are the many that clearly didn’t follow the show.Â  Futurama had its own set of fans and its own set of hilarious obscure pop culture references that would even rival what The Simpsons does.Â  One of their best body of works is their “Scary Door” segment.Â  According to the Futurama Wiki”

The Scary Door is a science-fiction horror television program in the 31st century. It is a spoof of the classic science-fiction TV series The Twilight Zone, and references several other TV shows and films, including the ending of War of the Worlds. Seven episodes of The Scary Door have so far been seen in Futurama media.

While some episodes clearly are references to specific episodes of The Twilight Zone (for example Last Man on Earth, which has almost the exact story as Time Enough At Last but takes it a bit further in irony), others are less specific.

If you’re interested in what are some of the best “show within a show” moments on Futurama, then look no further than this Scary Door compilation.