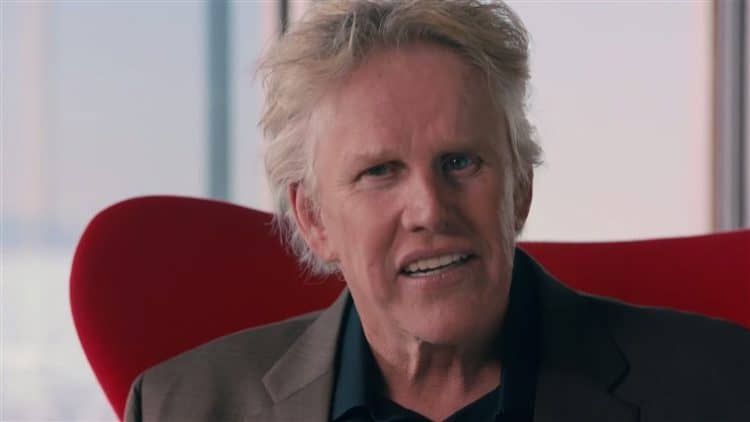 A lot of times you look at Gary Busey and see nothing but teeth and a whole lot of crazy, especially if you haven’t seen him prior to his motorcycle accident in the late 80s. As much fun as he is to watch in any given movie you also get the sense that whatever brain damage incurred has had lasting effects that are changing his behavior gradually over time. Thankfully that hasn’t really affected his acting all that much but it has made him seem a little more eccentric than others and has been off-putting to some since he can act like a bit of a nut every now and again. When he puts that kind of energy into his movie roles though he becomes someone you can’t and don’t want to forget since the level of crazy he can go to is nothing short of great for just about any role he plays. Gary can still take on serious roles as well, but age and whatever damage there might be to his brain are starting to wear him down it might seem. That smile though, when it goes ear to ear you can’t help but think that it’s time to be entertained and possibly wonder what in the hell is coming next.

Simon Brew from Den of Geek! issued an interesting reminder that Jason Patric was picked first for the lead role in this movie, not Tom Cruise. That might have made things a little different since Cruise and Patric do have very different acting styles. Busey plays a decent role in this movie but it’s not bound to last since you can imagine that a firm that’s willing to just up and kill people, even its own members, isn’t going to think twice about sending their contracted killer to take care of a pesky private detective. In a way his role is pretty expendable in this movie since it’s set up just to take him out of the equation and offer little if any real development. But something about seeing him on screen is still great no matter what.

It’s not hard to see how a person’s legend could eventually mask the reality of their lives as Chet Flippo of Rolling Stone seems to be talking about, especially when you hear that here’s no authoritative biography on Buddy Holly that could be called THE truth. Sometimes it would seem that stars get so big that they simply can’t live up to their own hype, but few people that aren’t so close as to know the whole story will ever dispute it. The idea of Buddy Holly being the person that was shown in the movie is kind of ludicrous since Hollywood is well known for spinning a story to their liking, but it’d be nice to know that there was something truth behind it.

This was just pure entertainment, the type of action that people were wanting since at this point Mel Gibson was still insanely popular and Gary Busey wasn’t quite as well known to everyone, even though it was obvious that he could play a convincing bad guy. That dead-eyed stare that promised mayhem, the fact that he took orders like a loyal but psychotic soldier, and of course the realization that out of everyone in the movie he was the only one that could take on Riggs in a hand to hand brawl and look as though he might come out on top. His death was kind of a letdown at the end since it seemed like less than was deserved, but the fight was still entertaining.

This movie really doesn’t get enough credit since it’s arguably one of the best movies that was released during its time and yet it was buried beneath a bunch of others that were decent to good to subpar when it comes to overall story lines. Someone actually called the chase scene less than impressive, but in truth when you think about it, a person that’s out of shape, disoriented, has no idea where he’s at, and has no experience in the woods against a team of seasoned hunters seems like he shouldn’t have a chance in hell of getting out alive. But then it’s not wise to underestimate a man that’s got nothing to lose.

“Utah! Get me two!” It’s such a normal and mundane line, but it stands out among the many others in the movie since Busey’s character is someone that is kind of a joke to the rest of the FBI since he doesn’t always respect authority and likes to do things his own way. But he does get results, sometimes, and he is after one of the most dangerous group of criminals in the Dead Presidents, a group of surfers that knock over banks and then disappear until the following summer. As movies go a lot of people might quibble about how popular this one really is, but throughout the years it’s still been held up as one of the best.

He does look like a crazy older uncle, but he’s still fun to watch.