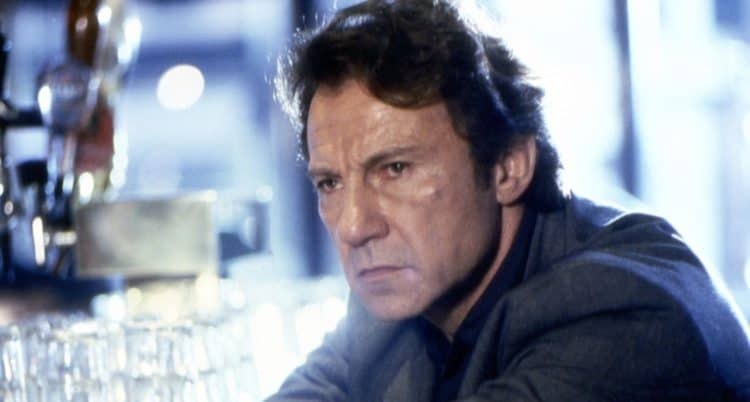 Anytime you see Harvey Keitel it used to seem that the movie was about to get rough, raw, and in some way even better because of it. Harvey is that hard-nosed guy that might not be the biggest action star in the world but is just gruff and tough enough that you’d think twice before messing with him since in the movies he might pull a gun and end the discussion quickly. When it comes to comedies, dramas, and action movies he’s one of the best and has been for a long time. Now that he’s in his 80s it’s understandable that he can’t do as much, but at the same time it’s worth the effort of digging up his old movies to enjoy each and every one of them since back in the day he was one of the toughest guys around. His career has been one of the highlights of the movie industry no matter how many have flown under the radar since he’s the kind of actor that a lot of us grew up with and can still recognize as one of the best.

Seeing him as a stereotypical pimp in Taxi Driver was kind of different since it put him in a role that a lot of people didn’t really expect. But since the idea is, or was, that a pimp was supposed to be tough and able to take care of his women, this seems to pan out just a bit. But still, seeing him in this kind of role had to be kind of difficult if you grew up first seeing him as the tough guy in a lot of other movies. Going back to this film was something that was a big eye-opener for a lot of fans no doubt, but thankfully he played the role out without much trouble and did it so well that by the end you were actually rooting for Travis.

If you’re wondering how bad a guy can get before he’s past redemption this might be it since the lieutenant is one of the worst offenders in the movie, and that’s pitting him against two guys that rape a nun using a crucifix. In the end he actually catches the guys and ends up smoking crack with them before letting them go seemingly as some kind of penance. Considering that the nun they attacked already forgave them and moved on one would think that this was his redemption, but if so it comes with the consequence of betting too heavily on a team that continued to lose since his gambling mistakes caught up to him in the end.

Mr. White is a criminal, there’s no other way to say it. He talks like a criminal, he moves like a criminal, and despite the fact that he sounds like a nice guy he’s still the type that will likely rob a place and shoot it out with anyone that gets in his way. Plus, the idea of torture doesn’t sound like it’s beneath him, but again, unlike a couple of his other associates he might not go that far unless he absolutely has to. In truth he’s on this heist out of loyalty to the boss and because he needs a score. Unfortunately the guy he vouches for on the crew ends up costing him everything, including an old friend and his own life.

It’s not too hard to see Harvey as the level-headed guy since he seems to take it in stride more often than not, but watching Robert De Niro’s character kind of self-destruct as he actually insults and then threatens a loan shark makes it obvious that the two of them won’t be walking away eventually. The end that can come from the mean streets in some cities is inevitable at times since all it takes sometimes is to insult the wrong person. Despite his desire to do something different with his live Charlie can’t help but try to help his out of control friend, even to his detriment and near demise.

All you’ve got to do is call the Wolf and things will get taken care of in a jiffy. Of course it doesn’t help that Vincent has to run his mouth a bit before things can get done, but hey, the Wolf seems more than willing to accommodate in his own gruff manner. This is the kind of character that you don’t mess with, and not so much out of fear of what he might do to you, but because he’s just that cool of a guy and he’s all about getting in, getting the job done, and then getting the hell out again. Now that’s a cool cat.

Harvey was the man in his day.