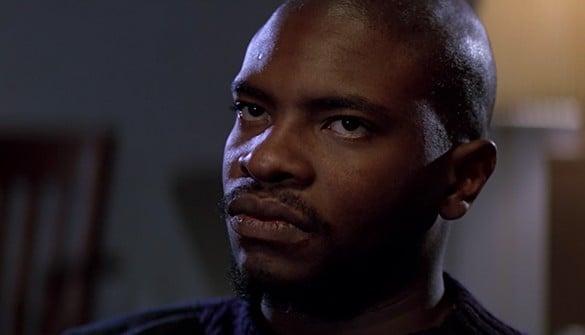 When talking about Keith David it’s kind of hard to really say which are his best movies and which aren’t. But in truth those that are his best are those that he’s featured most prominently in since he’s the kind of actor that you love to see since he’s a solid presence that bolsters any production and can make even a weak actor look just a little stronger thanks to his support. Throughout the years he’s taken on many different characters and rocked all of them since it doesn’t matter that he has a very common persona that gets plugged into each character, he still manages to keep each one different than the last in a way that’s hard to fully describe but is still great enough to be noticed since he never gets old with what he does. He can play sinister, warm and caring, or just hard and tough to get along with, but any persona he takes on is something that is going to be remembered in whatever movie he shows up in.

Those pesky aliens that just can’t stop with the subliminal messages make for kind of a campy movie, but at the same time it’s still one that ended up becoming a cult classic thanks to Roddy Piper and of course Keith’s role in stopping the signal that’s keeping humanity unaware of the aliens’ existence. They go through a great deal to get to the transmitter that’s broadcasting the signal that’s keeping the aliens hidden, but when Frank is murdered Nada continues on and finally destroys the station, thereby alerting humanity to the very real presence in their midst and the message that’s being conveyed to them.

4. There’s Something About Mary

You might never see franks and beans in the same light again after this scene since Ted has a little mishap when he’s hurriedly zipping up his fly and, well, creates one of the most iconic scenes in movie history. The fact that Keith’s character has to be the first to see it is just a small part of what leads up to the funniest line in the movie since Warren, Mary’s mentally challenged brother, picks up on the idea of ‘franks and beans’ without any hesitation. Poor Ted, the guy really didn’t stand a chance as a teenager and in his adult years it seemed to haunt him relentlessly since you can imagine how this would ruin your reputation in school.

One guy has seen too much trouble to go getting himself into the middle of it again, while one guy has been seeing it too much as it continues to move into his town. Seagal plays the usual tough guy that doesn’t want to get involved while David is the teacher and coach that’s tired of seeing the drug trade take over his town. Together they finally come together to take the fight to the drug dealers and end up starting a war that is finally noticed by the head man that sees fit to take it out on the family of Seagal’s character, creating a very tense and maddening situation that doesn’t usually bode well for the bad guy.

Say what you want about this movie but it was and still is a classic since it’s not a big blockbuster, it’s not a deep-thinking type of movie, and it’s certainly not something that was bound to win awards. If movies could be described in the same way as comfort food, this would be it since quite honestly this movie is funny enough to warrant such a description and is addictive enough to be counted as something you might like to watch when you’re feeling nostalgic about the past. Emilio and Charlie play a great duo that’s only made even more impressive by Keith when he finally steps in.

This final scene of The Thing had a lot of people wondering just what happened when the fires finally burned down. After all, the two men are stuck out in the middle of a frozen wasteland with no expectation of a rescue and nothing that could possibly help them survive for more than night at best. Some might want to argue that they could have made it, that perhaps someone was close enough to notice an entire station blowing up, but given how everything developed on the station and how it seems that the Thing might not have been completely destroyed, it’s fair to say that the men didn’t survive, and it was one of the best possible endings that could have been devised.

This guy is intense and it’s great since he never seems to feel the need to soften his tone or bring it down, and it works out for the best in every movie.