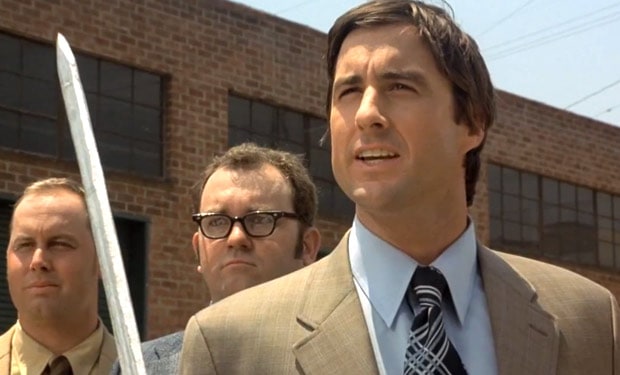 When you think about Luke Wilson your mind might actually go back to just a few movies unless you’re a big fan and have seen them all. But unlike his brother Owen he’s not quite as comedic in his performances and he does tend to perform in more serious and dramatic roles on a regular basis, though the great thing is that he can do comedy and hang in there with everyone else. In a way he’s the cool, composed individual that doesn’t get too crazy and rarely, if ever, goes over the top the way some of his costars do since he’s just a cool customer that can be funny or serious depending on the situation. It’s fair to say though when he has a supporting cast around him that’s capable of bolstering him or at least highlighting his part, however short it might be, he shines no matter what part he’s playing.

Here are the five best movies of Luke’s career in our opinion.

Does anyone remember the days when the internet was still an invention that most people had no understanding of and thought might be just a fad that would pass on and be gone sooner or later? Well look where we’re at now, and think about all that had to come come before in an effort to get this far. It wasn’t all good at the beginning since the images, the videos, and the information that people wanted RIGHT NOW because some folks figured they could get it to them still wasn’t perfect. But when people figured out they could get rich by sharing said images and cut out those that were producing them, yeah, you could say there were a few problems. When money is involved, problems are a dark cloud just waiting to happen.

Let’s just say it, introducing your girlfriend/fiance to your entire family is kind of awkward sometimes, perhaps even the last thing you want to do since you have a pretty good idea of how it’s going to go, bad. Needless to say in this movie there’s really nothing that seems to go right for the longest time even when things seem to be on an even keel since the family isn’t the most cohesive, as a lot of families aren’t, but it’s also apparent that the couple we’re introduced to aren’t really meant for each other after a while and the overlying situation of the mother being sick kind of complicates and then somehow simplifies everything.

3. Anchorman: The Legend of Ron Burgundy

It’s kind of a thankful occurrence that he’s only in this movie for a short period of time since despite what others might say this was kind of a hard movie to get into at first since it’s dominated by Will Farrell, who, sorry to say, isn’t always that successful in driving his own movies without a lot of help. But the bloodbath that is the showdown between the news channels is great since it enlists some of the top talents within Hollywood and creates such great, fictional backgrounds that at the time were quite prominent and were easily at odds with one another when it came to the ratings. Apart from the bloodshed, who else would love to see the media solve things this way?

Being talented, rich, and popular doesn’t really make for a stable life when your home life is anything but satisfying. The kids in this movie were gifted in a way that was unprecedented since honestly they did things at an age when most of us are still thinking about what kind of clothes we’re going to be wearing the next day that won’t be mocked by our friends. But upon growing up the issues they developed as kids only worsened, especially when it became obvious that their father was a big part of the problem being as he didn’t really connect with them and, as a result, didn’t really know them all that well.

Hands down this is one of the best college movies ever made, and that’s saying a lot since Van Wilder and the holy grail of college movies, Animal House, have yet to be topped by anything that’s come after. When Mitch has to find another home thanks to his cheating girlfriend he ends up buying a home near a college campus whereupon his friends Beanie and Frank decide to throw a party to get Mitch back into the swing of things. After sleeping with his boss’s daughter, not knowing who she was, and then becoming the head of a fraternity after being threatened with being kicked out of his home, Mitch and the guys take charge of his life and create something that’s not only hilarious, but definitely an idea that can be labeled as inspiring.