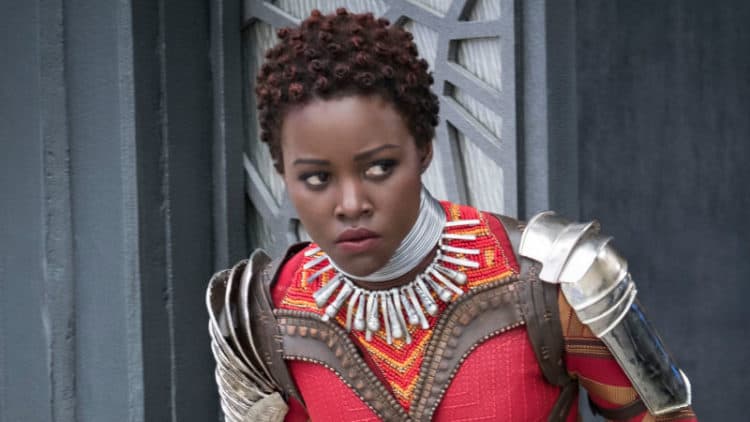 Lupita Nyong’o has been in show business longer than some people seem to think but in the past several years her career has really taken off with a few of the movies she’s taken on and as a result a lot of people seem to think that she might be a newcomer. That’s not the case but it’s not bad to let people think that she’s just now coming into her own since she’s been out there, just not in a huge way as she is now. With the advent of some of the movies that she’s been seen to star in there’s a good idea that she’ll continue to grow her reputation as one role after another begins to come her way. You can’t help but think that she’s been earning everything she has coming at this point and is only getting better with each new role that she takes on. She’s definitely one of those that you can’t help but want to see in more movies as she moves forward and upward.

The part of Maz Kanata is a quirky one that a lot of people either liked or didn’t understand. It’s easy enough when you really get into the idea of who she is, what she does, and that she’s been around for a while. The fact that she happens to like Han and Chewbacca is a big point in her favor since anyone who happens to like the roguish pair tend to be okay. But she more than proves this in her dealing with Rey and the lightsaber that seems to call to the burgeoning Force-user. Maz is the type of character that knows a lot more than she’ll tell at times but will at the very least guide a person down the right path.

Bilge Ebiri of Vulture didn’t seem to have much to say when it came to commenting in a positive manner on this movie, but honestly it seems quirky enough to work. The idea of a group of kids being hemmed in and trapped in a gift shop on a farm should be horrifying, but this movie pushes the comedy so hard that it seems better to laugh or just stay quiet and watch. It’s not a horrible movie really but it might make you smile in a guilty fashion since there’s something so satisfying about watching Josh Gad become the jerk that he seems born to be sometimes in the movies. Yes, the voice of Olaf can play the part of a creep.

As Noah Berlatsky of The Atlantic makes it painfully obvious, there are times when history is either fudged on purpose or by accident to show what the horror of racism was really like back in the day. The funny thing, yes funny in a strange not haha kind of way, is that people these days have no idea of the hardship that their ancestors really faced when they decide to compare their own lives to what happened in those early days. This kind of story is that which makes you glad that we live in a world where, despite their continued presence, racism and prejudice are being openly condemned, not simply accepted as a part of life.

Jordan Peele is doing a great job of scaring the living hell out of everyone so far as he continues to roll along in his career and make movies that are bound to be seen as some of the scariest and most mind-bending movies of the era. Despite any comments he’s made that weren’t meant to offend anyone, basically saying he can’t see casting a white male lead, he’s still a great storyteller and is able to get us all going with a good jump scare that leads us into a story we weren’t prepared for. Say what you want, but he’s being as original as he can be and so far he’s been killing it and will hopefully continue to do so.

There’s plenty of criticism about this movie since technically it wasn’t the first black superhero movie on the big screen and it wasn’t even Marvel’s first black character on the big screen. It was a great action movie without a doubt but it was also something that seemed to get hyped up just a bit too much for its own good. Black Panther was the first black superhero and that’s worth a lot, but it’s also another instance in which he’s a nearly unbeatable opponent either because of power or intellect or a combination of both. He’s great, and those that stand with him are highly trained, so it worked as an action movie.

Hopefully her career only keeps going up.