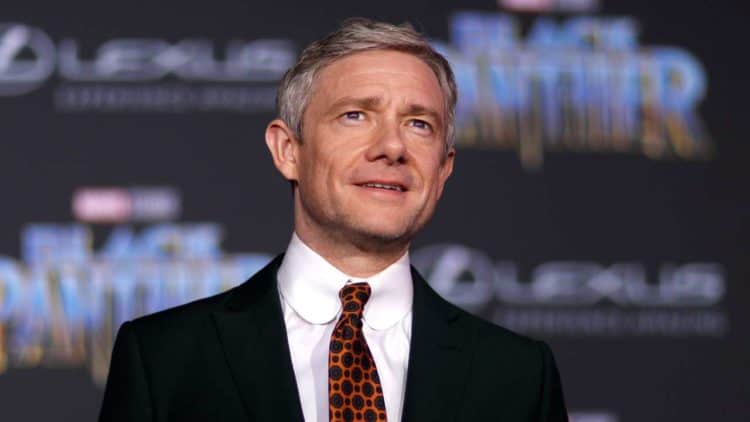 Martin Freeman has been around for a good deal longer than a lot of people realize. It’s the fact that he’s been noticed more and more overseas that’s been helping his career since his move into the mainstream really helped him out when it came to being noticed. In his native country he’s a huge star, and around the world he’s become very well known throughout the years. His ability to play characters that are seemingly weak but carry a very big presence, an inner strength that can’t always be seen, is almost legendary at this point since when you look at him, Martin really doesn’t seem like much, maybe like a guy that might be good at drama and little else. But he’s shown throughout the years that he has a lot more to offer and has been able to show an adventurous side that has entertained a great number of people.

5. The Hitchhiker’s Guide to the Galaxy

Shamini Bundell of Nature makes a good point when she mentions that this story spent several decades just waiting for someone to come along and make it into a memorable movie. Arthur is an unfortunate but moderate human being that lives alone, has few friends, and is basically the average kind of guy that’s just trying to get through life one day at a time. When his planet is blown up to make way for an interstellar highway however he has to adjust to the idea that he now has no home, is adrift in space with a group that is made up of some very interesting but in some cases disturbing individuals, one in particular that he’s quite taken with.

Anyone ever had that friend that just refused to grow up? This movie is basically an attempted return to the greatest night of one man’s life, and unfortunately that man attempts to drag his old buddies with him in an epic run through their childhood home to obtain a pint from every bar within the town of Newton Haven. The only problem is that Newton Haven has been taken over by the Network, an alien species that seeks to replace humanity and usher them into a new era where compliance is required and anyone that doesn’t toe the line becomes replaced by a ‘blank’ as their original body is mulched and used as fertilizer.

Jamil Smith of Time makes a good point that black heroes have been around for much longer than T’Challa when it comes to being on screen. Lando Calrissian, Blade, and many other heroic black men and women have graced the big screen before this movie was ever a concept. But because it was in the MCU, and because of the era in which it was created, this movie became something of a massive hit to many, while others tended to roll their eyes and wished that those individuals would expand their vision just a bit. It was a good action movie without any doubt, but thinking that it was worth the amount of hype it got was a bit difficult.

You might think that zombie movies would all come with the kind of morals and ethical quandaries that Luke Buckmaster of The Guardian speaks of regarding this movie, but a lot of them tend to be all about the shock value, horror, and of course the flesh-eating hordes that seem to appear out of nowhere. Freeman has a duty to his dead wife and their child however to make sure that before he turns he finds a safe place in which his child can grow up. It’s kind of hard to think of safety in a world that’s been gripped by a virus that turns people into flesh-eating, soulless creatures that kill whatever they see as food, but the movie does manage to raise a good number of moral issues.

1. The Hobbit: The Desolation of Smaug

You might thing that An Unexpected Journey would be the best of the Hobbit movies since it re-introduced us to Bilbo and his calm and quiet world in the Shire, but the grit and determination felt in this movie is a little more convincing since it speaks to the changes that have come over Bilbo since the first movie and the investment he’s put into the group he’s traveling with. He and the dwarves have little in common, but at this point he’d already proven that he could be quite useful and even ingratiated himself to the dour party he’d taken up with. Kind of like the Two Towers of Lord of the Rings, this movie establishes a very firm center to the story, and ends on a note that is nothing less than tragic when Smaug is awakened.

He’s got a lot of years left to him hopefully, since his contributions have been greatly appreciated.