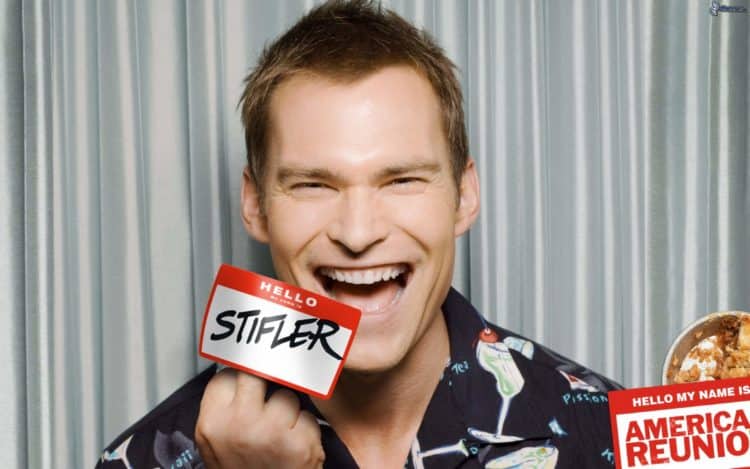 A lot of people seem to get locked into one particular role and never seem to get out, and Sean William Scott is that kind of guy since no matter how much else he’s done in his life, and he’s done a few movies that have been far and away from the one character that people remember him as, he just can’t seem to catch a break. As Stifler he was absolute comedy gold since he’s the jerk you love to hate and can’t get enough of at the same time, but as anyone else it almost seem as though the ghost of Stifler is hanging over his head constantly and reminding people that he’s funniest when he’s being an absolute jerk, moron, and all-around doofus. He’s shown throughout his career that he can do more but for some reason a lot of people haven’t really given him the chance he needs to show that Stifler is a great character but it’s not all he’s capable of.

If you don’t know much about hockey it doesn’t really matter with this movie since the whole premise is that Doug “the Thug” Glatt is someone that’s brought in to serve as an enforcer, he’s not really there to skate or even handle the puck. Eventually he ends up doing both however since as part of the team he needs to be able to do more than just hit other guys. But throughout much of the movie Doug is more or less the nice guy that can bang but is so down on his luck that it’s kind of pathetic. He has a lot to offer in his own certain way but is hampered by the fact that he’s not all that smart and is a little naive on top of it.

This is more or less one of those movies that a lot of people can relate to after going to college and hanging out with friends that are bound to get them into trouble one way or another. On a quest to retrieve a videotape of him and Beth having sex that was supposed to be a videotape of him speaking to Tiffany, Josh and his friends get into all kinds of trouble that some of us might think is entirely outlandish but isn’t too far off the mark when you hear about certain stories that some college kids talk about. In essence it’s about doing stupid things for the right reasons but somehow getting your wires crossed while things still come out the way they should somehow.

This was definitely one of his funnier movies since he and Dwayne Johnson meshed in a way that was perfect. Travis is a former PhD candidate that’s off searching for a lost treasure even as Beck has been hired to bring him home as part of a job that will get him out of the bounty hunting life and into his new life as a chef. The adventure the two go on when Travis proves reluctant to go back however is nothing short of hilarious since Beck, a city-loving tough guy that can’t stand being in the jungle, has to deal with baboons, freedom fighters, and treachery on a level that he wasn’t even close to prepared for.

Paul Rudd and Sean William Scott are about the last two guys you’d ever want kids seeing as role models in this movie but given the fact that they’re both looking a jail time unless they volunteer at Sturdy Wings, a kind of big brother/sister program to kids that need attention, they quickly take the option no matter how much they hate it. Unfortunately for Wheeler, played by Scott, he gets a young black boy named Ronnie that’s great at acting tough and pushing people away, but is deep down another kid that really needs a father figure that won’t let him down in life. By the end however Wheeler and Danny manage to realize just what’s really important and come to enjoy being role models, in their own way.

Scott Tobias of The Guardian echoes the sentiment that a lot of people agree with by stating that this movie could never be made the same way in this day and age. It’s true since there are several instances in which people would likely riot and picket the theaters for the same images that are being shown in the original movie. Stifler alone is one of the most obnoxious and over the top characters in this movie since he’s fully aware that he’s a jerk and doesn’t care and he’s bound and determined to make at least one person’s life a living hell as much as he can.

He’s much more than the Stiff-meister, that’s for certain.