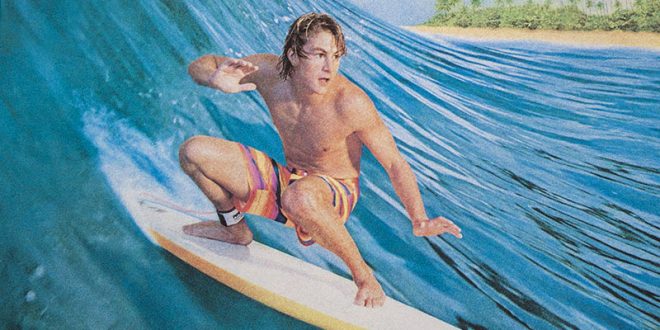 There’s something inherently zen about surfing, though it’s also a serious adrenaline rush at the same time. The movies that we watch having to do with surfing definitely show us some intense and impressive moments, no matter that sometimes the actors that are supposedly on the board have been replaced with professionals and are viewed from a distance. That doesn’t matter really since watching these movies makes the average person feel as though they might want to run out, buy a board, and try their hand at riding the waves. Of course the average person might find themselves crashing into the surf in the next instant since surfing does take a great amount of skill and experience to really enjoy it. That being the case, watching the movies tends to be one of the best ways to enjoy the sport.

Here are some of the best surfing movies to be found.

This movie is a documentary made by Dana Brown, the son of famed surfer Bruce Brown, and it goes into great detail about the sport of surfing, what it means to those that do it, and even the inherent dangers that come along from time to time. From one beach to another the sport of surfing has been evolving over the years in a way that has been impressive to watch and seems to have continued to push the envelope. People continue to try and find new and innovative ways to revolutionize the sport, but thankfully much of it has stayed the same since it began, much to the delight of the fans.

Taylor Ferber from Bustle covered the idea that this movie was more authentic than a lot of surfing movies since not only did the cast pull their own weight, but the risk was very real as a pro surfer actually got caught on camera with an authentic injury. Obviously that part wasn’t scripted or wonderful at all but it went a long way towards showing that surfing can be an impressive sport to watch but the result of taking on such monstrous waves as were seen in this movie. The point of the movie was well-received as it was shown that it doesn’t matter if you’re a man or a woman, the joy of surfing is something anyone can do if they really try.

It’s a common understanding that you need two arms to surf, as mechanically it’s the best advantage that a surfer could hope for. But when Bethany loses an arm to a shark attack it’s an obvious impediment until she learns how to overcome this disadvantage. By getting back out in the water and helping others to overcome the same fear she finally reconnects with the ability she has to sense the big waves coming, and gets back in the water to tremendous results. It might be favorable to surf with two working arms, but an amputated spirit is even more damaging to a surfer as it prevents them from ever experiencing the love they have for the sport.

Just imagine what it would be like to follow the summer along the different hemispheres of the world, creating an endless opportunity to ride the waves and experience the absolute joy and thrill of the surf as it continued to pound towards the shore. Bruce Brown had been surfing since the 1950s and had the idea to film the sport to show people just what it was all about and what the draw of it was that attracted so many people. You can imagine that his film eventually served as an inspiration for a great many people be they surfers or not, as it detailed a moment in time when a person could find the ultimate ride by dint of seeking to prolong the season as long as possible.

There’s a big difference in surfing a wave tank versus surfing the open waves and Rick finds that out quickly when he makes his way to Honolulu and wipes out in tremendous fashion. Throughout the movie however he gets the impression and finally the point that real surfing isn’t about dominating the waves or becoming the best. It’s about so much more than just getting up on the board, it’s about something that takes a great deal of time to understand and fully appreciate. Surfing is something that only those who truly feel it could possibly tell you about, though thankfully Rick gets the point by the end of the movie.

This has to go down in history as one of the greatest surfing movies ever made since it combined two of the greatest acting talents and a story that was fairly simple but still created a very big buzz when it came to the fans. Some people might want to disagree, but those might be the folks that think that the remake was edgier and more well-rounded. Swayze and Reeves created a movie that was all about the zen of surfing but at the same time combined the ultimate rush of adrenaline that Bodhi and his crew couldn’t do without. They were the types that believed that even living on the edge was taking up too much space as their antics and their activities created an epic movie that’s hard to talk down.

Surfing is definitely a sport that one has to experience firsthand to truly understand, but just watching it becomes enjoyable as well with the right movie.