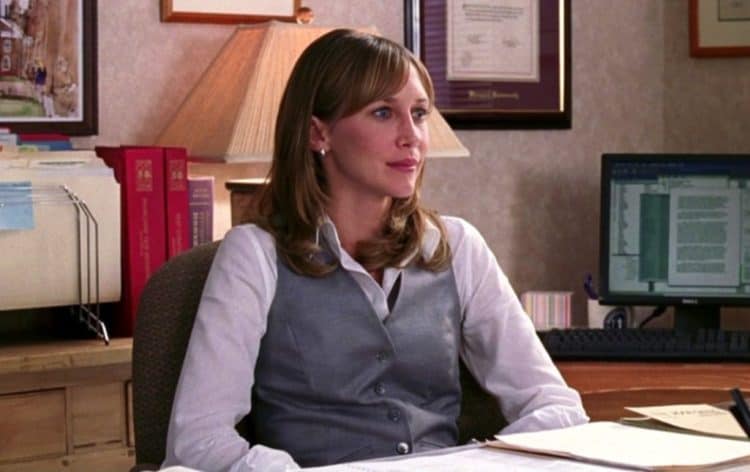 Vera Farmiga is an actress that one can often get confused with a couple of other actresses simply because at a glance they do look alike. The acting style she comes up with is all her own however and it becomes easy to distinguish her then since she has a very emotional style that’s hard to miss and it comes out in just about every one of her movies. What’s great about it though is that this style is multi-layered and doesn’t just have one setting. She can be sensitive through and through but she can be tough, calculating, she can dull down the level of intelligence she seems to have or she can seem absolutely brilliant, a fact that gives her a lot of clout in Hollywood because she’s able to do so much while changing very little when it comes to each role. In a big way she manages to be the same person in a lot of movies but altered just enough to be a completely different individual.

Vera plays more of a complimentary support role in this movie as she takes on the role of an ex-girlfriend that helps Hank to sort out the mess between his stern, ailing father when he comes home for the funeral of his mother. Despite trying to leave again Hank is called back when his father is suspected of murder, but the problem is that thanks to his cancer treatments the judge can’t remember anything. When all is said and done Hank and his father finally make peace and the judge gets to pass away shortly after. It’s a very touching story that should be watched at least once since there are likely many people that can relate to at least one part.

Since the Conjuring movies came out Ed and Lorraine Warren have been called experts and they’ve been called frauds, but the one thing that seems to be agreed upon is that they were big names when it came to the paranormal events that they were said to have witnessed. No one knows for certain just what happened during each case, apart from the individuals that were living in the supposedly haunted homes, but there are still a lot of questions to be answered to this day. One thing is very certain though, and that’s the fact that the Conjuring movies have gone down in history thus far as some of the scariest movies made.

On the list of disturbing movies this one has to be up there in the top twenty at least since the content is at times so realistic and so forward that one can’t help but think that the characters might be mirroring people that live right down the block, depending on where a person lives. But when an undercover cop is told by the son of his mob boss to get rid of a weapon that’s been implicated in the murder of another officer the simple little gun becomes the focus and the cause of a lot of troubles throughout the movie. Not only does his son’s friend find it, but eventually it nearly destroys his family as his boss’s ties with the Russian mafia come crashing down on top of him.

Believe it or not there are people that spend more time in the air than they do on the ground as it’s part of their job and therefore a lifestyle that they’ve selected. Ryan has one of the oddest jobs you could ever imagine, which is to fire people on the behalf of corporations that don’t want to do themselves. It’s a very impersonal and lonely job that doesn’t win him a lot of friends, but he seems to be content with it. Once he meets someone that he finally connects with though the irony is that he can’t keep her around since eventually she finds out that she’s married, has kids, and that he’s her escape from the normal life she’s created.

As a cop movie this one is just kind of insane since a lot of people might think they have a firm handle on who’s who and who’s working for who, but by the end you might be wondering just how you missed certain plot points that might have clued you in to what was really going to happen. The ironic part is that as many rats as there are in the mob and in the police force it’s a wonder just who is lying and who is really telling the truth. Vera’s role however stands outside this mess as she hooks up with one detective that is an informant for the mob, and a member of the mob that’s an informant for the cops. Oh yeah, it’s complicated. James Hibbard of Entertainment Weekly has more to say on this movie.

She’s definitely a joy to watch since she can become just about anyone she needs to.