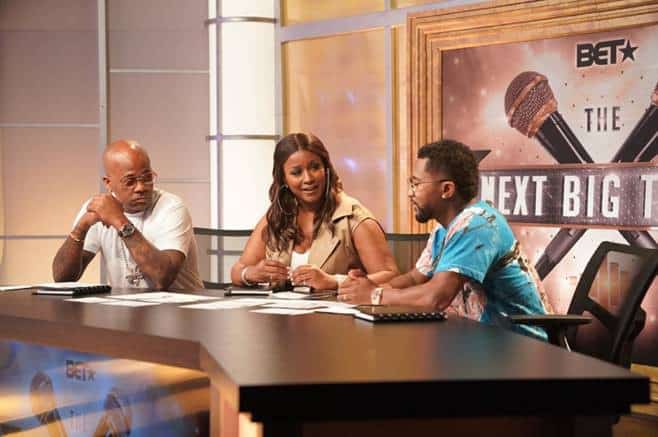 Music competitions have evolved over the years, but there hasn’t really been a breakthrough in that kind of programming since The Voice came out to rival American Idol. BET is taking on the challenge with a new show called The Next Big Thing. The format of the show will be different from what we’ve seen before, and the creators are hopeful that the show will truly produce the next big act in hip-hop and R&B. The Next Big Thing just premiered on BET, so it’s still a relative unknown at this point. Here are 10 things you probably didn’t know about the show.

The Next Big Thing already has big things going for it. For starters, the judges for the show are a team of powerhouse individuals in the music industry. There’s record executive and entrepreneur Dame Dash, who is best known as Roc-A-Fella’s co-founder along with Jay-Z. There’s also Tina Davis, the A & R expert that discovered the likes of Chris Brown. Also, the show has producer Xavier Dotson aka Zaytoven, who’s worked with the likes of Usher, Future, and Gucci Mane. These judges all have the skill and experience to spot musical talent from a mile away.

We’re certainly interested to see Charlamagne The God as host for The Next Big Thing. We’ve seen him on television projects before, and his hosting will add a different dimension to the BET show. Charlamagne’s talents and experience as an actor and producer is fitting for The Next Big Thing, and the aspiring artists coming into the show could really learn a lot from the host. Charlamagne’s role would be to moderate and guide as well as to narrate and present moments and situations on the show.

As mentioned earlier, the format of The Next Big Thing will be different from other music competitions. This show is going to be more of a mentoring show with the overall goal of really seeking out the next big star in the genre. Instead of just seeing the artists on stage, we’ll get a real in-depth look into what goes on backstage and beyond. The work and the amount of people that have to work together in order to have a hit song or hit album or successful musician is difficult to imagine–unless you’ve been there and done that. This is exactly what the League and the mentors are going to offer all the artists coming onto the show.

This show will also feature plenty of established mentors to help the potential stars. It’s absolutely imperative for The Next Big Thing to have the industry’s best musicians as mentors in order for the whole format to work. So far, some of the names on the list of mentors include Keyshia Cole, Jeremih, Remy Ma, Lil Kim, and more. Every single one of those artists has gone through the whole process, and the budding artists can learn so much from each of them.

The artists on the show will have to complete challenges in order to move on. Every single challenge will be a measure of how much work the artists are putting in. Preparation is key to a lot of these challenges. Zaytoven has shared that one of the most difficult challenges that was done on the show involved having the artists create, write out, memorize, and perform a whole song within 24 hours. It may sound easy, but making a good song takes more effort than we all could imagine.

The Next Big Thing went from being an idea into production in just about a month. The idea initially came to Tina Davis, but she’s never had an experience with creating shows previously. So she brought the idea to some industry experts, and within a month or so, there was an entire production team dedicated to getting the idea going. Tina even said that the show had an airdate before filming even began.

Throughout the years, we’ve seen many talented artists cross the stages of various singing competitions. We’ve seen a whole number of people that have won as well. However, there have only been a select few that have found true success by winning a television competition. The Next Big Thing promises that the finale of the show will actually change someone’s life.

The selection process for the show is also unique. Traditionally, thousands upon thousands of artists go through an extensive audition and elimination process before even making it onto the show itself. In The Next Big Thing, the talented artists are actually handpicked for the show. They will go through what’s being called an “artist development boot camp” that’s designed to weed out the weakest of the bunch.

Coming from all over the United States, there are 21 artists selected for the show. It’s going to be survival of the fittest for these artists for the next few coming weeks. There’s a good group of people on the show that come from varied backgrounds. Angie Stone and D’Angelo’s son Michael “Swayvo” Archer is one of the contestants. There’s Young Juve from New Orleans, who thought he was going to become an NBA player. There’s even a personal chef from Cleveland, Ohio–Nihaya Hedge “Lovee”–who hopes to feed her passion for music through this competition. There are rappers, soul singers, Motown revivalists, old school crooners, and more.

There are a lot of recording companies and A & R groups that are taking part of The Next Big Thing. As far as we know, producers and recording companies will get a chance to offer record deals to the artists on the show. As of now, we’re not entirely sure whether that will be the finale deal or if there will be opportunities throughout the show to get a deal. For now, we’re looking forward to hearing some good music and watching lots of talents and opportunities get discovered.