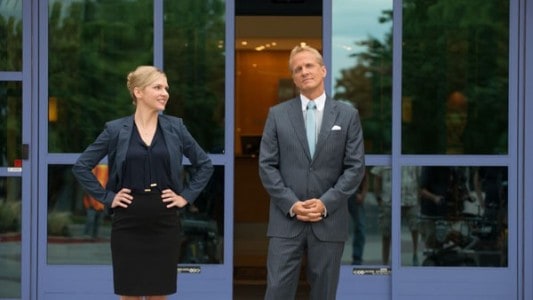 In Better Call Saul,Â Chuck was married, once upon a time. Not too long ago; just a few years. Her name was Rebecca, and she played the violin, and she was an excellent cook. She’s also warm, and inviting, and open, all things that Chuck is not. Chuck feels upstaged by Jimmy, who has barged into his corner of the world and muddied it up with jokes and swears.

Chuck resides above the mud; he hates the mud; he wants to be above reproach. But that leaves him a cold, antiseptic figure. There are other characters who fit this description, Howard Hamlin being one of them. But Howard has earnestness. He appears human. He may come off like he’s trying to sell you something, but that desperation behind every movement humanizes him, especially when he wows you with his presentation and expertise.

The cold open with Rebecca is shot in cold, cold tones; over-satured blues and whites that freeze the blood of everyone in the scene. There is no passion between Rebecca and Chuck; just straight conversation, as if pulled from a manual. It sounds like it was written for a TV show. Jimmy breaks that up, and shatters the illusion of perfection that Chuck has so desperately crafted, and Chuck hates him for it.

For all the stories about Jimmy being in jail and how he destroyed he and Chuck’s father, it all comes down to Chuck’s jealousy about Jimmy. Every bad thing that Jimmy has done since the end of the first season is on Chuck’s head. He actively sabotaged Jimmy’s ascent, because Jimmy has what Howard has, and Chuck doesn’t. What draws people to Chuck professionally (dependability, quality of work, calm attitude) drives them away personally, because of what he gives up to have those things. Jimmy can do all that Chuck does, without losing his core spark.

Jimmy tries to escape working with Erin, the SuperAssociate. He takes it as an insult that Davis & Main is babysitting him, but he should take it as a compliment; he crossed a serious, serious line, and their only punishment is supervision. But he can’t see it. The only way Jimmy can process it is as a shot across the bow; as a greater confirmation of the stupidity of the firm itself.

That’s not to say that Erin is a perfect lawyer; far from it. What Jimmy lacks in standards and practices, she lacks in perspective. Her privileged position as an associate for a rich firm skews the way she looks at things. Those public defenders and clerks make very little money, and have very little influence; for all of the talk about Sandpiper and other important cases, people like Billy at the DA’s office and the Beanie Baby Clerk make the wheels turn and turn. Erin calls it a bribe, Jimmy calls it grease; Erin is horrified at the idea of influencing a case in that manner. But that would only matter if everything was on the level in the first place.

That’s what Jimmy gets, and what gets him in trouble; he understands the game too well, having played every side of it. Erin sees only the law, and it’s noble, sure, but it’s easy to be noble when your cases are so big to be abstract. There are hundreds of lawyers working on Sandpiper, and there are only a few lawyers taking hundreds of cases as public defenders. The system is unbalanced, and Jimmy plays it that way. He’s at the wrong firm, and they know it, and he knows it; but there’s nowhere else for him to go, not even HHM.

The only thing to do would be to give Jimmy freedom to do what he wants, and that’s no plan at all.

Kim’s failure is not one of her own making. She trusted Jimmy to be the man she believes him to be, and she trusted Howard to have perspective. She put her faith in the idea that they could do their jobs, and they both screwed up. Jimmy’s is more outwardly stupid, but Howard’s is much, much more selfish. Howard is keeping her in Doc Review because she allowed him to stick his neck out for Jimmy; he’s upset that she wasn’t smart enough to see through Jimmy, and as a result put him in a bad position.

But Kim already gets that. She’s already put her nose to the grindstone, and continued to do so after Howard gutted her after Mesa Verde. She’s already learned her lesson, and had learned it from the moment that got stuck in Doc Review. She’d never snitch on Jimmy, because she does truly, wonderfully, naively believe in him, but she learned not to trust him going forward. Howard is simply making a point to make a point, and he’s hurting the firm.

Kim’ll do fine, eventually. Chuck is a reasonable man, especially when he can be the most heroic person in the room. She might not end up at the top at HHM, like she planned, but she’s a talented enough lawyer to land on her feet somewhere. She’s a self-starter, and all that. Hopefully, by the time Jimmy detonates, once and for all, she’s fifteen states away.

That’s all we can really hope for now.

Mike has spent the better part of two seasons trying to work around the drama in his life. He’s taken odd jobs, both criminal and otherwise, to help his family thrive. He allowed himself to be badly beaten so that he wouldn’t have to pull any more triggers; he let the bag of cash go; he even let Daniel breathe another breath. He’s been taking half-meausres.

I mentioned this last week, but this is not the Mike we come to know later. Mike would’ve dropped all of them, including Nacho, just to make sure. He would know that, just because Tuco was alive, the Salamanca’s would come to his aid. His failure was trying to manage a situation that had long since spun out of control. When you see a forest fire coming over the hilltop, you set your own fires, and burn up all the fuel; you can’t manage what’s already burning. He should’ve shot Tuco, shot Nacho, and shot the vet, too.

Mike has learned his lesson now, with Tio Salamanca sitting across from him, shifting on that cheap vinyl booth. He wanted his cake, and to eat it, too, and he thought that beating would be enough of a sacrifice to keep the worst of the storm off his back. But he knows better now.

Kim does her job, Jimmy gets a babysitter, and Mike learns a lesson in tonight’s Better Call Saul.