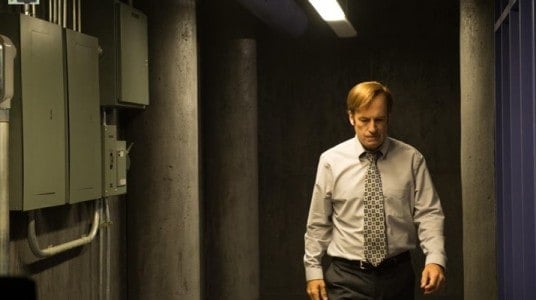 Many years from now, Mike will sit down with a man about to make a decision. He’ll try to convince him to do what must be done; that if he continues to try and work around the problem, he’ll just end up right back where he started. So Walt does; he kills the dealers, and then has Jesse kill Gale, guaranteeing their safety. Though not quite what Mike had in mind, it’s exactly the action he advised taking.

This Mike Ehrmantraut; theÂ Breaking BadÂ Mike Ehermantraut; is not the same person that we see inÂ Better Call Saul. This is an obvious statement, but also an important distinction. The Mike we see later is much colder, and much quicker to act; this Mike, perhaps our Mike, sucks his teeth, and takes punch after punch so that he won’t have to take the life of another human being.

Nacho sees it first, gets it first; he points out that Mike went through a lot of pain and suffering just so that he wouldn’t have to pull a trigger. But I suspect that Mike has pulled his share of triggers, and is actively trying to not be that kind of person anymore. But the problem is that all he’s done is put Tuco off for a few years. All he’s done is kicked the can down the road. He’ll eventually get out of it, because Gus is a million times more powerful than Tuco, but at the time he was willing to risk his safety and the safety of those he loves so that he wouldn’t have to kill him.

Breaking BadÂ Mike would thinkÂ Better Call SaulÂ Mike was a fool. BB!Mike would dump BCS!Mike in a ditch. BB!Mike would’ve shot Daniel in the face, cut Tuco’s throat, and buried Nacho in concrete once he’d collected his money. BCS!Mike will eventually trade his soul for a lot of money, so that his family can live comfortably, and he’ll become a cold blooded killer, because he’ll realize that’s the only way to survive in the world he’s chosen to reside. It’ll eventually be his downfall, too; he’ll eventually become too enamored with his quick decision-making, and misread someone weaker than him as someone less dangerous.

He’ll die on a riverbank, staring at a sunset, while his granddaughter is in police custody.

Jimmy McGill still has a chance.

He still has a chance.

Jimmy, you moron. You stick with Chuck as he suffers, willing to give up law in his presence, but you just can’t think of Kim at the same time? You came to Chuck to bargain? With what? You knew he wouldn’t take you up on your offer. You knew he would back down. You have no intention of being better, or protecting Kim from your mistakes. You went to Chuck because you always go to Chuck; you go to Chuck to prove what kind of man you are. But you keep misreading him; it’s not about results. Chuck more than anyone on the planet believes in doing it the ‘right’ way. For all his flaws, Chuck wants to do it right.

It can’t be now, can it? You can’t be the bad guy yet. You aren’t Saul yet. You aren’t in Omaha yet. You don’t have to run yet. You have things to stay behind for, Jimmy. You have someone who loves you, and a law firm willing to give you as second chance, and a man in Howard Hamlin who stuck his neck out for you.

Just crashÂ the Hindenburg already, Jimmy. Save us all the time.