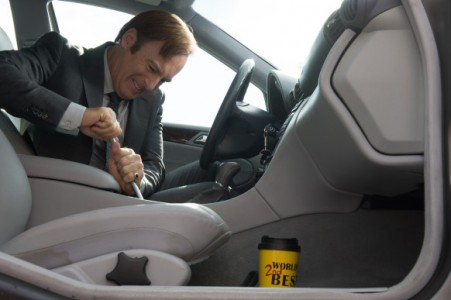 The main that differentiatesÂ Better Call Saul Mike from hisÂ Breaking BadÂ persona is the way he deals with danger. InÂ Breaking Bad, Mike singlehandedly took down an entire factory of guys to rescue one of his own. He also shot the guy he rescued in the leg to make sure he knew the rules from now on. InÂ Better Call Saul, Mike goes out of his way to avoid violence, and tries to wave the stick instead of actually using it. Him sitting down with Hector Salamanca was dangerous, and stupid; he made a lot of cash doing so, but he risked his life, and possibly the lives of his daughter-in-law and granddaughter.

Where this Mike will ultimately fall short, and what will ultimately lead to his transformation into a colder, leaner, more focused killer, is that he thinks that by avoiding violence, he’s doing the right thing. But he’s not; he’s standing on a beach, drawing lines in the sand, and then waiting for the tides to wash them away. He’s not actually doing good, nor is he trying to do good; he’s just waiting for the right situation to wash away the line he’s drawn. First, he wasn’t going to be a criminal; then he went and took jobs from the vet. Then, he wasn’t going to get involved in heavy ; and then, he went and let Tuco beat the hell out of him. And then, still further, he wasn’t going to commit violence; and then, once again, the line was erased, and he went to a meeting knowing their was a fifty-fifty chance that he would have to kill at least one person.

You can wave this away as not his fault; there’s an argument to be made that he’s just a victim of circumstance. But from where I stand, his family lives in an okay neighborhood, and they make okay money, and they struggle, but they have a path forward. Mike taking these jobs makes things easier, but it’s not an imperative. The impetus for Mike to take these jobs is because Mike likes these jobs. Mike is good at these jobs. Mike is not a cruel person, nor does he take joy in the killing of other human beings. But Mike likes this, and he’s always liked this. Mike’s son wasn’t a better person because he didn’t break the law as a police officer; he was a better person because he didn’t want to.

Mike is in the thick of things now. Hector Salamanca is not that far off from Gus Fring, and a much larger role in the criminal world. InÂ Breaking Bad, Mike is forced to flee the park where his granddaughter is playing, so that he won’t get taken down by the police. But this Mike never would’ve done that. He wouldn’t have left Kaylee on her own. But he’s well on his way to that colder, more pragmatic persona, and it’s just a matter of time before he starts pulling triggers for a lot more than twenty-five thousand dollars.

Kim has escaped the mail room, but Howard is still giving her the cold shoulder. Chuck has spoken on her behalf, and it appears that Howard is upset. But what is so great about Howard is that you never actually know where he is, emotionally. When Howard and Kim take that long walk from her office to the Â conference room, he’s stone-faced. There isn’t a blink of energy, or a measure of softness, anywhere on his body. But when they are about fifteen feet from the room, a smile comes onto Howard’s face, and it grows and grows like a mural being hastily drawn on a brick wall, until it’s thatÂ brilliant, charming grin that makes everyone feel at ease.

You can understand, then, why Kim would consider jumping ship. Schweikart is a rich, powerful firm, with money and resources and clout that Hamlin, Hamlin and McGill can only dream of. Schweikart hires lawyers like Kim everyday; it’s nothing for them to pay off their student loans, and give them a nice office, and saddle them up with a gorgeous brand new car. Schweikart hires lawyers like her so that, from top to bottom, they are staffed with talent. If they decide to go to war on a trivial matter, they have a lawyer with experience and brains taking the reigns every step of the way. It reminds me of McCann-Erickson inÂ Mad Men; the best talent is here, and they’re all working on it together.

The problem with a place like that is that you are just another cog in the machine. Kim would be SmartÂ Associate #8123213, and nothing more. Even if she were to rise above and make partner, she’d still be Power Partner #23435, because for a firm that big, partnership is nothing. Kim will eventually make seven to eight figures a year, eat at the finest restaurants, and have wait staff and valets make stupid jokes for tips, and she’ll still just be a part of the machine.

It’s important to note, too, that being a cog isn’t an insult. It’s just a fact. The price you pay for individuality is less money, less power, and less security. HHM is a medium firm that would give her more room to breathe, but it will never offer her the life Schweikart could. In the end, it really comes down to whether Kim prefers the security of Schweikart to the possibility of HHM; does she believe Howard will continually breathe down her neck, and make her miserable, or does she believe she’ll find her footing, and survive to see a corner office?

The decoration of a home is important, more so than people realize. You come to understand it when you go from hotel room to hotel room, from pre-furnishedÂ apartment to pre-furnished apartment. The bedsheets and blankets; the glasses and silverware; the cheap paintings and baskets, placed on the walls by another personality. It makes it feel like a movie set; it makes you feel like you don’t belong. It’s hard enough to feel at home when the smell of new carpet hangs in the air.

Jimmy has two floors, and all of it feels impersonal. He takes the potpourri balls, and he kicks and throws and tosses them around. It’s ostensiblyÂ to help him fall asleep, but it’s also about engaging with his surroundings. There isn’t a single thing in that apartment—not a book, or a video game, or a movie, or a half-deflated soccer ball— that he can use to pass the time. There is nothing of him there. He owns nothing, and bought nothing; he didn’t go to Wal-Mart and run his hands over a cheap plastic vase that reminded him of something his family had in the living room.

So he leaves. He goes to the only place that is his. Jimmy squeezes into his home at the back of the salon, and sleeps on the ratty, dirty pullout couch, and finally, he can fall asleep. In the morning, he makes a point of telling the salon owner that he’s paid up, and is a legal tenant, and as such he can come back anytime he wants. This is important to him, because it’s something that he chose, and that he put himself into. His money. Not charity.

The car bugs him, because the cup that Kim gives him doesn’t fit. It just won’t go into the cupholder. So he rips out the cupholder, and shoves the cup in, and he goes about his way. Jimmy is going to live the life he’s going to live, and if he has to stretch it and pull it and tear it apart to fit the things that he wants into it, then he will. But the thing that he doesn’t realize is that if you have to tear things apart to get them to fit; if you take the puzzle piece and shove it in a shape that it doesn’t fit; then all your left with is a picture without meaning, or coherence.

Kim finds her footing, Jimmy can’t sleep, and Mike deals with a new foe in the sixth episode of Better Call Saul.